MINUSTAH: Keeping the peace, or conspiring against it? (Other Worlds)

By: Deepa Panchang, Another Haiti Is Possible Co-Coordinator, Other Worlds 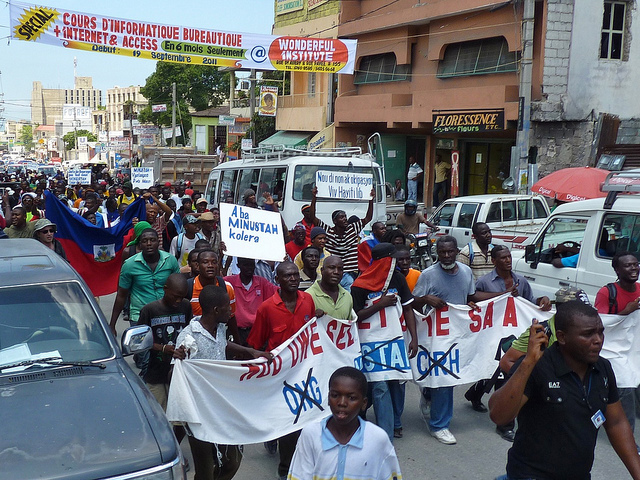 Nou dwe sèl mèt bout tè sa a: We should be the only owners of this land.

This was Haitian protesters’ message at a demonstration last month against the UN peacekeeping mission in Haiti, known by its French acronym, MINUSTAH. October marks an upswing in press coverage and anti-MINUSTAH activity in Haiti in anticipation of Friday’s UN Security Council meeting, during which officials will vote on renewing the mission’s term for another year. Protests against the 7-year-old force have intensified since fall 2010, with heightened mobilization by grassroots groups calling for the withdrawal of the foreign troops from Haiti. Meanwhile, Brazil’s foreign minister, representing the country that contributes the largest troop contingent to MINUSTAH, has publicly announced a reduction in the number of troops amid mounting discussion in diplomatic circles about downsizing the force.

What is behind the building grassroots opposition to the UN mission? In the eyes of many Haitians, MINUSTAH’s impact in the country plays out very differently from its stated objectives of ensuring a secure and stable environment, supporting fair electoral processes, and protecting human rights. Fueling much of the recent criticism is MINUSTAH’s introduction of cholera into Haiti in October 2010, starting an outbreak that has now killed more than 6,000 people and led to almost half a million documented cases of illness from the disease. The negligence that led to this outbreak and the UN’s failure to assume responsibility for it were the latest affronts in a string of problems with MINUSTAH’s presence in the country. These include documented human rights violations.  MINUSTAH has been ineffective in protecting Haitians from day-to-day insecurity, gender-based violence, and forced evictions from displacement camps. Furthermore, its troops have been active perpetrators of human rights offenses. Sexual exploitation and rape of Haitians, violent retaliations against peaceful popular protest, and failure to investigate charges of murder by its own members have tainted the force’s record. Crackdowns on demonstrations, besides violating protesters’ rights, serve to suppress the grassroots and civil society groups that are struggling to make their voices and vision a part of national dialogue on rebuilding. And MINUSTAH’s public statements of support for recent fraudulent elections – in which the majority of the electorate did not participate – further erode the democratic process.

To take action on this issue and join Haitian groups demanding MINUSTAH’s withdrawal from Haiti, sign onto this open letter.

A white paper co-authored by Other Worlds staff Deepa Panchang and released by HealthRoots Student Organization at the Harvard School of Public Health on October 4, “MINUSTAH: Keeping the peace, or conspiring against it?” enumerates in detail MINUSTAH’s post-earthquake human rights record. It also explains the political context behind the force’s presence in Haiti. Excerpts from the white paper’s executive summary follow.


Excerpts, “MINUSTAH: Keeping the peace, or conspiring against it?”

In the year and a half since the earthquake in Haiti, the United Nations Stabilization Mission in Haiti (MINUSTAH by its French acronym) has expanded its role in the name of security, stability, and relief. However, since its establishment in 2004, multiple independent human rights organizations have documented myriad violations of the human rights of Haitians. These transgressions have continued unchecked since the earthquake, positioning MINUSTAH as a threat to Haitian stability and security instead of a safeguard. Accompanying these abuses are domestic and international voices of protest, bolstered by human rights reports and leaked documents and cables demonstrating that the motivations of MINUSTAH and its members are not focused on Haiti. Further, permission for MINUSTAH’s presence was granted by an unconstitutional, unelected government after the democratically-elected President Jean-Bertrand Aristide was ousted from office in an internationally-backed coup. When MINUSTAH is understood as part of a geopolitical strategy rather than a humanitarian peace mission, it is clear why such an unsuccessful and unpopular operation continues to be renewed year after year.

Less than a year after the first soldiers landed on Haitian soil, independent humanitarian organizations documented cases of robbery, murder, assault, rape, and sexual exploitation of minors.[1] Evidence grew that MINUSTAH ignored extrajudicial, paramilitary killings of civilian groups mobilizing to protect their communities. Worse, it sometimes acted as the guerillas’ personal security force.[2] These missions often cost innocent lives, as entire neighborhoods were assaulted by military strikes involving tens of thousands of rounds of ammunition, bombs, and armored vehicles. These offensives, conducted by an occupying military force in a peacetime sovereign nation, violate MINUSTAH’s charter and international law. Nevertheless, MINUSTAH’s mandate allows for judicial immunity from Haitian law for its soldiers. Since its inception, hundreds of soldiers implicated in crimes have escaped prosecution because of this clause.[3]

Since the earthquake, these problems have worsened. MINUSTAH fails to effectively monitor internally displaced people (IDP) camps, often only patrolling outside them. In any case, the forces do not speak the language, and often have not arranged for sufficient translation capacity, despite UN presence in Haiti for almost 20 years. MINUSTAH also fails to engage the many grassroots organizations dedicated to IDPs, gender-based violence, or protection against forced eviction. Hundreds of cases of sexual assault, rape, and gender-based violence by MINUSTAH soldiers were reported in pre-earthquake Haiti. After the earthquake, such abuses, often of children, continue.[4]

Ten months after the earthquake, MINUSTAH troops, failing to take basic sanitation precautions by dumping human feces into a nearby river used for drinking, started a cholera epidemic that, to date, has killed more 6,000 people and crossed into the Dominican Republic. Despite eyewitness reports, and epidemiological and genetic studies proving that MINUSTAH was the source, the UN failed to take responsibility for nearly a year.

Contrary to its mandate to assist in free and fair elections, MINUSTAH played a role in an illegitimate presidential election in fall of 2010 that saw the exclusion of numerous political parties—including one of Haiti’s largest—and a large part of the population.

MINUSTAH’s continued presence is justified by the levels of unrest, or potential for unrest, in Haiti. In fact, the member countries involved in the mission, such as Brazil, have up to more than triple the murders per capita than Haiti. Since the earthquake, the only significant civil discord in the country has targeted MINUSTAH for introducing cholera or failing to respond to IDP camp conditions, or expressed anger over fraudulent elections. MINUSTAH responded to these peaceful protests with violence, including tear gassing students and IDPs, assaulting international journalists, shooting at children and even killing peaceful protestors.[7]

MINUSTAH has been destabilizing Haiti and violating human rights since its arrival, and has continued this trend after the earthquake. In addition to violent abuses, MINUSTAH’s introduction of cholera and failure to accept responsibility for it demonstrate a systemic problem with the entire mission and the way it interacts with Haiti. Just like the earthquake and the subsequent cholera outbreak, MINUSTAH, as a disaster with widespread adverse effects, has brought Haitians together in nonviolent yet persistent solidarity against it. But these outcries are repeatedly violently silenced by MINUSTAH.

MINUSTAH acts against Haitian interests in order to meet the geopolitical or economic needs of foreign nations or those seeking to ingratiate themselves to those nations. Rather than the instability and violence MINUSTAH uses to justify its existence—which has failed to rear its head since the earthquake—it is MINUSTAH itself that threatens security and advancement.

At such a crucial point in Haiti’s history, and with years of failures, inaction, repression, and human rights violations documented, it is time that MINUSTAH respect the Haitian people’s wishes, and the wishes of many of its members’ citizens, and withdraw from Haiti. Arguments of greater instability cannot justify the current abuse and violence against Haitians. Just as no concern of post-MINUSTAH instability can justify a single violation of a Haitian’s rights by an occupying force, no solution to Haiti’s problems can include foreign armed military on its soil. If the UN and its members want to support Haiti, MINUSTAH’s nearly one billion USD yearly budget should be put toward sanitation, shelter, health, infrastructure, and education, not arms and soldiers that result in death, sexual assault, and the subversion of democracy.

Deepa Panchang is the Another Haiti is Possible Co-Coordinator forOther Worlds. She has engaged in advocacy for human rights in Haiti since the 2010 earthquake.You can access all of Other Worlds’ past articles regarding post-earthquake Haitihere.