We Are Tired of Living under Tents (Other Worlds)

By Alexis Erkert, Another Haiti Is Possible
October 6, 2011 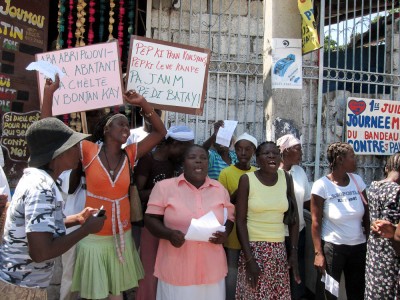 On Monday morning, October 3, ten women stood across the street from the Ministry of Social Affairs, waving their arms, wailing and chanting. They were calling on Osany, of the pantheon of vodou lwa, or spirits, for assistance. The lyrics of their chant, repeated over and again, were patently simple:

The Creole word for “poor,” malerè, also means miserable. And the litany of the women’s sources of misery is overwhelming: aging tents, shredding tarps, heat, rain, wind, high blood pressure, colds, body aches, cholera, rats, cockroaches, raw sewage, no potable water, no privacy, no security. One is a single mom with a 2-month old. And they are all facing eviction from Vilaj Fratènite, Brotherhood Village, the displacement camp where they have lived since the earthquake.

Monday was World Habitat Day, established by the UN in 1986. The month of October is annually one in which movements and organizations around the world mobilize for housing rights and in opposition to evictions.

According to the International Organization for Migration (IOM) and the United Nations Office for the Coordination of Humanitarian Affairs, 595,000 Haitians are still living in camps – half of the total number displaced by the earthquake 21 months ago. And, despite last year’s ruling by the Inter-American Commission on Human Rights that the Haitian government impose a moratorium on all evictions, the government has not stepped in to keep private landowners and local government officials from forcing displaced people off both public and private land. IOM reported that the number of camps under threat of eviction increased by 400% per cent between July 2010 and July 2011.

Although conditions in the camps are abominable, residents that remain in the camps – facing the challenges that the women from Brotherhood Village enumerated above – do so simply because they have no better options. Summed up one member of the group, “That’s how we live now. But where will we go when we are evicted? We have nowhere to go.”

Homeless people and their allies have begun to vocally insist on their democratic right to participate in planning the reconstruction of their homes, communities, and nations. It is acknowledged in the UN Guiding Principles on Internal Displacement that displaced people should be able to participate in the “in the planning and management of their return or resettlement.” Yet the government has consistently excluded the vast majority, including those directly impacted. Although various housing plans are being drafted by the government and international agencies, human rights lawyer Patrice Florvilus says, “If it’s decided without us, it won’t help us.”

President Michel Martelly’s housing plan, referred to as “sixteen-six,” includes provisions for the relocation of six larger, more visible camps to sixteen rehabilitated neighborhoods. As for how those ten women calling out to Osany might benefit, there may as well be no plan. The same goes for residents of the 184 other displacement camps that are not addressed by Martelly’s program.

Patrice went on to point out that the housing repair projects being led by many international agencies throughout earthquake-damaged areas benefit those who were  homeowners before the earthquake. While this is helpful, it does not address the needs of the renters and homeless, who are the most vulnerable. “What housing projects are targeting the people that need housing the most?” he asked.

In response, the Force for Reflection and Action on Housing (FRAKKA), a collective of 30-some committees and associations from displacement camps, formed to advocate for secure and dignifying housing for all, as well as to combat forced evictions. More recently, a group called the Housing Rights Collective, which includes FRAKKA and other organizations, have been attempting to create possibilities for camp residents to organize, collectively determine their needs and priorities, and form strategies to achieve them.

Nou bouke viv anba tant, We are tired of living under tents, was the slogan for three days of events, from October 1-3, planned by the Housing Rights Collective to mark World Habitat Day. Events included a forum, skits and cultural activities in Camp Corail-Cesselesse, and a rally in front of the Ministry of Social Affairs. Allies from the International Alliance of Inhabitants, the Zero Evictions Movement, COOPHABITAT in the Dominican Republic, and housing cooperative movements in Puerto Rico and Cuba came to Haiti to lend support, reminding displaced Haitians that they are not isolated in their struggle.  They also shared strategies from their own successes in winning housing.

Forum participants included approximately 120 camp residents and members of camp committees or associations. An emphasis in the discussion was on evictions. Testimonies from camp residents who have already experienced forcible and often violent evictions resonated deeply with others in attendance. With no clear housing strategy in place, most expressed fear that they will eventually be forced to leave the camps without being provided alternative places to live.

“We have rights! Just like everyone else, we have the right to see our children live like other children. We have the right to sleep like other people, without rats crawling over us or rain dripping on us,” Marie-Helene Moïse, 32 years old and with two children, who has been living in Camp Kid since the earthquake, stood up and said. “When you say you live in a camp, people look at you like you’re inferior. We suffer and our people are not standing up for us. Morning, noon, night… it’s not possible to live well in the camps. The Haitian government needs to remove us from these conditions because we can’t keep going. My friends, this is why World Habitat Day should be so significant to those of us living in tents. Today, we’re reflecting, but there will be action to come.”

During the rally, some of that action was visible in front of the Ministry. Spirited protestors, mostly women, including the group from Brotherhood Village, waved hand-written signs:

“We are not made to live under the rain.”

“January 12 took most of what we own. We won’t let rain and hurricanes wash us away with the little that is left.”

“We are people. We want homes.”

As for solutions? A letter drafted by camp committees and other grassroots groups and delivered during the protests requested that the Ministry: help to apply the Inter-American Human Rights Commission ruling to stop forced evictions; take leadership in creating a national housing plan, complete with zoning regulations; begin public housing projects for earthquake survivors; ensure that a housing fund be part of the national budget; and, finally, give the Public Office for Public Housing Promotion (EPPLS by its French acronym) the means and the power to execute a public housing plan.

More advocacy initiatives are being planned, including meetings with the parliament and chamber of deputies to discuss budgeting for public housing initiatives, and meetings with local magistrates to request their assistance in curbing forced evictions. FRAKKA and the newly formed pro-bono legal office started by Patrice Florvilus, Defenders of the Oppressed (DOP), are joining forces to provide legal training to camp residents. The International Lawyers Office (BAI) is carrying out similar work, conducting advocacy for housing rights and fighting forced evictions.

Today the Haitian popular movement (the succession of grassroots groups and progressive non-profit organizations that have led movements for alternative social, economic and political systems) is small and faces numerous challenges. The movement still bears the scars of past political divisions and for many, the risk of being outspoken is great. Despite relative civil liberty in Haiti today, ongoing beatings and arrests of activists at anti-eviction demonstrations have been a reminder of that risk. Progress is also often obstructed by lack of resources.

Given the size and desperation of Haiti’s displaced population, right to housing and anti-evictions work is necessarily one of the main foci of the popular movement. As time passes without adequate solutions from the government and international agencies, camp residents are growing increasingly exasperated.

In her introduction to Saturday’s forum, Lisane André of GARR reminded participants of the proverb, Se kolòn ki bat, It is a column that wins. She explained: “When we are faced with a struggle and we separate, each working individually, it will take a long time to achieve results, if they’re achieved at all. Instead, if we all come together, if we create a chain, if we stick together, if we form a column… We can achieve victory despite the odds.”

“We are a collective,” she cried, her voice ringing out, “And we invite everyone to join us in the movement for housing.”

Click here to participate in calling for an end to forced evictions.

For a more in-depth look at the current housing situation, see the Institute for Justice and Democracy in Haiti’s new report, “Haiti’s Housing Crisis”.

Alexis Erkert is the Another Haiti is Possible Co-Coordinator for Other Worlds. She has worked in advocacy and with the Haitian social movement for the past three years.You can access all of Other Worlds’ past articles regarding post-earthquake Haiti here.