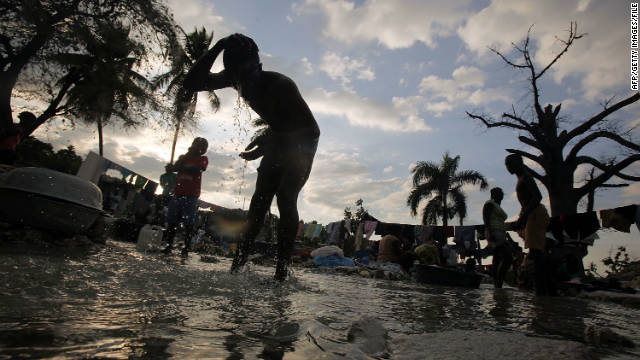 The widespread use of river water in Haiti rapidly spread cholera thorughout the country after the January 2010 earthquake.

(CNN) — More than 5,000 Haitian cholera victims have filed a petition with the United Nations, demanding millions of dollars in compensation for their suffering in an epidemic widely blamed on Nepalese peacekeepers, the victims’ lawyers said Tuesday.

The epidemic, which has killed 6,700 people and sickened 485,000, was linked to peacekeepers from Nepal, according to a report released in May by an U.N.-appointed panel of experts.

The strain of cholera did not originate in Haiti, the report said, but was “very similar” to those circulating in South Asia.

The victims filed their petitions with the claims unit of the U.N. Stabilization Mission and at the United Nations in New York, said one of their lawyers, Brian Concannon of the Boston-based Institute for Justice and Democracy in Haiti.

Concannon said Haitians who were sickened are demanding $50,000 each; the loved ones of those who are killed are seeking $100,000.

The victims want acknowledgment from the United Nations that it was responsible for the epidemic after fecal matter from a U.N. camp where the Nepalese were based was improperly dumped into the Artibonite River after the January 2010 earthquake.

The report from May said, “this contamination initiated an explosive cholera outbreak downstream in the Artibonite River Delta and eventually throughout Haiti.”

Cholera spread rapidly in a nation still reeling from the devastating quake.

“This explosive spread was due to several factors, including the widespread use of river water for washing, bathing, drinking, and recreation,” the report said. There was “regular exposure of agricultural workers to irrigation water from the Artibonite River.”

He said his clients were challenging the institution to act consistently with what it knows to be true and just.

At first, the United Nations resisted the idea that the outbreak may have stemmed from its peacekeepers.

A French epidemiologist, Dr. Renaud Piarroux, suggested in December that the Nepalese were the source of the outbreak. But a U.N. Stabilization Mission spokesman said the agency was skeptical about the doctor’s report.

There is little precedence for compensation demands and lawsuits against peacekeepers in Haiti. The global body signed a Status of Forces agreement with the Haitian government in 2004 that provides immunity for soldiers serving under its banner.

If the U.N. Stabilization Mission does nothing, the Haitian cholera victims may not have other legal avenues.

If the United Nations knew that it was responsible for the cholera outbreak and was stonewalling, that may be a violation of the agreement.

Phone calls to the U.N. Stabilization Mission were not immediately returned Tuesday.