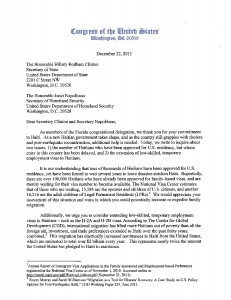 ongress of the United States

As members of the Florida congressional delegation, we thank you for your commitrnent to Haiti. As a new Haitian government takes shape, and as the country still grapples with cholera and post-earthquake reconstruction, additional help is needed. Today, we write to inquire about two issues: 1) the number of Haitians who have been approved for U.S. residency, but whose enty to this country has been delayed, and 2) the extension of low-skilled, temporary employment visas to Haitians.

It is our understanding that tens of thousands of Haitians have been approved for U.S residency, yet have been forced to wait several years to leave disaster-stricken Haiti. Reportedly, there are over 100,000 Haitians who have already been approved for family-based visas, and are merely waiting for their visa number to become available. The National Visa Center estimates that of those who are waiting, 15,584 are the spouses and children of U.S. citizens, and another 16,216 are the adult children of Legal Permanent Residents (LPRs).1 We would appreciate your assessment of this situation and ways in which you could potentially increase or expedite family mlgration.

Additionally, we urge you to consider extending low-skilled, temporary employment visas to Haitians – such as the H-2A and H-2B visas. According to The Center for Global Development (CGD), intenational migration has !ifted more Haitians out of poverty than all the foreign aid, investment, and trade preferences extended to Haiti over the past thirty years, combined.2 This migration has drastically increased remittances to Haiti from the United States, which are estimated to total over $2 billion every year. This represents nearly twice the amount the United States has pledged to Haiti in assistance.

Since remittances undoubtedly play such a huge role in Haiti’s reconstruction and stabilization efforts, it is critically important that we explore additional ways to Haitians. Lowskilled, temporary employment seems to be one way in which a limited number of Haitians may come to the United States, reunite with their families, help build the U.S. economy, and, most importantly, assist Haiti in its reconstruction through repatriated skills and capital.

As you know, Haiti is not included on the list of nations eligible for participation in the H-2A and H-2B temporary worker programs. While individual Haitians are sometimes permitted visas, these cases are rare and are only done on a case-by-case basis as determined by the Secretary of Homeland Security. We would appreciate your assessment of why these programs exclude Haitians, and what specific steps the Haitian government could take that would lead to its inclusion.

These issues are of great importance to the Haitian diaspora community and to our Florida constituents. Thank you for your attention to these matters, and we greatly look forward to your response.

1 Annual Report of lnunigrant Visa Applications in the Family-sponsored and Employment-basεd Preferences registered at the National Visa Center as of November 1, 2010. Accessed online at http://travel.state.gov/pdf/WaitingListItem.pdf  (September 21, 2011).