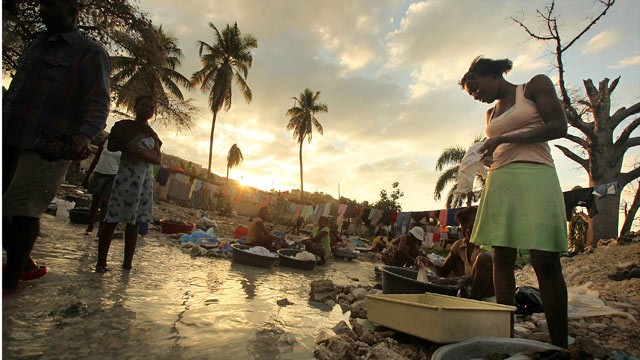 Compelling new scientific evidence suggests United Nations peacekeepers have carried a virulent strain of cholera — a super bug — into the Western Hemisphere for the first time.

The vicious form of cholera has already killed 7,000 people in Haiti, where it surfaced in a remote village in October 2010. Leading researchers from Harvard Medical School and elsewhere told ABC News that, despite UN denials, there is now a mountain of evidence suggesting the strain originated in Nepal, and was carried to Haiti by Nepalese soldiers who came to Haiti to serve as UN peacekeepers after the earthquake that ravaged the country on Jan. 12, 2010 — two years ago today. Haiti had never seen a case of cholera until the arrival of the peacekeepers, who allegedly failed to maintain sanitary conditions at their base.

“What scares me is that the strain from South Asia has been recognized as more virulent, more capable of causing severe disease, and more transmissible,” said John Mekalanos, who chairs the Department of Microbiology and Immunobiology at Harvard Medical School. “These strains are nasty. So far there has been no secondary outbreak. But Haiti now represents a foothold for a particularly dangerous variety of this deadly disease.”

More than 500,000 Haitians have been infected, and Mekalanos said a handful of victims who contracted cholera in Haiti have now turned up in Venezuela, the Dominican Republic, and in Boston, Miami and New York, but only in isolated cases.

How cholera landed in Haiti has been a politically charged topic for more than a year now, with the United Nations repeatedly refusing to acknowledge any role in the outbreak despite mounting evidence that international peacekeepers were the most likely culprits. The UN has already faced hostility from Haitians who believe peacekeeping troops have abused local residents without consequence. They now face legal action from relatives of victims who have petitioned the UN for restitution. And the cholera charge could further hamper the UN’s ability to work effectively there, two years after the country was hobbled by the earthquake.

Over the summer, Assistant Secretary General Anthony Banbury told ABC News that the UN sincerely wanted to know if it played a part in the outbreak, but independent efforts to answer that question had not succeeded. He said the disease could have just as easily been carried by a backpacker or civilian aid worker.

Banbury said the UN, through both its peacekeeping mission and its civilian organizations “are working very hard … to combat the spread of the disease and bring assistance to the people. And that’s what’s important now.”

“The scientists say it can’t be determined for certainty where it came from,” Banbury said. “So we don’t know if it was the U.N. troops or not. That’s the bottom line.”

A UN spokeswoman repeated the answer when asked again last week: “The [scientists] determined it was not possible to be conclusive about how cholera was introduced into Haiti,” said the UN’s Anayansi Lopez.

But ABC News has interviewed several top scientists involved in researching the origins of the cholera outbreak, and each expressed little doubt that the UN troop was responsible. The reason: A genetic analysis of the strain found in Haiti matches identically the one involved in an outbreak in Nepal in August and September of 2010; The Nepalese peacekeeping troops deployed for Haiti at precisely that time; Two weeks before the outbreak, Haitians had reported sanitary breakdowns at the Nepalese encampment set along a tributary to the Artibonite River, about 60 miles north of the capital Port Au Prince. The next month, the earliest cases of cholera surfaced in the same remote area, from Haitians who had been drinking and bathing in the river.

“The scientific debate on the origin of cholera in Haiti existed, but it has been resolved by the accumulation of evidence that unfortunately leave no doubt about the implication of the Nepalese contingent of the UN peacekeeping mission in Haiti,” said French epidemiologist Renaud Piarroux, whose research on the outbreak was published by a U.S. Centers for Disease Control journal.

Mekalanos agreed, saying the single strongest piece of evidence came from the genetic analysis of the strain, which he said was virtually identical to strains that caused cholera in Nepal around the time that the troops shipped out. Taken in concert with sanitation problems at the Nepalese base, which was located near the epicenter of the outbreak, he said “almost any other explanation I can think of is well behind in confidence to the likelihood that that strain was introduced by UN troops,” he said.

“It’s outrageous for the UN to try to deny responsibility for bringing cholera to Haiti,” said Mark Weisbrot, co-director of the Washington-based Center for Economic and Policy Research, whose group has been monitoring relief efforts in Haiti. “Was it gross negligence on their part? This is one of the questions they won’t have to answer if they can sweep this whole thing under the rug.”

Experts said understanding the origin of the outbreak is important. Louise C. Ivers, an infectious disease specialist and professor of global health and social medicine at Harvard Medical School, published a paper this week that traced spread of cholera back to the first victim, a mentally ill man who ingested contaminated river water. She witnessed firsthand the destruction it caused as hundreds of villagers started dying from an unfamiliar malady.

“It was overwhelming,” she said. “There were no reported cases in Haiti before 2010, ever. Really people had no idea what was happening. To hear the fear and the suspicions and the lack of understanding about how this was happening is very, very sad. The outbreak put a huge stress on what was already a very fragile health system. I’m afraid it will be a problem for the foreseeable future.”

She said what has made Haiti so vulnerable was a lack of latrines and clean potable water. She said there have been small outbreaks in the Dominican Republic, but nothing on the scale of what hit Haiti because conditions are more modern and sanitary.

Mekalanos said there are steps that the UN and other aid organizations can and should be taking if they are sending workers from an area where cholera is active into a region where it has long been absent. In the future, he said, the UN might consider giving troops a prophylactic dose of antibiotic before deploying. Or they could do more to insure proper sanitary conditions at UN encampments.

With the likelihood that cholera will be part of the landscape in Haiti for decades to come, though, Mekalanos said his hope is that the missteps that brought the ugly strain of the disease from Asia to the west will not repeat and lead to its further spread.

“Cholera is a disease of the impoverished,” he said. “When the standards of living are already at the lowest levels, cholera is a killer of historic proportions. If it spreads to other parts of the world, in those kinds of settings, I fear there will be a very high rate of death.”

UN officials said Banbury is currently in Haiti, “actively discussing with the Mission what more the UN can do to help Haiti deal with the outbreak.”