Press Release: Two Years After The Earthquake, Where Did The Money Go? Human Rights Groups Urge Immediate Changes In The Recovery Effort (English) 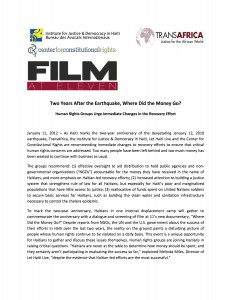 As Haiti marks the two-year anniversary of the devastating January 12, 2010 earthquake, TransAfrica, Institute Of Justice & Democracy In Haiti, Let Haiti Live and The Center For Constitutional Rights are recommending the immediate changes to recovery efforts  to ensure that critical human rights concerns are addressed. Too many people have been left behind and too much money have been wasted to continue with business as usual.

The groups recommend: (1) effective oversight of aid’s distribution to hold public agencies and non-governmental organizations (“NGOs”) accountable for the money they have received in the name of Haitians, and more efforts on Haiti-led recovery efforts; (2) increased attention to build a justice system which strengthens rule of law for all Haitians, but especially for Haiti’s poor and marginalized population that have little access to justice; (3) reallocation of funds spent on United nation’s soldiers to secure basic services for Haitians, such as building the clean water and sanitation infrastructure, necessary to control the cholera epidemics.

To mark the two-year anniversary, Haitians in one internal displacement camp will gather to commemorate the anniversary with a dialogue and screening of Film at 11’s new documentary, “Where Did the Money Go?” Despite reports from NGOs, the UN and the U.S. government about the success of their efforts in Haiti over the last two years, the reality on the ground paints a disturbing picture of people whose human rights continue to be violated on a daily basis. This event is a unique opportunity for Haitians to gather and discuss these issues themselves. Human rights groups are joining Haitians in raising critical questions. “Haitians are never at the table to determine how money should be spent, and they certainly aren’t participating in evaluating the success so far,” explaining Melinda Miles, Director of Let Haiti Live, “despite the evidence that Haitian-led efforts are the most succesful.”

“We must learn from the mistakes of the first two years of this recovery effort,” explained TransAfrica President Nicole Lee. “Without the active participation of Haitians themselves, no amount of money can bring the kind of changes Haiti needs to resolve the problems that have plagued the most marginalized populations since even before the earthquake.”

Michele Mitchell, director of “Where Did the Money Go?” noted that, “Half of all U.S. households donated $1.4 billion to major charities specifically for relief. But after hundreds of millions have been spent, there are still over half a million people living in squalid conditions.”

Meanwhile, what has become the world’s worse cholera epidemic is killing an average of 200 Haitians per month, and sickening over 25,000. “The United Nations’ own report establishes that UN peacekeepers introduced cholera to Haiti,” said Brian Concannon, Jr., Director of the Institute for Justice & Democracy in Haiti (IJDH), which filed a lawsuit against the UN in November on behalf of over 5,000 victims of cholera. “The UN’s security force MINUSTAH continues to spend $2.2 million per day in a country that has not had a war in 50 years, despite large scale protests by Haitian civil society calling for
their withdrawal. We urge the UN to instead invest this money in building the clean water infrastructure necessary to control the cholera epidemic and to compensate victims of its negligent introduction of cholera.”

With more than 500,000 women, men and children still in approximately 800 displacement camps in and around Port‐au‐Prince, Laura Raymond from the Center for Constitutional Rights (CCR) highlighted that, “The conditions in the displaced persons camps are abysmal, particularly for women and girls who too often are victims of gender‐based violence. Why have only 94,000 transitional shelters been built to date despite a stated goal of 125,000 in the first year? Oversight of and accountability to the reconstruction plans, many of which have received substantial funding, is urgently needed.”