By MADRE, the Commission of Women Victims for Victims (KOFAVIV), the International Women’s Human Rights (IWHR) Clinic at the City University of New York (CUNY) School of Law, the Global Justice Clinic at NYU School of Law (GJC) and the Center for Gender & Refugee Studies at UC Hastings College of the Law (CGRS)
January 12, 2012 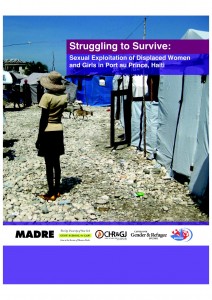 Two years after an earthquake devastated Haiti, a report detailing the impact of sexual exploitation on displaced Haitian women and girls has been released. Displaced women and girls have lost family and community members, along with the protection and safety nets those relationships offered. Because of poverty and a lack of economic opportunity, many women and girls are forced to trade sex for shelter, money or even a single meal.

The report was compiled based on interviews with Haitian women and girls who have either engaged in transactional sex or who know people who have. Information was also collected through interviews with Haitian government officials, service providers and women’s rights advocates. The report highlights current barriers to addressing sexual exploitation and offers recommendations to protect the human rights of women and girls engaging in transactional sex. In addition, the report offers a unique legal analysis of the protections available for women and girls who have experienced a wide range of human rights violations associated with sexual exchanges.