In a 2011 Forum on the Crisis of Housing in Haiti, a group of camp residents and advocates asked “grassroots organizations and all other movements to mobilize with us on the housing issue so that we can achieve this dream of justice and liberty.” Today, with more than 500,000 people still living under sun-scorched tarps two years after the earthquake of January, 2010, the Haitian housing rights movement continues to gain urgency. Demanding comprehensive housing policy in the long term and decent, secure housing in the short term, the groups that comprise the movement have created detailed prescriptions for how to resolve the crisis. They are up against a lot, however, since most entities in charge of housing have not sought to “mobilize with” the movement; rather, they have come in with their own ideas. 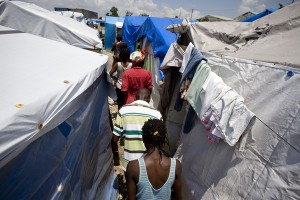 The housing projects touted as the solutions to Haiti’s displacement crisis have foreign corporations and academic institutions at the helm. The story of housing serves as a revealing case study wherein foreigners with little understanding of Haitian needs are designing the kinds of communities Haitians should live in. As the first in a series of articles on disaster capitalism in Haiti, we go back to just months after the earthquake, when the private sector was explicitly put in charge of developing some of Haiti’s only formal housing plans. What transpired helps explain why so many earthquake victims remain mired in desperation to this day.

The Interim Haiti Reconstruction Commission, the group mandated with directing reconstruction and co-led by Bill Clinton, failed to develop a plan for large-scale housing provision before its mandate ran out this past October. Of the housing plans the group did approve, the most prominent were turned over to a bevy of foreign, private entities. The troubling flaw of this contracting and consulting scheme is that it is entirely unaccountable to the Haitian people. The parties are not monitored by Haitians. Only rarely do they involve Haitians in determining priorities, planning or implementing. Foreigners decide what will be built or sold or given, and under what development model. And in many cases, the crisis provides fodder for private entities, like universities, to jump on a chance to engage academics in one country in designing essential elements of life for another, while working hand-in-hand with the private sector.

One of the first proposals passed by the Interim Commission was a $2.4 million effort to “Highlight Best Practices for Housing.” Public and private funding sources included the Clinton Foundation, Inter-American Development Bank, the telephone company Digicel, the large investment bank Deutsche Bank, and a Canadian NGO called OneX1.

The planners allocated the majority of the funding to the first of two project components, a housing exposition for participants to “test and demonstrate innovative housing ideas.” After delays, the expo transpired in June 2011, when Haitians had already spent a year and a half under tarps waiting for new homes or assistance in fixing their old homes or even better temporary shelter. Actual shelter for homeless people would have come many steps, and many months or years, down the line from the expo. In the end, it didn’t matter anyway, because no houses were built. As of this writing, the units that were built for the expo remain on the site, with no plan for their utilization.[i]

In fact, according to news reports and our interviews, there had been no plan for how designs would be chosen from the model homes and provided on a large scale (or on any scale) to destitute people. The default assumption was that families would purchase their own housing, most probably with subsidized bank loans. In the country with the lowest per capita income in the hemisphere, the homes were to sell for upward of $5,000, with many ranging higher than $10,000 and a few even more than $20,000.[ii] A 12-foot-by-12-foot blue plastic box, not unlike many of the shelters seen in some of the camps, sold for $7,500.[iii] One of the Clinton Foundation officials bluntly said, “This is a private sector exposition, you’re seeing people here who are hopeful to make some money.”[iv]

A government engineer estimated that fully half of the model homes at the expo were not resistant to earthquakes and hurricanes. One of the company reps said they do not need to be tested for resistance to strong winds.[v]

A second component of the “Highlight Best Practices for Housing” project was the creation of a model “exemplar” community with 125 units and a community center in Zoranje, on the outskirts of Port-au-Prince. Deutsche Bank, in addition to providing funding for the project, assisted in developing “new mortgage instruments” for future housing via “experts from the Bank’s residential mortgage backed securities group.” Essentially, Deutsche Bank has been developing strategies that make it easier for Haitian banks to offer loans to potential home-buyers. Even with low interest rates, requiring Haitian families to take out loans to purchase homes is predatory and, for most, would guarantee a life of debt. The prospect sounds eerily familiar to the predatory lending that took place in the US in the lead-up to the subprime mortgage crisis of the late 2000s, when low-income families were trapped by housing loans they could never pay back and were essentially set up for foreclosure – a phenomenon in which Deutsche Bank was a key player. In fact, the bank was popularly dubbed “America’s Foreclosure King,” given its position as a major financier of corporations such as Countrywide pushing high-risk mortgages. Deutsche Bank is currently being sued by the US Federal Housing Finance Agency for selling mis-valued mortgage-backed securities which helped precipitate the financial crisis in the US.[vi]

Deutsche Bank and the Clinton Foundation brought on board a joint team from Harvard University and MIT to help design housing strategy for the ‘exemplar’ project. John McAslan & Partners, a British architecture firm, was engaged to help design a “comprehensive community development strategy.”[vii] Yet there was no community; the Harvard-MIT design team was designing according to its own ideas, in a vacuum, from Cambridge, Massachusetts. As of October 2011, the team had spent exactly one afternoon meeting with existing residents in Zoranje. (Their project process document contained multiple photographs of this same meeting – Americans and Haitians sitting together in a circle – with speech bubbles extending from Haitians’ heads with tokenistic phrases such as “We need running water!” and “We need a church!”) According to an interview with a team member, one of the main insights they gained from this conversation was that job creation was a necessary addition to the community planning. One page in their planning document read, “If the new Zoranje community is not offered jobs or job training, crime and violence are pre-programmed,” followed by a photograph (with no source or caption) of black adolescent boys holding rifles.[viii] Viewers are not told whether the photo was taken in Zoranje, or even in Haiti. While members of the actual community had their ideas thus essentialized, the Haitians represented on the “Exemplar Community Foundation” include the former Tourism Secretary for Haiti and official at a major cruise line, a notorious landowner from one of Haiti’s most powerful families, and a former CEO of a large Haitian bank.

To add to the “community-in-a-box” type solutions, the design team came up with an idea called “community pairing,” by which neighborhoods in Port-au-Prince would be selected to move to designated locations outside the city. The idea came not from local residents, our interview revealed, but from research being done at the design team’s respective American institutions on urban redevelopment and slum upgrading. (Furthermore, the “silver bullet” solution of moving neighborhoods out to the provinces fails to recognize the larger economic forces at play, including the role of US foreign policy in harming Haitian agriculture, which has driven thousands of Haitian peasants to seek a better life in Port-au-Prince.) The same design team intended to provide recommendations to the government on how its strategies can be incorporated into national housing policies. Collaboration with the Haitian housing rights movement did not feature in this process.

The joint contract embodied a core problem of the foreign business-led redevelopment model: the targets of the projects were objects, not subjects, in planning and design. In this case, the proposal did not elaborate plans for how the Haitians who were to live in the “model community” would determine what kind of houses they wanted, or what kind of community center would serve their families, or what their vision of community development was. An added problem is the inherent lack of accountability in giving power to outside companies and institutions with no history in Haiti, no understanding of the country, and no commitment to Haitians. Designing a product for people without any consultation with them is unethical, especially when the product involves dangerously subpar safety standards, inaccessible pricing, and cultural ignorance. And foreign groups have gone about their work with blinders to the energetic Haitian movement that does exist, that is struggling to promote its recommendations on topics ranging from eminent domain to housing structures to evictions.

With the 60-some model units still remaining, uninhabited, at the site of the housing expo, “Highlight best practices for housing” has done anything but that.