The UN in Haiti: First, Do No Harm (By The Economist)

Foreign peacekeepers have worn out their welcome. How can they be held accountable for their actions? 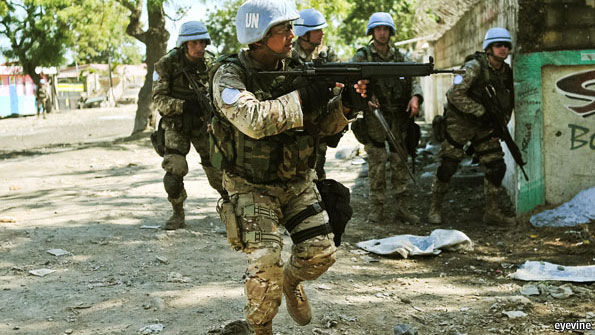 HAITIANS have good reason to be suspicious of foreigners claiming to act in their interests. In the 19th century France, the former imperial power, kindly offered to have Parisian banks finance the reparations it demanded in exchange for recognising the country’s independence. The resulting debt drained Haiti’s treasury for decades. A century later the United States generously built up the country’s infrastructure—using virtual slave labour during a brutal military occupation.

Today’s foreign do-gooders in Haiti are the 9,000 members of Minustah, the UN’s peacekeeping force. They are surely better-meaning than the interlopers of the past. But the Haitian government has little more influence over them than it did over America’s marines. And in recent years the force has inflicted great damage. Its troops have been blamed for starting a cholera epidemic that has claimed 7,000 lives, and have been accused in numerous cases of rape and sexual assault. Its missteps are leading to ever more strident calls for greater accountability for peacekeepers.

The latest public-relations volley was launched on April 21st at the Tribeca Film Festival in New York. “Baseball in the Time of Cholera”, directed by two foreign-aid workers living in Haiti, weaves together the stories of a teenage athlete who loses his mother to cholera and lawyers suing the UN for negligent sanitation at a Nepali peacekeeping base . The film features plenty of news footage of the base, including sewage pipes flowing into a tributary of Haiti’s largest river. The first cholera cases appeared near the base, and the bacteria—a South Asian strain—quickly spread along the river and its network of canals, which Haitians use for bathing, drinking, irrigating crops and washing clothes.

Since the outbreak began the UN has tried to dodge accusations of responsibility, saying that the source of the disease is unknowable or unimportant. But a series of epidemiological and genome studies have all but established Minustah’s role as fact. Even Bill Clinton, the UN’s own special envoy for Haiti, has acknowledged it. “It was the proximate cause of cholera,” he said last month. “That is, [a Minustah soldier] was carrying the cholera strain. It came from his waste stream into the waterways of Haiti, into the bodies of Haitians.”

Citing scientific evidence, in November the lawyers featured in the film filed 5,000 complaints to Minustah’s claims office on behalf of cholera victims, seeking at least $250m in damages. The UN’s peacekeeping department says it is studying them. Until now, the claims office has dealt with smaller matters, such as property damage.

Minustah’s agreement with the government states that bigger disputes should be handled by a special tribunal. So far, however, none has been set up. Since the force and its troops enjoy immunity from local courts—which most countries demand before offering soldiers to the UN—cholera victims have no other formal legal recourse. As a result, their lawyers are threatening to challenge Minustah’s immunity in the Haitian courts if the UN does not address their claims. That could affect peacekeeping operations worldwide.

Minustah’s reputation has been further tarnished by charges of sexual abuse. Two Pakistani soldiers were accused of raping a 14-year-old boy, and a group of Uruguayan peacekeepers allegedly sexually assaulted an 18-year-old boy and videoed the incident. The justice system has worked somewhat better in these cases—a Pakistani military tribunal convened in Haiti convicted its soldiers last month, and the Uruguayans seem likely to face trial in their home country. But the Pakistanis were sentenced to just one year in prison. A popular song at this year’s Haitian Carnival included a line cautioning young men nearby the peacekeepers to watch their rears.

Even as Haitians have been outraged by Minustah’s wrongdoing, they have become increasingly doubtful of the benefits it provides. The UN originally deployed the force in 2004 to stabilise the country during the civil unrest that followed the ejection of Jean-Bertrand Aristide, a populist former priest, from the presidency. There has been no serious armed conflict in Haiti since 2006—which can be taken as evidence either of Minustah’s effectiveness or of its irrelevance. Even if the troops do contribute to security, critics of the force note that a single year of its $800m budget might be enough to revamp the country’s decrepit water infrastructure. That might well have prevented cholera from spreading in the first place.

Minustah’s footprint in Haiti is getting somewhat lighter. Assuming that 1,600 troops leave by June as scheduled, the force will be cut to 7,400, roughly the same number as before Haiti’s earthquake in January 2010. But further reductions are unlikely in view of the political tumult during the first year of the presidency of Michel Martelly, a former musician. In February his prime minister, Gary Conille, offered to resign after just four months in office, which he spent mainly investigating corruption. Mr Martelly can do little until a successor is confirmed. On April 17th, 50 members of a rogue paramilitary force, claiming to represent a volunteer militia that has occupied an abandoned army barracks, disrupted parliament and forced it out of session. The president himself was abroad, recovering from an embolism. The government is in no position to dictate terms. Only the UN can restore Minustah’s legitimacy.