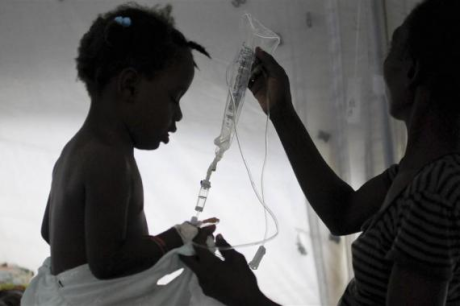 A child receiving treatment for cholera is seen at a centre run by Medecins Sans Frontieres in Haiti’s capital Port-au-Prince November 27, 2011. REUTERS/Swoan Parker

An American filmmaker is hoping to use the power of viral video to raise awareness about Haiti’s cholera epidemic in much the same way the surprise Internet sensation Kony 2012 got the world talking about the plight of child soldiers under Ugandan warlord Joseph Kony.

If David Darg’s award-winning documentary, “Baseball in the time of Cholera”, gets even a fraction of the 100 million hits the Kony video received, there could soon be a lot more people demanding action on Haiti’s epidemic.

Darg’s hard-hitting film aims to heap public pressure on the United Nations to take responsibility for the outbreak which began in October 2010 and continues today.

It says Nepalese troops from the U.N. peacekeeping mission in Haiti brought the disease to the Caribbean nation.

The epidemic has claimed more than 7,200 lives and infected over half a million Haitians – some five percent of the pop­u­la­tion – accord­ing to figures from the Haitian government.

Several scientific studies, including a June 2011 report by the U.S. Centers for Disease Control and Prevention, say U.N. troops were the likely cause of the outbreak.

Darg tells me he hopes the documentary, co-directed by Bryn Mooser, will be a viral success like Kony 2012.

The Kony campaign, which called for the capture of the fugitive leader of the Ugandan Lord’s Resistance Army, attracted massive support on Twitter and Facebook as well as celebrity backing after going viral in March.

Darg’s aim is to generate enough public pressure against the United Nations for it to accept responsibility for the cholera epidemic and provide clean water and sanitation for Haitians.

“It’s a violation of the U.N.’s policy on the environment and human rights. They are completely at fault. They’ve basically brushed the cholera outbreak aside and blamed it on the Haitians,” says the filmmaker and aid worker.

Last May, a U.N. led commission concluded that while the cholera bacteria did not originate “from the native environs of Haiti”, the outbreak was “not the fault of, or delib­er­ate action of, a group or indi­vid­ual”.

Darg arrived in Haiti immediately after the January 2010 earthquake to help in the relief effort following the disaster.

While in Haiti, he came across the country’s only junior league baseball team, set up by 16-year-old Joseph Alvyns.

Darg started filming Alvyns and his group of friends as they found joy and solace on the baseball pitch.

But filming took an abrupt turn when Alvyn’s mother suddenly died from cholera, exactly a year after the outbreak erupted.

“It was after her death that I took a step back and realised what a scandal it all was.  It was then the urgency kicked in to raise awareness about cholera and who was at fault in the documentary,” Darg says.

In perhaps one of the documentary’s most poignant scenes, Alvyns stands in a desolate cemetery next to the grave of his mother holding a single red carnation.

“She worked very hard for us. She loved us very much. She will stay in my heart forever,” the teenage boy says as silent tears roll down his cheeks.

Darg isn’t the only ones shining a spotlight on the United Nations’ role.

Last November, a Boston-based rights group, the Institute for Justice and Democracy in Haiti, filed claims against the United Nations on behalf of 5,000 cholera victims, demanding hundreds of millions of dollars in compensation and a public apology.

“There’s been no news at all about the legal case and no review. Lawyers are considering going through a national court in the U.S.,” Darg says.

The rights group says the United Nations failed to screen its peacekeepers for cholera and allowed untreated waste from a U.N. base in Haiti to be dumped into the country’s main river, contaminating it with the water-borne disease.

“Ninety eight percent of people you ask in Haiti think the United Nations is to blame for the cholera outbreak,” he adds.

Members of U.S congress are also putting pressure on the United Nations.

In May, over 75 members signed a letter urging the U.S. government to call on the United Nations to take measures to address the epidemic by improving access to clean water and sanitation, a task estimated to cost up to $1.1 billion.

Meanwhile, Alvyns and thousands of other Haitians wait for some kind of justice and pray that the cholera doesn’t resurge as the hurricane season gets under way.