Too Soon For Carnival: Sweeping Haiti’s 400,000 Poor Back Under the Rug

For those who haven’t been to Haiti for a while, or for those who have never been but have seen the hell on earth portrayed in the media, the fact that Champs-de-Mars and other plazas in Port-au-Prince are no longer home to thousands of people is a symbol of progress.

Celebrating this “liberation” of public spaces, President Martelly is planning a Carnival des Fleurs, a tradition under Duvalier, scheduled to begin July 29, a day after the anniversary of the 1915 U.S. invasion.

For the 390,276 people the International Organization for Migration (IOM) estimates who are still under ripped sheets of plastic or tarp, it’s too soon to celebrate.

Many believe this relocation of camps on highly-visible areas is akin to sweeping the garbage off the floor only to have it out of sight and out of mind, in someone else’s backyard. Where are people going?

For its part, the IOM is keeping track of people they have relocated in the 16/6 program. But the 16/6 camps only account for 5 percent of the total camp population.

And for the others? “Nou pa konnen.” We don’t know.

We do know that places like Mòn Lopital are sites for thousands of new residents inching ever farther up the mountainside, in crowded shantytowns. Kanaran, a long stretch of desert land in the outskirts of town, is still growing — no one knows how many people live there. I’ve heard estimates of 130,000 to 180,000 people but IOM has never done a census.

Like piles of garbage swept aside and neglected, away from the main plazas and busy thoroughfares are camps that are real, all too real. And they are not going away any time soon.

Among the eight camps in my study last summer, for example, HANCHO, Karade, and Kolonbi are already well on their way to becoming shantytowns, the Cité Soleils (which recently was upgraded to a “yellow zone“) of the next generation. Some residents are beginning to erect walls or concrete foundations for their homes, some now made of scrap metal instead of tarp. A common denominator is that they are all hidden, on land that is relatively secure – many owned by former military members long in exile — and of no strategic interest to investors or tourism promoters.

Unfortunately they also have in common an even increasing deterioration of the ripped sheets of plastic that are people’s homes and primary services such as water. In Kolonbi, the IOM finally took out the latrines that hadn’t been cleaned for months in February (they later opened a cholera treatment center). But new people — arriving as the 16/6 program began — pitched their tent right on top of the former site that still exudes a strong smell. The Red Cross’s work to reinforce the walls on the ravine, where people now throw their excrement, has been stopped for several months. 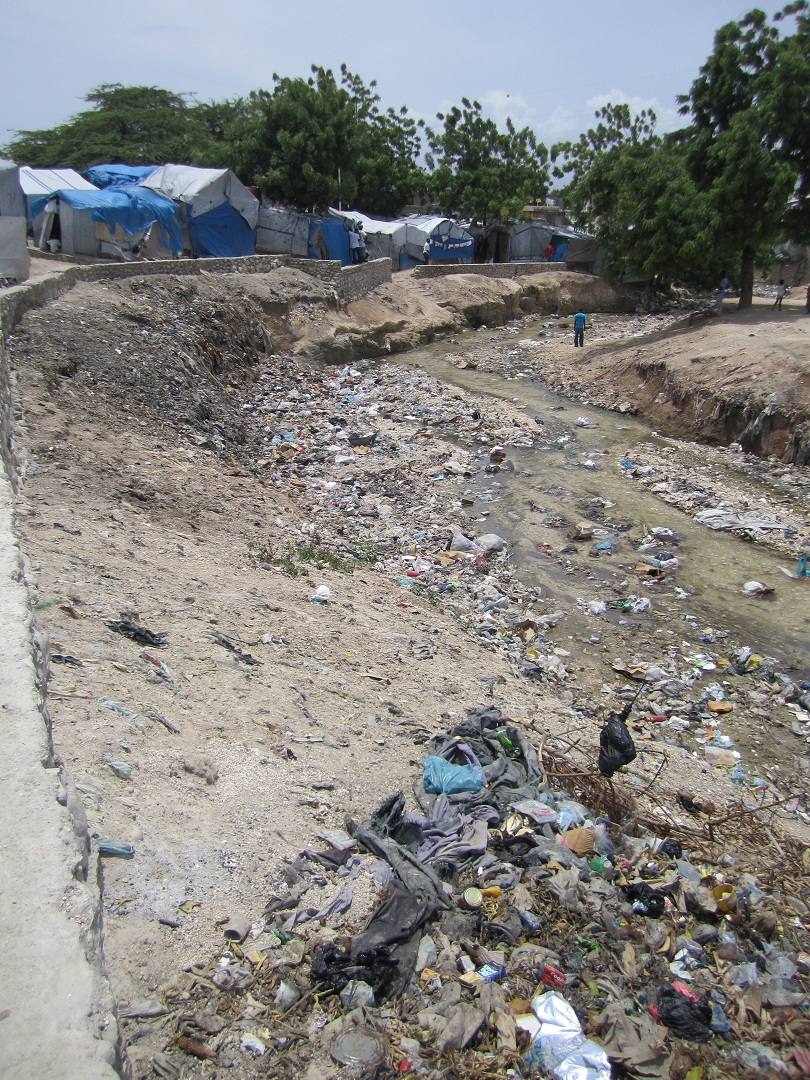 Toilets have also been removed in HANCHO, as well as a few residents, including the only family who sold hot meals. A walk through the windy, dusty camp reveals most tents — in much worse condition than before — occupied, with people singing, listening to the radio, washing clothes, cooking, or reading. A former army officer is reclaiming part of the space to build a factory; 15 families are at imminent risk of forced relocation since last Tuesday. With no relocation assistance or mediation from the IOM, they wait daily for the order to move, hoping it won’t come in the middle of the night and accompanied by arson or machetes like other recent cases. Some may pitch their tent somewhere else in the camp, clearing the weeds where goats graze. 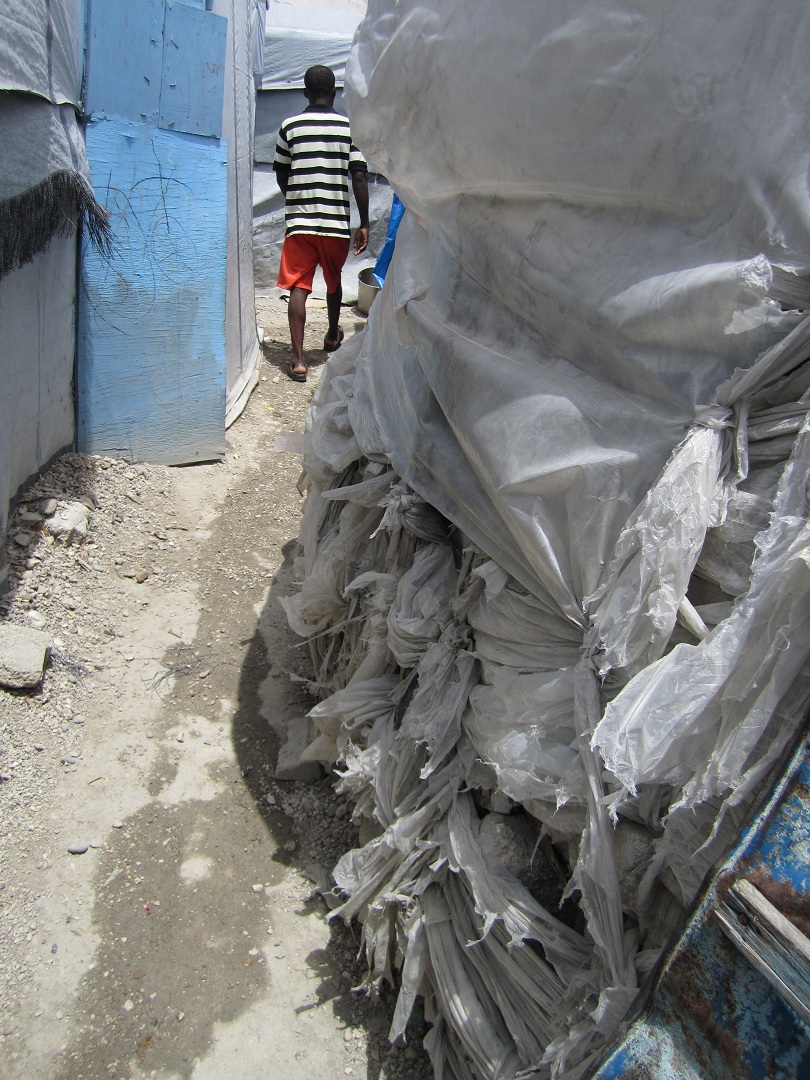 In Karade, trees planted since the earthquake are now higher than many tents, offering some shade. And Frisline, whom I’ve known since 2003, proudly shared a banana from her yard. But there is still no clinic and it is still a 20 minute walk to get the water stationed outside the camp and outside the Delmas city limits, in front of the t-shelters installed by CRS for those displaced from St. Louis.

Frisline, who has had to twice buy new tarps, either suffocates in the heat trapped inside the fraying tarps or opens a flap, inviting dust to blow inside the tent. Karade is on a hill where the wind almost constantly kicks up dust. Since no one has invested in roads, rains mean a treacherous trek back home or even a mudslide. More than a dozen tents have been moved because the rains have eroded the ground by the ravine. 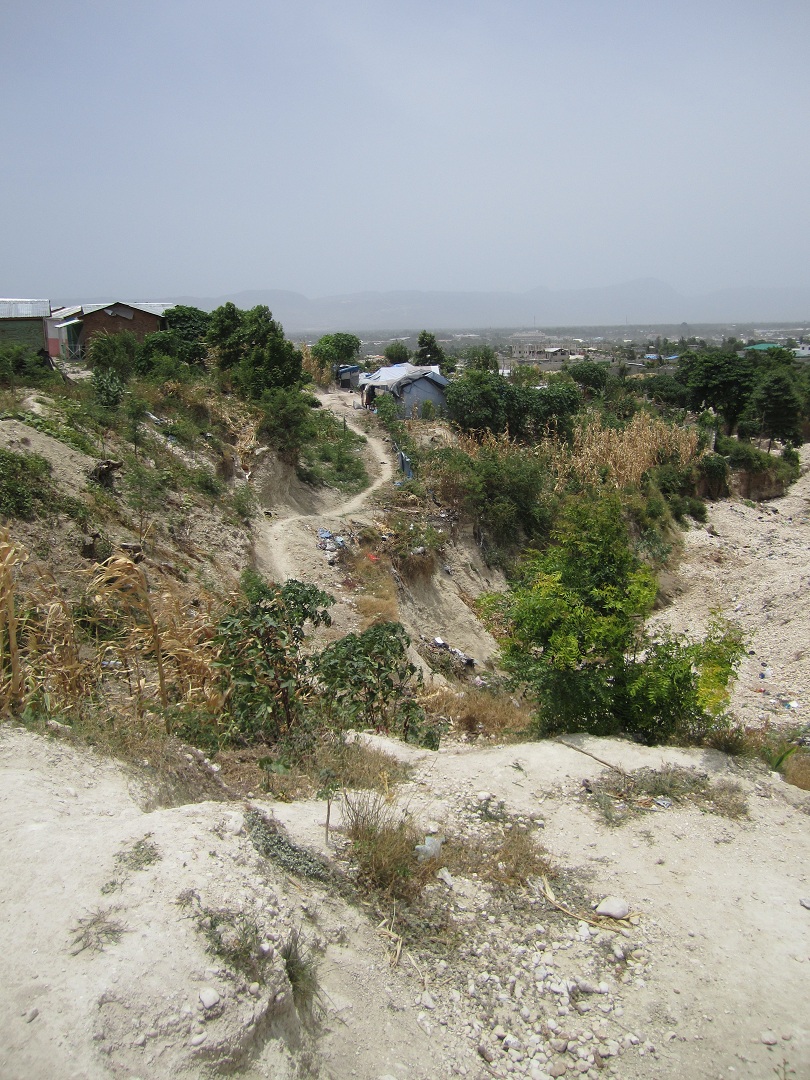 Kolonbi, HANCHO, and Karade are by no means unique. Large camps are still tucked away among Port-au-Prince’s teeming shantytowns, hillsides or valleys, like Acra (there are four camps bearing the name of this wealthy family), KID, Bourdon, Solino, Mòn Silo, Cineas…

Given the more complex realities, not to mention living under sheets of plastic ripped by another rainy season on top of the hottest summer in recent memory, it’s too soon to celebrate. Where are people going? And are they living better than before? And what about those who remain?

Individual solutions may work well for those who made it on the list, but for the rest, only a collective social policy will be able to do more than sweep the problem onto someone else’s doorstep. On Monday, an international campaign was launched to ask the Haitian government and donors to build quality social housing and stop forced eviction until said housing is built.