Nicole Phillips, attorney at the NGO Institute for Justice & Democracy in Haiti, has suffered through many a sleepless night thinking of ways to Grassroots women’s group in Haiti gather to voice their concerns to  visually represent the negative impact the ongoing housing crisis in Haiti has on Internally Displaced Persons (IDP). 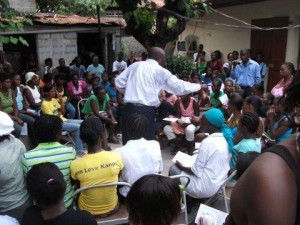 As the clock continues to tick the International Organization for Migration (IOM) reveals that there are still 390,276 displaced individuals and 575 camps left standing two years after the 7.0 magnitude earthquake shook the country into a state of crisis. Despite this overwhelming number, the situation improved since 2010, when over 1.5 million people were displaced.

“It is important for all commentators to understand that housing is a process and understand the contributing factors, rather than see housing as numbers and products,” Maggie Stephenson from UN-HABITAT warns.

For this reason, Phillips and the IJDH are not hung up on whether housing statistics have improved in the country. Rather, the organization monitors if the solutions being implemented by the government are in line with the needs of those affected by the crisis. In a survey conducted by Phillips and her team, 41 percent of Haitian families reported living in worse conditions than before the earthquake.

The research functioned as a follow-up to a previous survey Phillips conducted a year ago, when the Haitian government first launched the “16/6” housing program that had promised to bring an end to the crisis. Of the 75 surveyors that Phillips managed to track down from the original survey, 11 percent have already been asked to leave the home they relocated to under “16/6.”

The “16/6” housing program sought to prioritize the closing of six camps chosen by the government, while simultaneously reconstructing 16 “quartiers,” or neighborhoods, for IDPs (Internally Displaced Persons) to move back into.

According to Alejandro Pacheco, UNDP’s “16/6” project manager, the six camps that prioritized for removal “were to be the most important camps in symbolic terms. They were, for instance, big public squares that had a symbolic meaning,” Pacheco says.

Phillips, however, believes that the government had another agenda: to hide the overwhelming amount of IDPs that are still out there from the public eye. “I think what the government did is very strategically choose which camps it wanted to close,” Phillips explains. “Two of the camps were in rich areas where there are a lot of hotels and where a lot of journalists stay, where international community members stay.” 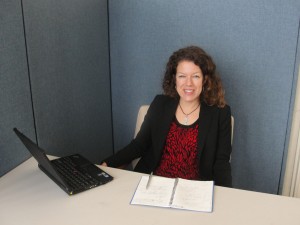 Indeed, one of the six camps that was shut down was located near the airport so that visitors flying into Port-au-Prince will no longer be immediately exposed to the thousands of displaced families that are still languishing in temporary housing.
“10 to 20 percent of the population of Port-au-Prince is still in IDP camps, but they’re in places where we can’t find them, where we don’t see them,” Phillips points out.

Pacheco insists that there was another strategic reason for choosing to shut down the six camps that they did. “The original idea was to give them a chance to go back to their neighborhood of origin,” Pacheco tells MediaGlobal. “We knew that 80 percent of the people from these six camps came from 16 neighborhoods.”

Pacheco goes on to explain that under the “16/6” plan displaced people have the power to decide their own fate because they are given three options of relocation to choose from.

The first two choices entail receiving funds from the government to repair a “yellow house,” a damaged house whose basic foundation is still standing, or a “red house,” a house that is in a more critical state. The third option offers IDPs $500 for rental support, plus $25 for transportation, and an additional $125 for several weeks after occupants move in.

Stephenson tells MediaGlobal that “the majority of people in camps are renters and have expressed a preference to return to being renters.” As a result, 97 percent of IDPs choose the third option.

Many human rights groups like IDJH, however, fear that giving displaced people temporary rent money is not a long-term solution. “Paying $500 when people don’t have jobs is not going to be a sustainable solution,” Philips says. According to her, Haiti’s government is failing to deliver on needs expressed by displaced people. “There is one thing that uniformly people affected by the earthquake want…they want social housing to be built.”

Social housing is a program sponsored by the government that guarantees a permanent affordable house to those who most need them. According to Phillips and the IJDH, one of the main reasons this demand isn’t being met is the lack of communication between the groups that drafted the “16/6” and the people being directly affected by the program.

“We met with over a dozen women’s groups, grassroots groups… Not a single group had ever been consulted by anybody that was putting together a housing project,” says Phillips, who insists that partnering up with local groups is an easier task than meets the eye and will only strengthen the work the government is already doing in the country.

“Sometimes we asked the day-of, ‘can we have a meeting with you?’ and I would have 50 women in our office who have no money to get there,” Phillips says. She urges government agencies to be inspired by the IDP’s willingness to play an active role in solving the housing crisis. “If you spend five minutes in Haiti with one of my clients you will realize: ‘How could I not do this work?’ They’re fighting. How can we not?”