Haitians in Miami urge Obama to let family come to U.S.on parole visa program-With the president in town, Haitian advocates took the opportunity to speak up on an immigration issue that has preoccupied the group since the earthquake ravaged the country in 2010. 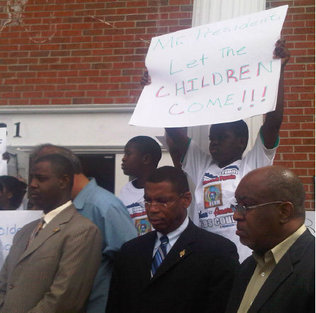 Haitian advocates in Miami made an emotional appeal to President Barack Obama on Tuesday, hours before he came to town for a campaign event.

At the center for Haitian Women of Miami, leaders urged Obama to allow family members to come to the United States for a better life.

A group of religious, political and business leaders pressed the issue at the FANM Center, 181 NE 82nd St., an issue they say has been put on the back burner since an earthquake ravaged Haiti more than two years ago.

At the time, Obama pledged to help Haitians get back on their feet. Miami leaders say the answer is opening the doors to people who continue to live in disaster areas who want to reunite with relatives in the U.S.

The Haitian Family Reunification Parole Program, if signed by Obama, would allow 112,000 visa petitioners to be in the U.S. as they wait for a family-based visa. A similar program was approved twice by Obama in the past two years for Cuban immigrants who needed to be with their families in the U.S.

Members of both parties in Congress have expressed their support, but it’s up to the president to sign off on approval.

White House hesitation has been criticized by city leaders around the nation. Grass-roots organizations like FANM also are focusing on the issue. On Tuesday at the organization, children held signs that read “President Obama: Let the children come” and “Haitians deserve equal treatment.”

Bastien worked with local and national efforts to provide aid after the earthquake, and she was in charge of the Miami warehouse where food was stored before being sent to the destitute nation.

“It’s been proven that the best way to help Haiti recover after an earthquake that killed 250,00 people is to facilitate legal migration,” Bastien said. “And it’s the best way to keep people from taking to the sea in rickety boats and risking their lives.”

Two weeks ago, 13 Haitians, including seven children, died at sea on the coast of Abaco as they fled Haiti.

Marie Rose Pierre is a mother of six who fears for her family’s lives. They live in Port-au-Prince, and every day, she thinks they might not be alive the next time she tries calling. She spoke Tuesday through tears, in Creole, as Bastien translated to English. “Help me get my family here,” Pierre said, ending with the only word she said in English: “Please.”