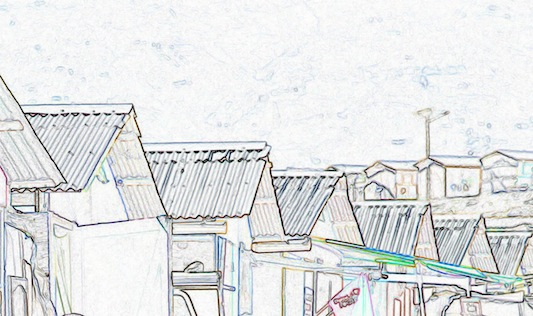 Since January 2011 —a year after Port-au-Prince and its environs were pummeled by a devastating earthquake — the United States has deported hundreds of Haitian nationals, many of whom had long been legal permanent residents of the US, despite the ongoing humanitarian crisis in Haiti and the impact the deportations have on children and spouses, many of them US citizens, who are left behind.

As part of this advocacy, the University of Miami School of Law’s Human Rights and Immigration Clinics, along with several partner organizations — Americans for Immigrant Justice, Alternative Chance, the Center for Constitutional Rights, and Loyola Law Clinic and Center for Social Justice — filed a petition against the US with the Inter-American Commission on Human Rights.

We argued that forcibly sending individuals to Haiti — where there are withering shortages of food, potable water, housing, and medicine and medical care, as well as inadequate security and police forces — violates their human rights, which are protected by the American Declaration of the Rights and Duties of Man, adopted in 1948.

We urged the Inter-American Commission to issue precautionary measures — similar to an injunction — against the US to stop the deportations. The Commission agreed, calling upon the US “to suspend deportations to Haiti of persons of Haitian origin who are seriously ill or who have family members in the United States,” and the US responded by reviewing some deportations. But Haitians and people of Haitian origin continue to be deported, in violation of American human-rights obligations.

The Life of a Deportee in Haiti

Many deportees sent to Haiti are legal permanent residents of the US who have been in the United States for long periods of time and have US-citizen spouses and children who are financially dependent on them. Many have no family in Haiti, and some, born in the Bahamas or other countries, have never even lived there. They are being sent to Haiti because they have criminal records — many for minor infractions — even though they have already served their time in the US.

Last February 2012, I had the opportunity to travel to Port-au-Prince to conduct human rights documentation on the ground. There were four of us on the trip: Professor Carrie Bettinger-López, director of the University of Miami School of Law’s Human Rights Clinic; Marleine Bastien, Director of Haitian Women of Miami; and Erin Lewis and I, who were law students and members of the Human Rights Clinic at the time. Our task was to document two crucial aspects of conditions on the ground in Haiti — the impoverished country’s humanitarian crisis and the experiences of those forced to return to Haiti by immigration and judicial officials in the United States and other countries.

While living conditions in Haiti — widely regarded as the poorest country in the Western hemisphere — are deplorable for many of its citizens, US deportees arriving in the Caribbean nation are routinely detained, unjustifiably and without due process, in filthy detention centers. Cells are awash in human excrement, blood and vomit, and have few or no working toilets. Deportees are typically not provided food or water, let alone medical or mental health care. Cholera and other diseases are rampant in the tightly-packed detention centers.

Our worst fears became reality last year, when one US deportee, Wildrick Guerrier, 34, died of cholera-like symptoms in February 2011 after being detained in Haiti upon arrival.

During our trip to Haiti, we interviewed more than 20 people who had been deported from the United States, Canada and the Dominican Republic. The deportees’ stories painted pictures of fear and helplessness. They suffer from discrimination and are routinely stigmatized, with many serving as scapegoats for neighborhood crimes. They say they are often targeted for extortion because people mistakenly perceive them to be rich outsiders. Additionally, many cannot get jobs or benefit from public services since they are generally not issued Haitian identity cards, making it difficult or impossible for them to get food, water, medical care and housing.

Many deportees who have lived most of their lives in the country that deported them do not speak Haitian Creole, and have little or no family support system in Haiti. For some, born in other countries, it is their first time in Haiti.

Many deportees told us they had been forced to leave stable jobs in the United States, where they were the primary breadwinners for their families. Without their financial support, they said, their US-citizen children and spouses have been left to struggle, unable to buy food and pay utility bills and other expenses. Some deportees may never see their loved ones again. Deportations not only threaten the lives of the deportees but, for many, their reason for living, as they are often permanently separated from their families and loved ones.

“I don’t think I’m going to make it,” was a common refrain, their hopeless outlook reflected in their eyes. One Bahamian-born man sang a mournful, poetic song he had written about being cast off to a country to which he had never been.

Our interviews in Haiti and with family members in the US revealed that many people are being deported to Haiti despite severe medical conditions and strong family ties to the United States. My colleague Erin Lewis talked to one young man who had a bleeding ulcer. She spoke to another who was disabled from a hit-and-run accident several years ago in Miami. He showed her a long scar running from his ankle to his thigh. I talked to a man who had an open head wound the size of a golf ball. None of these men had access to medication or treatment.

Screams in Pitch-Black Cells, and the Perils of Tent Camps

Marleine Bastien and I visited a detention center, the Direction Centrale de la Police Judiciaire, where many US deportees are held after arrival in Haiti. While we were allowed only very limited access, we got a glimpse of the deplorable conditions there. It was night, and the only light in the large cellblock came from one of the cells, separated from the rest. We were taken to that cell and it became obvious that it was a “model” room, most likely lighted for the benefit of visitors. The cell housed two women who had food and water.

Jail officials suggested that the cell was just like the others in the detention center, and yet we heard much screaming and shouting, in various languages, from a long hallway of pitch-black cells. I moved closer to the hallway and was overcome by a powerful stench of urine and vomit. I wanted to see — but was afraid to see — what was happening in the cells just a few feet away, in which detainees cast away by the United States and other countries had been taken in chains and locked up like discarded animals.

The close quarters and filthy conditions of Haitian detention centers, and the lack of toilets and proper sanitation, create breeding grounds for diseases such as cholera that threaten lives and sometimes consume them — Wildrick Guerrier’s being just one example. I imagined being detained in such terrifying conditions, without judicial process or any of the norms we take for granted in the US.

I was grateful that I could walk out of the detention center freely, but I felt renewed frustration that the United States and other nations continue to dispatch human beings to wallow in such conditions.

Because of the catastrophic earthquake and the lack of a coherent reconstruction plan, more than 500,000 people remain in makeshift tent camps, and tens of thousands more are displaced and homeless, living on the periphery of the tent camps in Port-au-Prince and other Haitian cities. We visited two tent camps in the capital to see for ourselves the conditions in which the people there — many of them deportees — live. Beyond the wrenching poverty and disease, the tent camps present severe safety concerns, especially for women and girls who become victims of rape.

The first camp we entered, Camp Mozayik — known in Creole as Kan Mozayik — was under threat of immediate and complete eviction by the local mayor. The conditions were devastating. As we walked through the camp, we were invited into a tent in which 25 people lived. We were asked into another where several people lay motionless, apparently very sick. Erin and I hesitated to take photos but the camp leader insisted, saying that the outside world should see the conditions. The people who were sick had no access to medicine or medical care, we were told. It was as though they were waiting for either a miracle or the end.

Even though it was the middle of a school day, children were running around in the camp. We were told that their parents could not afford to send them to school. We also learned that because of the lack of security in the camps, there were “babies having babies,” the result of girls being raped because there was no security to prevent such crimes. Many deportees have no choice but to live in the tent camps — they have nowhere else to go.

The School of Law’s Human Rights and Immigration Clinics are using the information gathered during the trip to bolster our continuing efforts to halt all deportations to Haiti. In March 2012, we went to Washington, DC to meet with officials from the Inter-American Commission on Human Rights, the Department of State and the Department of Homeland Security. We also met with representatives of the United Nations High Commissioner for Refugees, shared with them some of the information we had gathered, and asked them to continue calling for a halt to deportations to Haiti.

We also worked with the UN’s Independent Expert on Haiti, Michel Forst, on his report about the problems inherent in deporting people to Haiti. When released in June, the report said that UN member countries are still forcibly returning Haitians to the island nation, placing them “in a vulnerable, life-threatening position.” Forst wrote that he is deeply concerned that deportations to Haiti violate the deportees’ human rights.

Our trip to Haiti personalized the advocacy of the Human Rights and Immigration Clinics, allowing us to encounter people who have been left with nothing and who, in some cases, are still somehow making it. To us, they demonstrated the power of their spirit, the importance of international law, and how much more human rights work there is to do in Haiti, the US and around the globe.