Throwing Activists Into Crowded Jails: How Haiti’s Government is Silencing the Opposition 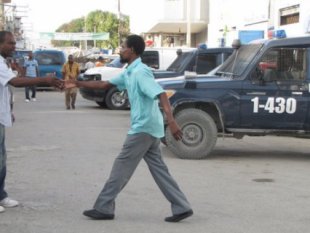 Two weeks ago, a weary looking yet jubilant David Oxygène stepped out of the prison building into a throng of supporters. The Haitian political activist was released after over two months in prison since he was arrested on June 19, 2012, during one of his group’s weekly Port-au-Prince demonstrations in front of the Ministry of Social Affairs, calling on the Martelly government for work and better social policies for Haiti’s poor.

Oxygène, a leader of the grassroots organization MOLEGHAF (Movement for Liberty and Equality by Haitians for Fraternity), was ordered released by a Haitian judge after his attorney, Mario Joseph of the Bureau des Avocats Internationaux, argued that the arrest was unfounded (“Echoes of Duvalier in Martelly’s Haiti,” Common Dreams, July 23, 2012). Oxygène was charged with vandalism of a white Nissan SUV belonging to the executive of Haiti’s telecommunications bureau, CONATEL.  However, while the charges indicated Oxygene smashed a window of the car with a rock during the protest, Oxygene maintained that he never saw the car described in the complaint.  The police simply arrived and singled him out without reason.  Fellow activist Duckens Charles, in an act of brave solidarity, then had himself arrested to go to prison with Oxygene.

Over the course of Joseph’s representation of Oxygène and Charles, it became evident that there was no evidence to support the charges against Oxygène.  The BAI thus filed a request for a main levee d’écrou, an order that allows the judge to release prisoners whose detention cannot be substantiated.  The order was issued by the investigating judge and signed off by the deputy prosecutor on August 23, 2012, but it remained on the desk of the Chief Prosecutor for a full week, awaiting his personal approval of the release (an anomaly, since an order signed by the investigating judge and deputy prosecutor is usually enough to authorize release of the prisoner).  Oxygène and Charles were finally released on the evening of August 30, 2012.

In an interview after his release, Oxygène said that he had received a warning before his arrest from a Martelly supporter who urged Oxygène to be prudent because he would be imprisoned if he did not stop protesting against the Martelly government’s policies. Oxygène mentioned that while in prison, he was offered his release if he accepted a position in the Martelly government.

“I could never take such a compromise, and so I was prepared to remain in prison,” Oxygène says.  “I knew that if the BAI’s judicial route did not bear fruits, I could be there for a long, long time.”

The arrest was not the first indication that Haiti’s president is intent on silencing opposition. Martelly has embraced the return to Haiti of former dictator Jean-Claude Duvalier, and urged that Duvalier be given amnesty for actions of political repression including arresting, torturing, and killing political opponents in a notorious three-prison “Triangle of Death.”  Martelly has also threatened journalists who were critical of his government and members of Martelly’s staff roughed up some journalists and destroyed some of their equipment. Martelly has still not scheduled overdue elections to replace Haitian senators whose terms have expired.

For his part, Oxygène says he and MOLEGHAF have no intention of muting their call to action to address the grinding poverty in Haiti. “We demand social services like work and decent housing,” Oxygène says. “We’re not asking for a couple little jobs here and there – we’re asking for a fundamental change that allows the poorest folks to have a decent life, to make a decent living.

“Martelly promised that he was going to make change but nothing has changed, and people see that. People’s bad situations have gotten worse,” Oxygène says. “There is growing discontent in the quartiers populaires, or poor neighborhoods, where young men don’t have work and families go hungry.”

During his two-month stay in prison, Oxygène was held in a section of the National Penitentiary called “Titanic,” a cell made for 34 people but held as many as 100 prisoners. They receive a small quantity of untreated water daily, which is for brushing one’s teeth, bathing and even drinking.  Prisoners often suffer from digestive diseases and skin problems as a result.  The Inter-American Court of Human Rights declared Haiti’s miserable conditions for pre-trial detainees and ongoing human rights violation in its 2008 ruling in the Yvon Neptune case.

“The conditions are really harsh. People fight everyday – there are at least 10-15 fights a day,” Oxygène says.  “Men stab one another, smoke, take drugs, and become frustrated because of the conditions of the prison.  Their frustrations make them cruel and they lash out against others.”

The arrest and imprisonment have only reaffirmed his commitment to activism, though Oxygène knows he is likely to be arrested again.  “These kinds of things can either break you and make you turn away from the struggle, or they can fortify you to battle harder for change. For me, it made me stronger to continue the struggle and never give up until I see change or until they kill me.

“Ann nou batay pou viktwa final, pou chanjman mond la,” he says. Let’s fight for the final victory, for the world to change. “First, in the place where you live, and second, in all other places where there is injustice.”