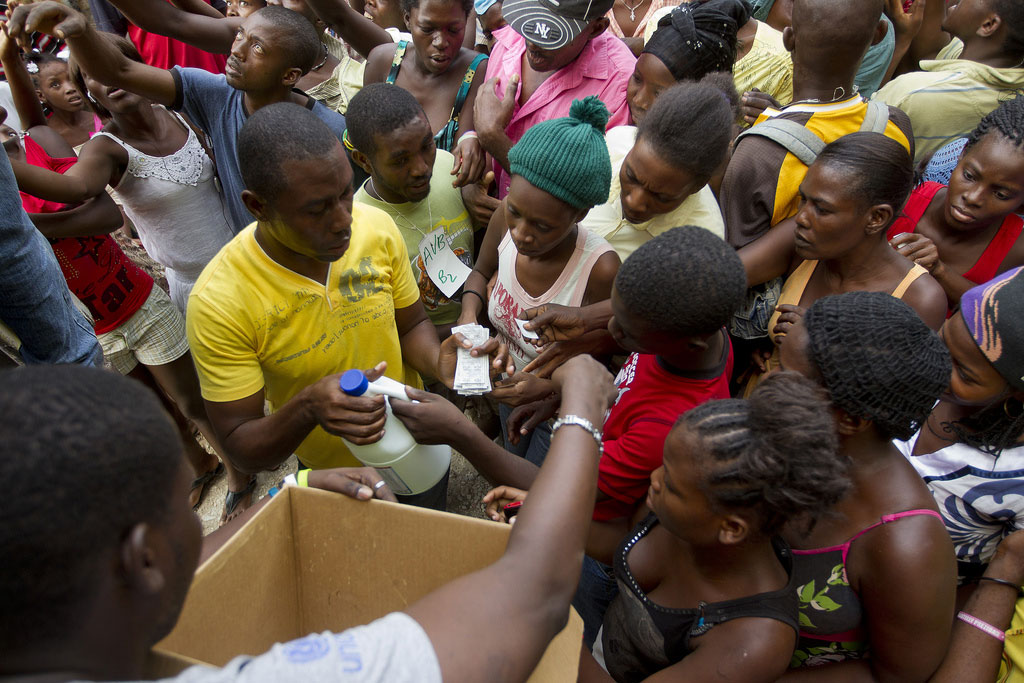 At a camp for displaced persons in Port au Prince, Haiti, residents get bleach and water purification tablets which are used in cholera prevention. Photo: UN/MINUSTAH/Logan Abassi

11 December 2012 – The United Nations today announced a new initiative to help eliminate cholera in Haiti and the Dominican Republic, the two nations that make up the Caribbean island of Hispaniola.

“The new initiative will invest in prevention, treatment, and education – it will take a holistic approach to tackling the cholera challenge,” said Secretary-General Ban Ki-moon at the initiative’s launch. “The main focus is on the extension of clean drinking water and sanitation systems – but we are also determined to save lives now through the use of an oral cholera vaccine.”

“Because global vaccines are in short supply, we will first target high-risk areas: densely populated urban areas and rural areas far removed from health services,” he added. “As production increases, the vaccine effort will expand its reach.”

Launched at UN Headquarters in New York in the presence of government officials from the two countries, the new initiative will support an existing campaign – known as the Initiative for the Elimination of Cholera in the Island of Hispaniola – established almost a year ago by the Presidents of Haiti and the Dominican Republic.

Cholera is an acute intestinal infection caused by eating food or drinking water contaminated with the bacterium known as vibrio cholerae. The disease has a short incubation period and produces a toxin that causes continuous watery diarrhoea, a condition that can quickly lead to severe dehydration and death if treatment is not administered promptly.

In his remarks at the launch, the Secretary-General noted that in Haiti the disease has claimed the lives of more than 7,750 people, infected over 620,000, and added more suffering to a country already recovering from a major earthquake in 2010, the largest natural disaster in the history of the western hemisphere.

Ten months after the earthquake, the Caribbean nation experienced a major cholera outbreak.

The United Nations and its partners have been working with the Haitian authorities to respond to the outbreak, with a focus on water and sanitation facilities, as well as on training, logistics and early warning.

“Haiti has seen a dramatic fall in infection and fatality rates. But this will not be a short-term crisis,” Mr. Ban said. “Eliminating cholera from Haiti will continue to require the full cooperation and support of the international community.”

The UN chief said resources will be critical, with Haiti needing almost $500 million over the next two years to carry out its national implementation plan for the disease.

Noting that the relevant humanitarian appeals are less than half-funded, Mr. Ban said he will “use every opportunity” in the months ahead to mobilize more funding.

“Today I am pleased to announce that $215 million in existing funds from bilateral and multilateral donors will be used to support the initiative. I thank the donor community for this generous commitment,” Mr. Ban said. “The United Nations will do its part. We are committing $23.5 million, building on the $118 million the UN system has spent on the cholera response to date.”

He added that the United Nations will also continue to support the Government of Haiti in tracking cholera spending and ensure the effective use of resources.

“Today, as ever, we are in Haiti for one reason alone: to help the Haitian people make their great country all that it can be. We know the elimination of cholera is possible. Science tells us it can be done. It has happened in difficult environments around the world. It can and will happen in Haiti,” the Secretary-General added.

At the launch, the Secretary-General also announced that a world-renowned humanitarian, Dr. Paul Farmer, will serve as his Special Adviser focusing on community-based medicine and on drawing lessons from Haiti that can be applied to other places in need.