Shame on the UN for creating the deadly cholera epidemic that’s killed 7,500 in Haiti

By Patrick Cockburn, The Independent
December 2, 2012

World View: Nepalese blue-beret troops brought the disease to the stricken country after the 2010 quake, but report implies the islanders are to blame 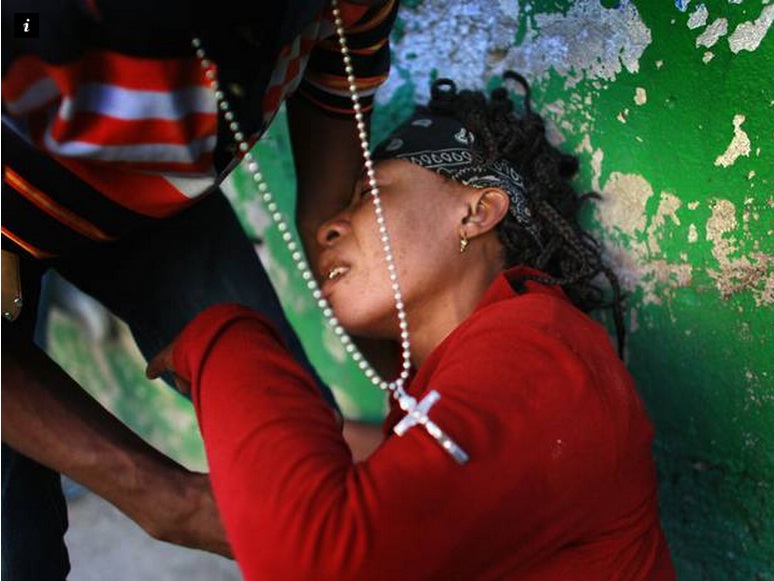 Suffering: A woman with cholera arrives at a Port-au-Prince clinic last month

Haitians suffer more than most people in the world from poverty, disease, dictatorship, occupation and earthquakes. But for the past century, they have at least been free from cholera.

Not any more, thanks to the UN. The disease was carried to the island in 2010 by UN troops from Nepal, where cholera is endemic; and it first appeared near their camps. In the past two years, it has ravaged Haiti, killing 7,500 people and making 600,000 very ill. People are still dying in large numbers and it will probably be impossible to eradicate it from the fresh water supply on the island.

There is no doubt about the UN’s culpability, though it is still trying to evade this and has not held anybody responsible for what happened. It is seeking to treat this man-made calamity as if it was a natural disaster that nobody could have foreseen or prevented. So far it has largely succeeded, because the outside world pays little attention to what goes on in Haiti, the poorest country in the Western hemisphere.

The last time the UN so fatally failed people it was meant to protect was in Srebrenica in 1995, when 8,373 Muslims were massacred by Serbian forces in Bosnia. On that occasion, it was a 400-strong Dutch unit of the UN protection force that failed to stop the massacre of defenceless people who wrongly supposed they would be all right in a “Safe Area” declared by the UN Security Council.

Srebrenica was denounced by the UN secretary general as the worst war crime in Europe since the Second World War. People still recognise the name, but how many people know that the UN presence in Haiti has led to a wholly predictable epidemic that has so far killed 7,568 Haitians, a toll that is still rising and which, sometime next year, will surpass that of Srebrenica?

The UN has yet to respond formally to the charge of starting the epidemic made against it by human rights organisations, or agree to pay compensation. It has sought to downplay the whole event, commissioning an expert report which has just been published and makes clear that the UN brought cholera to Haiti from Nepal, but claims “the source of the cholera in Haiti is no longer relevant to controlling the outbreak”.

The UN study, entitled The Final Report of the Independent Panel of Experts on the Cholera Outbreak in Haiti, is worth reading as an example of experts trying to tell a truth deeply damaging to those who commissioned the report. But at the same time, they rob their conclusions of impact by wrapping them in bureaucratic gobbledegook and claiming that nobody in the UN was at fault.

If anybody is to blame, the independent experts seem to think, it is the Haitians for being so vulnerable to the incoming bacteria brought by the infected Nepalese soldiers. Had the Haitians not used the rivers “for washing, bathing, drinking and re