By Institute for Public Accuracy
January 11, 2013 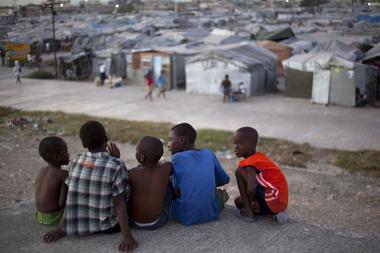 In an editorial today titled “Three years since Haiti earthquake: Learning the art of listening,” The Christian Science Monitor writes: “The third anniversary of Haiti’s devastating earthquake on Jan. 12, 2010, has not drawn much attention. This is despite the fact that one out of every two Americans donated money to the relief and thousands of people from around the world volunteered to rebuild the Caribbean nation. The reason is that the hope of ‘rebuilding Haiti better’ after this particularly big natural disaster is, well, still largely a hope. The obstacles of reconstructing a new Haiti have proved steep — such as ineffective government, powerful elites, not to mention hurricanes since then. Billions in aid has flowed in. Yet, to cite just one example of slow progress, more than 350,000 people are still living in tents.”

The following human rights advocates emphasize that “building back better” requires investing in the rule of law and including Haitians at all stages of rebuilding:

MARIO JOSEPH, [email]. (in Haiti, speaks French and Creole)
Widely regarded as Haiti’s most prominent human rights lawyer and managing attorney of the Bureau des Avocats Internationaux, Joseph has led several successful initiatives to make Haiti’s justice system more fair and effective since the earthquake. He noted that: “We have seen tremendous progress in the justice system’s ability and willingness to respond to gender-based violence since the earthquake. Our office had trials in seven rape cases in 2012, and all resulted in convictions. These cases worked because grassroots women’s groups made them work. Poor women and girl victims of rape are some of the most marginalized in the world, but they were able to work within a challenged justice system to enforce their own rights. This is what building back better looks like.”

BEATRICE LINDSTROM, [email], (in Haiti, speaks English and French)
Staff attorney with Institute for Justice & Democracy, Lindstrom said today from Port-au-Prince: “The last three years demonstrate that fundamental improvements in Haiti are achievable, but only if Haitians are involved at all stages and the building is done on the foundation of law and justice.

“Housing and cholera are two examples of areas where a failure to invest in the rule of law and to involve Haitians has resulted in slow, and even deadly progress. Instead of using available legal procedures to target the land tenure issues underlying the housing crisis, the international community and Haitian government have targeted IDP [internal displaced person] camp residents through illegal evictions and short term payoffs, without providing viable housing for displaced families. Instead of accepting legal responsibility for its negligent actions in bringing cholera to the island and providing the clean water and sanitation infrastructure necessary to stop the cholera’s killing, the UN denies the facts established by the scientific community, including the UN’s own experts, while 8,000 Haitians died.”

BRIAN CONCANNON, [email], (in U.S., speaks English, French and Creole)
Director of IJDH, Concannon said today: “These are band-aid solutions to a fundamental problem. The problem of IDP camps sitting where journalists will see them is being solved, the problem of earthquake survivors without homes is not.”