How Human Rights Can Save Haiti

Last month, United Nations Secretary-General Ban Ki-moon announced a new initiative to address the cholera epidemic in Haiti. The plan includes a variety of measures, most notably the building of desperately-needed water and sanitation infrastructure. 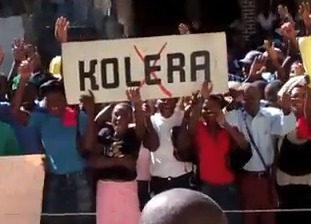 This is not yet cause for celebration. The UN and the international community have so far committed to pay only a fraction of the estimated $2.2 billion cost of the program. And the 10-year plan lacks an appropriate sense of urgency, with many more Haitians sure to die needlessly while it is being carried out.

But the announcement is definitely promising news, because it shows that the United Nations is responding to the pressure of a relentless global human rights campaign. Multiple experts, including a member of an investigatory panel appointed by the UN itself, have concluded that the cholera outbreak was triggered by the UN’s own reckless disregard for the health and safety of the Haitian people. Those investigations establish that, in October, 2010, untreated human waste from cholera-infected UN troops was dumped into a tributary of Haiti’s main waterway, leading to a gruesome wave of chaos and death that claimed 7,800 lives and sickened 600,000 more.

After two years of deflecting blame, the UN’s December 11th statement is a step in the right direction. It is a step the UN is taking only after a firm and insistent push by Haitian human rights activists and the international organizations that support them.

That push began almost immediately after the outbreak, when Haitians took to the streets demonstrating against the United Nations, gathering outside UN bases chanting: “Jistis ak reparasyon! (Justice and reparations.)” The Haitian-U.S. human rights partnership Bureau des Avocats Internationaux and the Institute for Justice and Democracy in Haiti filed legal claims against the UN on behalf of thousands of cholera victims and their families.

The movement soon went global. In the U.S., 104 members of Congress wrote to the UN demanding a fast and effective response. Advocacy groups turned up the heat with media outreach that led to influential editorials in several major newspapers, including The New York Times, calling for UN accountability. A coast-to-coast series of events featured the award-winning documentary film Baseball in the Time of Cholera, produced by actress Olivia Wilde and famed entrepreneur Elon Musk, which movingly chronicles the tragic impact cholera inflicted on one Haitian family. When a delegation from the UN Security Council visited Haiti in February, they were hounded by protesters demanding action on cholera. A petition launched by filmmaker Oliver Stone on Avaaz.org garnered 7,000 signers in its first week.

On the streets of Port-au-Prince and in the online petitions, the message is the same: Haiti suffers from cholera because the Haitian people lack basic human rights. Consider the massive criminal and civil liability that would have ensued if the UN had caused 7,000-plus deaths by dumping untreated and infected human waste in U.S. waterways. Yet, over two years since cholera exploded in the Haitian countryside, the UN has refused to even acknowledge responsibility, much less compensate the victims.

For Haitians, this is a familiar phenomenon. Once, the Duvaliers and other brutal kleptocrats used money and muscle to oppress the Haitian poor with impunity. Now it is the UN who clearly feels it is powerful enough, and its Haitian victims weak enough, that it can avoid the consequences it would shoulder in almost any other nation on earth.

But Ban Ki-moon’s statement last month suggests that the UN’s sense of impunity in Haiti may finally be eroding. Grassroots Haitian activists working for justice alongside international lawyers, sympathetic rights activists, and celebrities duplicates the classic blueprint for social change that worked to end South African apartheid, establish civil rights for African-Americans, and install democracy in Eastern Europe. It can work to bring justice to Haiti, too.

Cholera is certainly not Haiti’s only problem that begs for a human rights solution. Over three hundred thousand Haitians are still homeless nearly three years after the January 12, 2010 earthquake, despite global pledges of $10 billion for earthquake recovery. The fact that Haiti’s suffering endures despite such generosity is heart-breaking, but not surprising. When aid flows into a country whose elections exclude the most popular political party and whose resulting government threatens journalists and imprisons its political opponents, it is like trying to build a home without first establishing a sturdy foundation and durable framing. That is why the same activists calling for UN responsibility for cholera are pushing for criminal prosecution of Haitian human rights abusers, free and fair elections, and other core components of a sustainable and just society.

Haitians are proud of their history as the only modern nation to be created through the overthrow of slaveholders. They know well that recognition of their human rights will come from demand, not largesse.

So Ban Ki-moon’s cholera announcement is not bad for starters. But is time for the UN, the world’s foremost promoter of human rights, to practice what it preaches, and remedy the grievous harm it has caused.

The Haitian people, with the help of a global network of human rights activists, will insist on it. Jistis ak reparasyon.

Quigley is an Indianapolis attorney working on local and international poverty issues. His column appears in The Indianapolis Star every other Monday.