Who Will Pay for Cholera in Haiti? 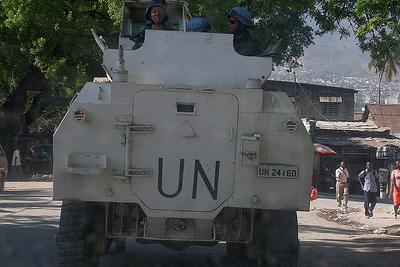 The United Nations (UN) last week rejected a legal claim for compensation to Haitian cholera victims and families, citing diplomatic immunity. The diplomatic immunity granted to UN officials essentially means that they are exempted from legal prosecution to ensure that they may effectively carry out their duties. The claim, filed by the Bureau des Avocats Internationaux (BAI) and the Institute for Justice and Democracy in Haiti (IJDH) on behalf of more than 5,000 Haitians,sought: 1) compensation for cholera victims ($50,000 for each survivor and $100,000 for each bereaved family), 2) a nationwide response by the UN consisting of medical treatment for victims and clean water and sanitation infrastructure to control the epidemic, and 3) a public apology from the UN.

The claims stem from the results of a scientific investigation conducted to determine the source of the cholera outbreak, which prior to October 2010 had not been detected in Haiti in nearly a century. The investigation overwhelmingly supported the conclusion that the Vibrio cholera pathogen was inadvertently introduced to Mirebalais, Haiti by UN peacekeepers from the cholera-endemic country of Nepal. Insufficient sanitation conditions allowed for direct contamination of Haiti’s primary water source, the Artibonite River, via the Meye Tributary. Molecular analyses showed that the pathogenic strain of cholera was a South Asian strain, confirming that the bacteria did not originate in Haiti.

The UN’s Secretary-General Ban Ki-moon has expressed his “profound sympathy for the terrible suffering caused by the cholera epidemic,” and reiterated the UN’s commitment to combatting the ongoing cholera epidemic. In addition, in December 2012, the Secretary-General announced a $2.27 billion initiative to help eradicate cholera in Haiti. Despite this, many were disappointed by the UN’s response because they believe the UN has a moral obligation to help to solve a crisis it inadvertently helped to start. Others believe the UN could have done more to prevent the outbreak through proper handling of waste and screening of personnel deployed from known cholera endemic areas. The IJDH will be appealing the lawsuit through a national court in Haiti, the United States, or Europe.