Haitian Ex-Dictator Is Questioned in Court Over Reign 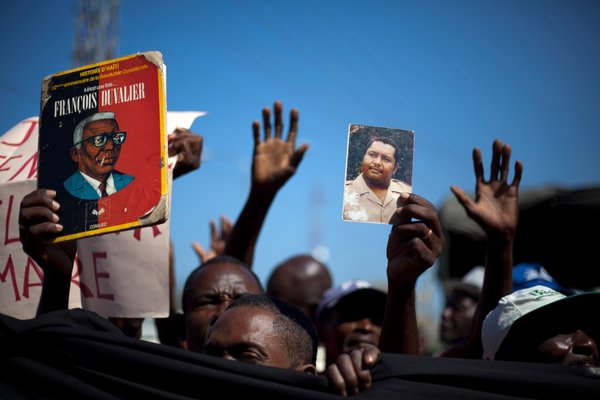 PORT-AU-PRINCE, Haiti — Jean-Claude Duvalier, the former dictator known as Baby Doc accused of bearing responsibility for the deaths, torture and the disappearance of hundreds of people, walked into a muggy, packed courtroom here on Thursday, sat down next to shocked victims and for the first time answered questions in a court of law about his brutal, 15-year reign.

The hearing, one he had avoided three times before but attended under renewed pressure from a judge, provided few answers about the violent period in Haiti that eventually ended with his downfall and the first, halting steps toward democracy. But few here ever expected the spectacle of a former dictator, dressed in a blue suit and gray tie, giving patient if evasive, and occasionally inaudible, responses while being called to account for his terror.

The judge, Jean-Joseph Lebrun, presiding over a hearing to determine if a trial should go forward, informed Mr. Duvalier that he was accused of ordering illegal arrests, torture and political killings during his tenure from 1971 to 1986.

“Were there deaths and summary executions under your government?” the judge asked.

“Deaths exist in all countries,” Mr. Duvalier, 61, replied, speaking so softly that the stenographer had to repeat his answers. “I didn’t intervene in the activities of the police.”

Mr. Duvalier, who unexpectedly returned from exile in France in 2011, later denied complicity and said that he checked out reports of abuse when they came to his attention. He defended his rule “as the son of a great nationalist,” François Duvalier, known as Papa Doc, another feared dictator whose death in 1971 put Mr. Duvalier, at age 19, in control of the country.

He painted a picture of a Haiti with less street crime than there is now and lamented the poverty and corruption that he said had become widespread.

“Upon my return, I found a country in ruins and engulfed by corruption,” he said. “It is my turn to ask, ‘What have you done with my country?’ ”

Mr. Duvalier, after his return, was charged with corruption; a court last year set aside human rights charges because it said the statute of limitations had expired. But advocates argued that it misinterpreted the law.

Some accuse the justice system of avoiding the human rights charges because Mr. Duvalier has been friendly with the current president, Michel Martelly. But victims’ lawyers pushed the case through appellate courts, leading to the pretrial hearing on Wednesday.

“This is already a historic victory in a country where the rich and powerful have always been above the law,” said Reed Brody, a lawyer for Human Rights Watch. “Who’d have thought that Duvalier would be forced one day to face his victims in a court of law, to submit to questioning about his alleged crimes, and to listen to details about his prisons and his police? Whatever happens next, Haitians will remember the image of their former dictator having to answer questions about the repression carried out under his rule.”

Mr. Duvalier’s rule was a bloody period of deaths and disappearances, many at the hands of a militia known as the Tonton Macoutes. He fled Haiti as civil unrest was tearing the country apart, leading to a period of tumultuous democracy marked by chaotic, sometimes violent elections.

In court, the names of several victims were read aloud and some of them were there, including Robert Duval, who said he was imprisoned and tortured in the 1970s. He smiled when he heard his name and said, “I’m touching myself to see if I’m alive or if it’s a dream.”

A version of this article appeared in print on March 1, 2013, on page A4 of the New York edition with the headline: Haitian Ex-Dictator Is Questioned in Court Over Reign.