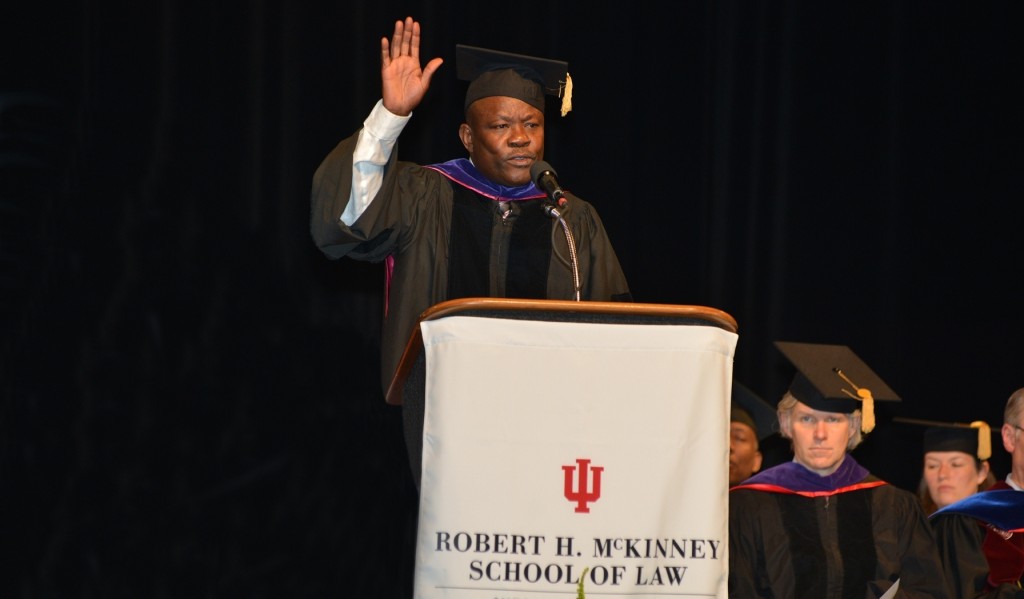 On May 11, Mario Joseph delivered the commencement address for the graduates of the McKinney School of Law.

I would like to say “Bonjou”- hello in Haitian Creole- and “Mesi”- thank you- to Dean Roberts for inviting me to address you today, and for making me an honorary member of the Indiana University Robert H. McKinney School of Law class of 2013.

Bonjou and Mesi as well to my friend and collaborator Professor Fran Quigley.

Bonjou to all the other distinguished faculty.

To the Graduates of the class of 2013, bonjou, and felisitasyon-yo–congratulations.

And last but not least, a big bonjou and a “chapo ba” – a tip of the hat, to all the parents, siblings, significant others, relatives and friends of the members of the class of 2013. In my country, we have a saying: men anpil chay pa lou: many hands make the load light. We know that it takes many hands to carry the load of building a road, a house, a school. But it also takes men anpil– many hands—to create a law school graduate. So while we are celebrating the hard work, accomplishment, intelligence and promise of today’s graduates, let us take a minute to thank those who helped them get here. Chapo ba, again.

You have probably all heard enough talk about rights here at the Law School, but I will ask you to indulge me in one more talk, this time about the rights of the people who really need our help, the most vulnerable. When you think about my country, H
aiti, I expect most of you picture misery:  a country that is poor and that has endless bad luck with natural disasters. When I look at my country, I see the same misery you do, but I do not see it caused by a lack of resources or bad luck. I see Haiti’s misery caused by a lack of rights enforcement. The inability to enforce rights keeps individual Haitians from earning, learning and voting their way out of poverty. It makes my country so vulnerable to stress that acts of nature that cause minor damage elsewhere cause catastrophes in Haiti. Even our 2010 earthquake was a rights enforcement disaster. Since then the earth has shook harder in Chile, in Japan and other places, causing a tiny fraction of the estimated 200,000 deaths that Haiti’s earthquake caused. In Haiti many building- including my office and my house—suffered damage but did not collapse. Most of the buildings that did collapse on their occupants were constructed below building code standards on hillsides so steep that construction was, in principle, prohibited.

You probably have not thought of today’s graduation as the culmination of years of rights enforcement. But you would not have even had the opportunity to deploy your hard work and intelligence without that enforcement. Like you, and me, my siblings and friends growing up in the village of Verrettes had the universally recognized human right to free, universal public education. But unlike you or me, their education rights were not enforced, so they did not go to school and today most of them cannot read. They are excluded, for life, from the immense economic, social and political advantages of literacy.

Today’s ceremony is a fulfillment of a legal contract. You complied with years of financial, academic and social obligations to the McKinney School of Law, and in return the school is obligated to present  you today with a really, really nice piece of paper. In order to fulfill your contractual obligations, you relied on the enforceability of a host of other contracts, with student loan lenders, employers, landlords, health insurance providers and others. You were protected from harm by your ability to enforce personal injury claims. You honed your skills and broadened your perspective in discussions protected by your right to free expression. Your civil rights protected you from discrimination and persecution. You stayed healthy because your right to potable water was enforced. So when I look out today over the Class of 2013, I see impressive individual accomplishment, but I also see impressive rights enforcement.

When I look out during visits to my family in my home village of Verrettes, I do not see rights enforcement. I see fertile rice fields that were taken from hard-working peasants by the dictatorships of my youth. I see women unable to enforce child support and alimony, which condemns them and their children to another generation of poverty. I pass houses where people who have been imprisoned or killed for organizing to demand economic, political and social rights once lived.  I see the irrigation ditch, where my drinking water came from when I was a child, now contaminated with deadly cholera introduced to Haiti through the negligent and reckless acts of UN Peacekeepers.

Of course you have seen this same dynamic in Indianapolis. In your clinics, you initially saw your clients as people who needed help enforcing specific rights- civil and constitutional rights for criminal defendants, immigration, disability or contract rights for others. But you soon learned that for most of them their arrival in your clinic was the product of a long and complex series of rights unenforcement. Some of you learned similar lessons studying or working on international issues, or examining the social impact of environmental or healthcare policies. All of you studied the often painful, but inexorable movement to extend the promise of your Declaration of Independence- that “all men are created equal and endowed with certain inalienable rights” to all members of your society.

When lawyers talk about rights, we usually talk about rights holders and duty bearers. In my experience, it is useful to enlarge this discussion to include another category, that of Rights Enforcers. By Rights Enforcers I mean not just judges and police. I mean the broader community of actors who help develop the conditions that allow rights enforcement for the most vulnerable in Haiti and in the United States. Lawyers are Rights Enforcers, of course, but so are policy makers, voters, journalists, donors to charity, consumers and many others.

The piece of paper you are receiving today is not only really, really nice, it is also really, really powerful.  That paper and the hard-won quality education that it represents open the door to a highly privileged career for you. If the class of 2013 follows the footsteps of previous classes, some of you will spend your careers directly enforcing the rights of the most vulnerable, working with public interest organizations here in Indiana, and throughout the U.S. and the world. Others will have the opportunity to advance rights enforcement for the most vulnerable through public service in Indianapolis at the State House and City-County Building, or in Washington on Capitol Hill.

Most of you will spend your career helping to enforce the rights of clients who have the ability to pay for that enforcement. Thanks to your skills and the education you received at McKinney School of Law, those clients will likely get their money’s worth. You will keep your clients in a position where they can continue to enforce their rights, and your clients will keep you in a position to support yourselves and your families.

As you continue along these different career paths, I would ask you to keep in mind the most vulnerable, in Indianapolis, in Haiti and elsewhere, and to keep in mind all the ways that you can serve as a highly-qualified and sorely-needed Rights Enforcer. Do what you can professionally, through your primary work or pro-bono projects. But also think of all the other ways you can be a Rights Enforcer, as a voter, as a community leader, a donor, a consumer, a member of a church or civic organization. In all these roles our basic legal skills–critical analysis of facts and law, and skilled communication of a position – are transferable to a range of tasks. Also remember that being a Rights Enforcer requires us to sometimes challenge powerful or popular institutions, and even our own beliefs.

I cannot pass up the opportunity of addressing such an educated audience to talk some about my country and yours. The most powerful country in the world has an enormous influence on daily life in Haiti, and in so many places like it around the world. Much of this influence is positive, but too often your country’s policies in Haiti are not consistent with our best interests or your highest ideals. Your country has undermined and overthrown our Presidents, and replaced them with tyrants. Your food aid policies, as President Clinton has conceded, often help your farmers with their surplus, but put Haiti’s farmers out of business, increasing our hunger.

But the American people can and do correct these policies, upholding your ideals and serving as Rights Enforcers for the people of Haiti and places like it. A good example is the case of my political prisoner client, Fr. Gerard Jean-Juste, a priest who was imprisoned illegally by a dictatorship in 2005 for speaking out against the repression of the poor. Because your country supported the dictatorship, your State Department supported Fr. Jean-Juste’s imprisonment. Your Embassy told journalists and Members of Congress that his incarceration was legal when it was not, and claimed his detention was humane, when in fact Fr. Jean-Juste was suffering from untreated leukemia.

I did my work as a lawyer for Fr. Jean-Juste, and although that should have ended the illegal detention, it did not. Human rights groups in Haiti and the U.S. denounced the persecution, but that did not work either. What finally worked was a group of people from Indiana, mostly university students and members of churches with relationships in Haiti, who got together and resolved to bring the injustice to the attention of Senator Richard Lugar. They met with Senator Lugar, then the Chair of the Foreign Relations Committee, and like the President at the time, a Republican. After the meeting the Senator wrote to Haiti’s Prime Minister about the case on January 19, 2006. On January 29, Fr. Jean-Juste was released from prison and flown to Miami for medical treatment.

An example of where we need more Rights Enforcers today is the prosecution of Jean-Claude Duvalier, one of the last century’s most notorious tyrants, who returned to Haiti in 2011. I represent eight victims of the Duvalier regime, most of them inmates in the regime’s horrid political prisons. The stories they tell are bone-chilling. Every major human international rights organization has called for an effective prosecution of Duvalier. But my government, led by a President elected in controversial and deeply flawed elections and including many Cabinet members who are the sons of Duvalier Ministers, is resisting the prosecution. Your government, out of support for my President has refused to support this prosecution, despite many requests.