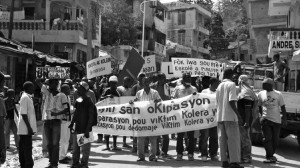 It took more than 15 months to write, and ultimately amounted to two sentences in one short paragraph – the penultimate – as if an afterthought in the two page letter signed by Patricia O’Brien, the UN’s Under Secretary General for Legal Affairs.

The claim for compensation made by IJDH, the Boston-based Institute for Justice and Democracy in Haiti, and its sister organisation, the Bureau des Avocats Internationaux (BAI) in Port-au- Prince, on behalf of 5,000 of those killed and sickened by the cholera no one now doubts was brought to Haiti by UN peacekeeping troops (see Haiti Briefing No. 70), was, as of February 21, emphatically rejected, as “not receivable.” In the words of one lawyer: “That’s UN legalese for not worth considering.”

First, an update on the toll: the 5,000 Haitians on whose behalf the claim was filed are just a fraction of the 8,292 killed and 670,500 sickened to date. That in itself is widely considered an underestimate. These are just the individuals the Haitian government has managed to count in what is still, 32 months on, the world’s most potent epidemic.

After one and a half pages detailing its efforts fighting cholera in Haiti, the key paragraph of the UN letter says that the victims’ claims are “not receivable pursuant to Section 29 of the Convention on the Privileges and Immunities of the United Nations.” The CPIUN, as it’s known, is aptly named. It includes the immunity from prosecution the UN voted itself in one of its first acts in February 1946.

The only justification for such claims coming within the purview of CPIUN comes in one further sentence in the UN letter: “Consideration of these claims would necessarily include a review of political and policy matters.” That assertion spawned mockery.

“Under this definition, any harm that the UN does anybody would be a matter of policy,” complains Brian Concannon, Jr of IJDH, cocounsel on the case. “Is the UN saying that dumping faeces in rivers is UN policy?” asks Jonathan Katz, the former AP reporter who did so much to expose the UN as the cause of the epidemic.

The UN letter makes no mention of alternative forms of redress, most notably the establishment of the Standing Claims Commission (SCC) whose institution, in the case of a private claim, is written into the UN peacekeeping Status of Forces Agreement (SOFA) with the Haitian government.

Indeed, it was the failure of the UN to make any private offer of compensation and the belief that the SCC was a façade – in 55 years of UN peacekeeping no SCC has ever been established – that led BAI/IJDH to bring the claim.

“It’s ludicrous for the UN to simultaneously claim immunity from Haitian courts, fail to follow through on its commitment to set up an SCC and also refuse to address the claims internally,” says Mario Joseph, BAI’s lead lawyer in the case. “That amounts to a complete denial of justice.” “An organization dedicated to the rule of law is itself immune from legal accountability,” concluded Armin Rosen in The Atlantic. “The UN has a troubling history of behaving as if it is above the law, perhaps because it is.” …..