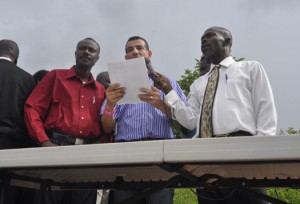 PORT-AU-PRINCE, Haiti (defend.ht) – Representatives from 31 countries attended the Continental Conference for the Withdrawal of MINUSTAH held in Port-au-Prince on Friday and Saturday under the theme “Unite for the departure of MINUSTAH”. A resolution was signed at the conference for the total withdraw of the United Nations peacekeeping forces from Haiti by May 28, 2014.

The two-day conference resulted in a resolution of six articles, one of which is Article 4, which calls for a strengthen of the National Police of Haiti by a legislative increase in the 2013-14 budget.

Other articles called for the immediate removal of soldiers of the United Nations from Haiti, a negative vote for renewal of the mandate of the peacekeeping mission by the United Nations Security Council, and protest alongside Haitians for damages to be paid for victims and families affected by the cholera outbreak, these were the demands of representatives of 31 nations with soldiers in the UN stabilization mission in Haiti.

The conference was organized at the initiative of Senator Jean-Charles Moise (Nord/Inite) who began a campaign in April, by traveling to Brazil and Argentina, urging for the removal of the UN soldiers.

“Now we come to a serious phase in the movement, that we will prevent the international community and the 5% of people who own almost all of the national wealth to hands on the natural resources of the country,” said the representative of the North, the air reassured, before several hundred supporters gathered at the foot of the statue of Dessalines on the Champ de Mars.

“No government, no foreign power can prevent this resolution from reaching his goal, said the main opponent of the government in power, Jean-Charles. May 14, 2014, get ready to celebrate the departure of MINUSTAH as it leaves the country May 28, 2014.”

In addition, Senator Jean-Charles Moses said the fight would not end with the removal of the UN force. “Even when the soldiers leave the country, we continue the fight for compensation for victims of cholera and other crimes by MINUSTAH in Haiti.”

The UN peacekeeping mission is charged with violating human rights abuses, beatings and killings of Haitians, introducing the cholera outbreak and not succeeding in its mission of providing security and ensuring the progress of democracy in Haiti.