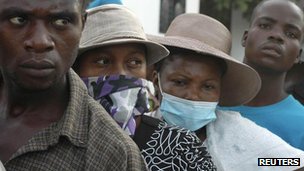 A group of international scientists studying a deadly cholera epidemic in Haiti has concluded that peacekeepers from the United Nations were the most likely source of the disease.

This conclusion could have a major impact on a forthcoming multi-billion dollar compensation claim now being mounted by victims in a US court.

The cholera epidemic in Haiti has put the United Nations in an unprecedented legal and moral crisis.

Ever since the outbreak began, all the circumstantial evidence has pointed to the source of the disease being a military camp for UN peacekeepers from Nepal, where cholera is common.

Sewage from the UN camp leaked into a nearby river and was dumped in an open pit.

The cholera then spread down the river and into Haiti’s towns and cities.

The United Nations, under massive pressure from the victims, convened a panel of top scientists in 2011.

But it concluded in an official UN report that no group or individual was to blame.

Now, the very same group of scientists has looked at new microbiological evidence.

And it has concluded that the Nepalese camp was the most likely source of the outbreak.

The families of people who died in the epidemic are planning to sue the UN for compensation totalling many billions of dollars.

The UN says it is has legal immunity from any prosecution.

But the victims say they are bringing their case anyway, in a US court. This new evidence will almost certainly bolster their claim.