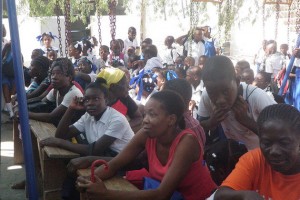 More evidence is mounting that the cholera outbreak that’s currently ravaging Haiti originated from a single soldier from Nepal who was in the country to assist in the aftermath of the 2010 earthquake.

A new study published in mBio adds support to what public health officials already thought: That United Nations peacekeeping efforts brought the disease to the island.

It’s been a rough three years for the country: Since the first case was reported in October 2010, about nine months after the January 12 earthquake (which itself killed more than 220,000 people), cholera has infected more than 660,000 people, killing more than 8,000. Cases of cholera had slowed for a period before Hurricane Sandy, but increased due to flooding caused by the storm. Prior to 2010, Haiti hadn’t had a case of cholera for more than 50 years.

The mBio study finds that the cholera bacteria currently ravaging Haiti is genetically extremely similar to a Nepalese one: “Nepalese isolates are the closest relatives to the Haiti strain identified to date, even when placed into a phylogeny with a larger collection of isolates representing recent cholera epidemics.”

The study finds that, the bacteria has “not gained any new genetic material since their introduction.” Earlier studies suggested that the bacteria had changed more significantly, putting some doubt into whether the bacteria originated in Nepal–this study confirms it hasn’t changed much, if at all.

If there’s any silver lining for the victims of the outbreak, the findings may help those who are attempting to sue the United Nations for “negligence, gross negligence, recklessness, and deliberate indifference for the health and lives of Haitian people resulting in petitioners’ injuries and deaths from cholera.”

According to the suit, peacekeepers spent three months training in Nepal’s Kathmandu valley–where there was a cholera outbreak in August 2010–prior to being deployed to Haiti in October. The petitioners want the UN to build a new water and sanitation system, pay damages to victims of the disease, and issue a public apology for their role in the outbreak. The UN claims it has legal immunity from the suit.

United Nations Secretary General ban Ki-moon has set a goal of significantly reducing cholera deaths worldwide within the next five years. Last month, he said that the agency is “striving to do everything it can to eliminate cholera from Haiti.”

“What Haiti needs is a partner ready to provide $1 million a year for the next three to five years to underwrite free vaccines for the poor and vulnerable people who need them most,” he said. “The United Nations will do its part to raise resources and strengthen the cholera response, but we also need partners who can make a difference for the people of Haiti.”

Last year, the UN announced a 10-year, $2.2 billion plan to upgrade Haiti’s water infrastructure, but according to people on the ground, there hasn’t been much progress yet.