Why the U.N. Should Take Responsibility for Haiti’s Cholera Outbreak 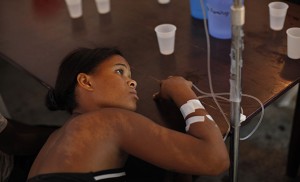 Despite much evidence to the contrary, for nearly three years, the United Nations has categorically denied that it introduced cholera into Haiti after the country suffered a devastating earthquake in 2010. Since then, cholera has killed more than 8,000 people and infected more than 600,000, creating an ongoing epidemic. As new cases continue to emerge, and the U.N.’s legitimacy continues to erode, it is time for the organization to apologize and take responsibility for the consequences of its actions and its inaction.

In a new report, Peacekeeping Without Accountability, which was released Tuesday, members of the Transnational Development Clinic at Yale Law School (YLS) and the Global Health Justice Partnership, an initiative of YLS and the Yale School of Public Health, provide scientific evidence showing that the U.N. brought cholera to Haiti and argue that the organization’s refusal to hold itself accountable to the Haitian people is both immoral and illegal. As we detail, international law, including the U.N. Charter, human rights treaties, and status-of-forces agreements (SOFAs), requires that the U.N. provide individuals affected by its peacekeeping operations with mechanisms for bringing claims against the organization. The failure to provide remedies in Haiti is part of a recent pattern of the U.N. neglecting its legal and moral responsibilities in peacekeeping operations worldwide. A continued refusal would further undermine the organization’s claim to promote the rule of law and human well-being in its missions.

The U.N. has disingenuously claimed that the scientific evidence on the introduction of cholera into Haiti is “inconclusive.”

According to extensive documentation by scientists and journalists, including Armin Rosen at The Atlantic, peacekeeping troops belonging to the U.N. Stabilization Mission in Haiti (MINUSTAH) inadvertently but negligently brought cholera into the country several months after the January 2010 earthquake. That October, troops from Nepal carrying the disease were stationed at a military base near the town of Méyè. Because of inadequate water and sanitation facilities at the base, cholera-infected sewage contaminated the Artibonite River, the largest river in Haiti and one the country’s main water sources. As locals consumed the contaminated water, cholera spread across the country. Absent from Haiti for over a century, cholera is now projected to plague the country for at least another decade.

The U.N. has disingenuously claimed that the scientific evidence on the introduction of cholera into Haiti is “inconclusive,” citing a 2011 epidemiological report that the U.N. itself commissioned. In late July, however, the same experts who wrote the 2011 report—and who are no longer employed by the U.N.—retreated from their earlier findings. While the exact source of cholera in Haiti “may never be known with scientific certainty,” they said, the “preponderance of the evidence” leads to the conclusion that MINUSTAH troops brought cholera to Haiti. Our report concurs with this conclusion, finding unequivocally that epidemiological and other scientific evidence points overwhelmingly to U.N. troops as the source of the epidemic.

In addition to rejecting scientific proof, U.N. officials have repeatedly denied their legal and moral obligations in Haiti. In a recent letter to the U.S. Congress, U.N. Secretary-General Ban-Ki Moon noted that Haitian claims for redress are not receivable under international law, as the U.N. has legal immunity. Ironically, however, the secretary-general cited the same treaty—the Convention on the Privileges and Immunities of the United Nations—that requires the organization to “make provisions for appropriate modes of settlement” for claims that arise from its missions.

While the U.N. does have legal immunity in very specific instances, it does not have carte-blanche impunity. Treaty law requires that when U.N. missions harm innocent bystanders, the organization must provide a forum for victims to seek justice—even if that forum is not a court of law.

The outcomes of the U.N. apologizing for the cholera epidemic and establishing a claims commission would in fact enhance the U.N.’s overall legitimacy.

Along with its standing responsibilities under treaty law, the U.N. accepted obligations to respect the human rights of Haitians, including their right to health, when it signed a SOFA with Haiti in 2004. Among other guarantees, this agreement explicitly promised to create a “standing claims commission” to review “any dispute or claim of a private-law character”—meaning, claims arising from injuries or contract violations attributable to the U.N. Yet the U.N. has not established a claims commission in Haiti. In fact, our research shows that, while the U.N. has promised claims commissions, if needed, in over 30 SOFAs since 1990, the organization has not established a single commission. Given reports in several countries, including Haiti, of wrongdoing and negligence by peacekeepers, the failure to establish claims commissions has left countless victims without access to justice.

The U.N. has suggested that accepting accountability for the cholera epidemic would prove a slippery, dangerous slope. It claims that owning up to its deeds would complicate and possibly compromise MINUSTAH and other peacekeeping missions, set an untenable precedent for addressing the consequences of peacekeeping around the world, and pose a large financial burden. However, these are inadequate reasons to deny responsibility. We argue here and in our report that the outcomes of the U.N. apologizing for the cholera epidemic and establishing a claims commission, looking to models like the September 11th Victims Compensation Fund and U.N. Compensation Commission in Iraq, would in fact improve its operations, set a stronger precedent for future accountability in peacekeeping missions, and enhance the U.N.’s overall legitimacy.

The U.N. has played an important role in Haiti’s post-earthquake recovery effort, yet it has also caused great harm. The organization’s ongoing unwillingness to hold itself accountable to the victims of cholera violates existing obligations under international law. Moreover, by failing to lead by example, the U.N. is undercutting its core aims of promoting international peace, law, and human rights. As the third anniversary of the Haitian epidemic approaches this October, it is time for the U.N. to live up to its mandate.