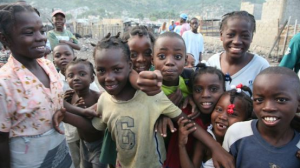 It’s been 42 months — three and a half years — since Haiti’s calamitous January 12, 2010 earthquake killed hundreds of thousands and left a million destitute in the hemisphere’s poorest nation.  It was a hammer blow piling misery on misery.

President Obama immediately promised leadership to help Haiti and an idea surfaced, broached by Republican Elliot Abrams in the Washington Post ten days after the quake and supported as effective and easy to implement by virtually everyone ever since: expedite entry into the United States of close relatives of U.S. citizens and legal permanent residents on years-long wait lists in Haiti despite already having been approved to join their family members by the Department of Homeland Security.

Editorial boards, think tanks and 100 members of Congress asked: “Why should already-approved beneficiaries have to wait years longer in devastated Haiti when speeding their entry would save their lives, reunite families, enrich the U.S. Treasury via work permit application fees and speed recovery by generating remittances to loved ones in Haiti?

Better yet, they said, there’s good precedent — the ongoing Cuban Family Reunification Parole Program which DHS created in 2007 and renewed in 2010!  So why hasn’t President Obama acted more than three and half years after the earthquake?

According to the State Department, as of last November 1st there were 106,312 Haitian beneficiaries of DHS-approved family-based immigrant visa petitions, including 11,715 minor children and spouses of U.S. green card holders.  But they are on wait lists of two to twelve years in Haiti, where many may not survive given conditions there.

The president can speed this up today if he wants to, and his representatives promised Haitian-American leaders during last year’s campaign that he would do so promptly if re-elected.  Unfortunately, it hasn’t happened.

Ten editorial boards, the U.S Conference of Mayors, the New York and Philadelphia city councils, the Congressional Black Caucus, twelve high-ranking U.S. senators including two Republicans, the NAACP, the American Bar Association, Massachusetts Governor Deval Patrick, the Florida State Senate, Republican House members Ileana Ros-Lehtinen and Mario Diaz-Balart and over 6,000 petitioners are among many groups and leaders who have urged President Obama to immediately create a Haitian Family Reunification Parole Program.  They cite the remittances, and the “double standard” given the Cuban program under which tens of thousands have entered since 2009 alone.

Why not do the same for Haitians, given the merits?  Don’t Haitians deserve equal treatment?  Was the president serious in promising to lead on Haiti’s recovery?

Before last November’s election, Haitian American leaders in swing-state Florida received assurances from high officials that the president, if re-elected, would promptly authorize the entry of at least the subgroup of approved minor children, but nine months later they remain in Haiti.

The White House is aware, but last November the president needed every Haitian-American vote in Florida, the community’s political clout is small, and the White House is reluctant to do anything unilaterally related to immigration – even save these children — while comprehensive immigration reform legislation (CIR) is pending in Congress.

So the children, despite DHS approvals to come join their parents, remain subject to conditions in Haiti, including an uncontrolled cholera epidemic, inadvertently introduced in late 2010 by United Nations troops, which has killed thousands.  (Haiti hadn’t had a cholera outbreak in 100 years.)

The White House should bring in the approved minor children now, as it promised last Fall, without more delay!  No congressional action is needed, just a simple White House instruction to DHS.

Better yet, it should immediately have DHS create a Haitian Family Reunification Parole Program, like the ongoing Cuban one!

Unfortunately, administration strategists seem to fear that saving these children might derail the immigration reform effort in Congress (as if it could!), although that effort is far off the rails already.

CIR passed the U.S. Senate in June but is going nowhere in the Republican/Tea Party House. The Senate bill is badly flawed – it eliminates some time-honored family reunification categories altogether, to cite just one example – but House Republicans consider it too liberal and are so anti-immigrant that they won’t even consider it!

What Miami Herald editors wrote on March 22, 2010, in the first of its four editorials urging the president to create a Haitian Family Reunification Parole Program, remains true: “There is no valid argument for failing to move quickly on this front.”

Mr. President, please give this your attention now!  Failing these vulnerable children and families is inhumane, counterproductive, unwise and unworthy of your presidency.

Readers wishing to engage on this issue are encouraged to contact the undersigned and the president.