Cholera as Both a Health and Political Issue

The UN is still not doing enough to stop the cholera epidemic in Haiti.  Some say it’s due to this being a complex political issue.

UN sued for cholera, refuses to talk about it 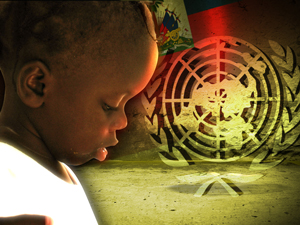 UNITED NATIONS (FinalCall.com) – Haitian activist organizations remained true to their word by filing an early October class action complaint on behalf of five Haitian families who have suffered because a cholera outbreak in the country tied to UN peacekeepers.

The suit was filed in the United States District Court Southern District of New York. The defendants in the suit are the United Nations, the UN peacekeeping mission in Haiti and UN Secretary-General Ban Ki-Moon. The UN and the secretary-general are charged with complicity in bringing cholera to the Caribbean nation in 2010.

The Boston-based Institute for Justice and Democracy in Haiti and the Haitian-based Bureau Des Avocats Internationaux said the lawsuit was necessary after a February letter 2013 from UN secretary-general stated that their 2011 calls for compensation for cholera victims in 2011 would not be honored.

Since then some UN officials, including High Commissioner for Human Rights Navi Pillay, have said cholera victims should be compensated. Ms. Pillay made her remarks in August during a speech in Geneva, Switzerland, while others have said the UN needs to come clean about Haiti’s cholera epidemic. In July, the UN’s special panel of experts concluded that peacekeeping troops were the most likely cause of the epidemic.

“But this broad recognition of the UN’s responsibility has not led to justice for the cholera victims, or concrete progress towards stopping the cholera epidemic’s killing,” said Atty. Brian Concannon Jr. of the Institute for Justice and Democracy in Haiti in an e-mail to The Final Call.

Some international law experts say the UN and UN entities are immune from domestic lawsuits.

The lawsuit says since the introduction of the vibrio choleras in 2010, some 8,300 Haitians have died while over 650,000 have been sickened. An Aug. 1 report by the UN Office for the Coordination of Humanitarian Affairs noted that from Jan. 2013 to Aug. 2013 there were 312 deaths recorded, while 35,478 new cases emerged.

The secretary-general’s media office told reporters seeking comment about the Oct. 7 legal filing that the UN had “commented” a lot in recent months. Therefore, the spokesman’s office said, there would be no response to lawsuit claims.

In the corridor outside of the UN Security Council, French UN ambassador Gerard Araud told reporters pressing him for a reaction that the UN had made an answer through the assessment of the secretary-general, which was based on the Convention of Privileges and Immunities, adopted at the world body’s inception in 1946. That assessment was the UN was not liable for anything.

“No one at the UN is going to say they believe in the scientific facts being presented; the political situation at the UN dictates that they deny the UN role,” Frantz Jerome of the N.Y.-based Citizens Committee for the Protection of Haiti told The Final Call.

The cholera epidemic in Haiti is very complex, and very much connected to the issues of who would control Haiti’s water and its trillions of dollars worth of natural resources, Mr. Jerome said. “Look at the timing of the introduction of the disease, when there was talk about the discovery of gold and oil and who would control these resources,” he said. “The cholera epidemic has managed to keep the people in a state of chaos, another means of divide and conquer.”

Mr. Jerome said the figure of 8,000 deaths is low, because in rural areas relatives are told to cremate the dead to prevent the spread of the disease. Nobody really knows the correct death count, he said.

The secretary-general’s spokesman told reporters Mr. Moon’s focus is helping the people of Haiti overcome the cholera epidemic. “And the key component of that is funding,” he said.

The UN says it is working to fund its $2.4 billion “cholera elimination plan,” Mr. Concannon said. “But the amount raised in July was $30 million less than what was raised last December when the effort was launched. The UN said $450 million was needed over the first two-years of the program.”

UN watchers say a high-level donors meeting to raise funds for the plan scheduled for October has been postponed until next year.

The UN Office for the Coordination of Humanitarian Affairs warned over the summer that: “Resources for cholera response, including funding and staff, have been in steady decline since 2012; if this trend continues it would be virtually impossible to effectively and efficiently respond to the epidemic.”

Ambassador Lyall Grant of the United Kingdom balked during Oct. 10 proceedings to extend the mandate for Haitian peacekeepers. “This makes no sense, mandating 5,000 military peacekeepers in a country where there has been no recent military conflict,” he said.

According to UN data, the Haiti peacekeeping budget for 2013-2014 is $576.6 million. The UK ambassador told the Security Council those funds should be transferred to UN agencies that would ensure long-term support for Haiti.