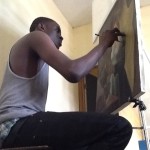 art collective associated with APROSIFA, an organization that works to improve the health and well-being of people in the communities of Carrefour-Feuilles and Martissant, which includes supporting the artistic endeavors of local artists. “We are united for the artist (dedicated) to giving one another color!” Remarks Jeanbaptiste. Jeanbaptiste hopes to one day attend university. For now, he often finds inspiration from the works of Leonardo Da Vinci. He says that he loves the tones in his work. Remnants of Da Vinci’s influence is seen in his painting up for auction. 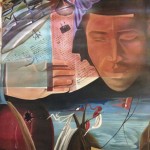 This moving self-portrait is a dark portrayal of the devastation the people of Haiti have suffered since the outbreak of Cholera. Jeanbaptiste notes, “I want to explain the misery of the Haitian people.” In his comments about the changes that occurred in his work after the earthquake, “After the earthquake, I was really traumatized. I was really violent in my work, because the way I do to survive was really bad. I was victim in spirit!”