Mining companies are interested in Haiti’s resources but it may lead to a bad situation for Haitian farmers and Haitians in general.  This article discusses the best ways these companies may make their move, by including Haitian voices and interests in the discussion.

Haiti’s wealth of untapped mining resources must benefit the poor 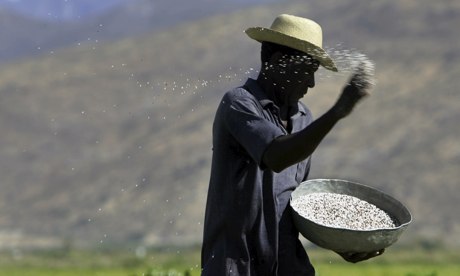 A man throws fertiliser on a rice field in Artibonite Valley, central Haiti. The country has a wealth of minerals of strong interest to mining firms. Photograph: AFP/Getty

In 2012 I wrote about the mining situation in Haiti and the vast potential for this sector. Mining companies could provide an increase in tax revenues and bring employment to the country – both of which are much needed.

But more than a year later, it is not clear that the benefits mining companies could bring to Haiti would outweigh the costs they inflict – for instance, throwing poor people off their land, polluting our soil, air and water, and generating further inequalities of wealth and power. As in other countries around the world, we could suffer the resource curse.

Over the past five years a few companies have undertaken exploration and now they are trying to get licensed to explore further. Recent estimates suggest that around 2,400 sq km of northern Haiti – or about 8% of the surface of the entire country – could be ripped away from local farmers and given to US and Canadian companies.

The mineral wealth for this area, which includes gold, copper and silver, is estimated to be worth more than $20bn (£12.1bn).

Alarmingly, some contracts have been granted behind closed doors, without scrutiny or participation by Haitian civil society or parliament. Opening this kind of opportunity to foreign investors without proper laws, enforcement and transparency in place has created much anger among the population and some politicians alike.

Based on a report by local and international civil society groups, the senate voted to block all of these contracts last February, but the vote cannot force the foreign companies to stop their activities and, so far, we do not know how firms have responded.

Nor do we know which mineral companies are already extracting, or what payments they are making to the government in taxes and royalties.

For its part, the mining and energy office, with the help of the World Bank, wants to replace the obsolete 1976 mining law this year, because the current law fails to take into consideration market conditions and how modern businesses function. However, the mining forum in June 2013, organised by the Bank and the Haitian government, was simply for show since the Bank had rewritten the law in May before the forum even took place.

This undermines the credibility of the Bank, especially since it has emerged that it has invested its own funds in some of the foreign mining companies in Haiti.

In response, some local organisations have been asking for a new mining law that takes into consideration relevant international conventions – for instance, on people’s rights to be properly consulted and compensated in relation to possible new uses of their land, on pollution control, on taxation, and on transparency around mining deals and mining companies’ finances.

Despite these problems there is still time to make things right for the mining industry in Haiti, the farmers living in the areas the companies want to exploit, as well as the country as a whole.

For this to happen I would propose a few directions. First, we need genuine consultation between the government, the mining and energy office, the mining industry, the World Bank and Haitian civil society. There must be more transparency and opportunities for public participation in decisions about possible mining deals between companies and the government.

This requires not only making information available, but communicating this information appropriately in Creole, the language of the population. Communities must have the right to free, prior and informed consent to any use of their land by mining or other companies. We also need environmental impact studies, companies must be responsible for paying for work to prevent and clean up all the harm that they do.

In addition, Haitian civil society must be given a genuine say in how the government spends the payments it receives from the mining industry – and how those payments are distributed across the country, taking into account which communities are most affected by mining activities. It is critical that the state ensures that mining companies pay Haitians a fair return for the valuable minerals that they are taking from us.

We must learn from the mistakes made by many other countries that struggle to get such companies to pay their fair share, including those in Latin America and the Caribbean, and not submit to the scandal of inequality.

The most important lesson is that companies and governments behave better when they know that everyone can find out about the level of payments they are making to governments. This helps to reduce opportunities for tax evasion and corruption, and should be a central part of Haiti’s new mining law.

The mining industry could be profitable for Haiti. If the government invests mining revenues in education, health, environmental protection and other basic services, it has the potential to resolve a lot of problems that vulnerable and poor Haitians are facing.

So far, however, the exclusive closed-door negotiations and secrecy surrounding the industry is akin to inviting the resource curse to come to stay in Haiti.