Plans for Reconstruction in Haiti Are Succeeding

There has been a lot of progress in rebuilding in Port au Prince, though many think it’s still not enough. This article discusses what is being done and what’s planned for getting people out of tent camps into permanent housing, as well as information from Haitians, government officials, and developers post-quake.

Port-au-Prince: collision of ideals and aid have yoked progress

In a post-earthquake city that has seen coups, invasions and disease, redevelopment is either going strong or standing still depending on who you speak to and what their agenda is 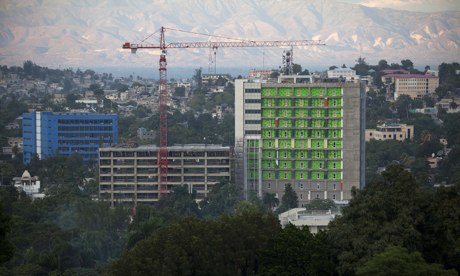 Nearly four years after the earthquake that eviscerated their city, Jimmy Alex, a chauffeur, and Magalie Noel, a schoolteacher, personify Haiti‘s capacity for resilient hope and determined rebuilding amid the ruins that remain on their doorstep.

At either end of the social spectrum, Jimmy and Magalie’s response tothe 7.0-magnitude quake that struck in the early hours of 12 January 2010 was identical. Both their houses fell down, so they simply moved their families out into the front yard. With more spare cash than Jimmy, Magalie quickly built a tiny structure near the rubble of her home.

Jimmy stoically lived in a tent for 15 months, then scraped together $1,500 (£917) to build the single room he shares with his wife and two children. “I received no help from the government or anyone, so I just have to carry on building on my own, whenever I have cash,” he says. For Magalie, the money saved by leaving the rubble intact was worth more than the psychological benefit of its removal. “It’s true I don’t like seeing my destroyed home everyday, but at least I’m solvent,” she says.

Good Samaritans, pundits and city planners might wish the pair’s pragmatic but rapid response had been more generally adopted by the Haitian authorities. “The city looks like the earthquake happened yesterday,” laments Marcus Garcia, who edits the diaspora weekly Haiti en Marche from Port-au-Prince. The reference is to broken or non-existent roads, roofless buildings including two major cathedrals still staring into the sky, and 306 camps for internally displaced people according to the International Organisation for Migration (IOM). That’s about a quarter of the 1,200 tent camps at the peak of the crisis.

Right after the quake, Port-au-Prince residents described the sky above the city as grey with dust, the roads impassable because of rubble, houses flattened like pancackes lining every street. Milind, an Indian-American businessman who has lived here 25 years, says it was “a nightmare except that you never woke from it. Nothing stood straight … hell, nothing was standing, mountains of debris blocked every road, you had to walk to get anywhere or take a motosiklet [motorcycle taxi].” 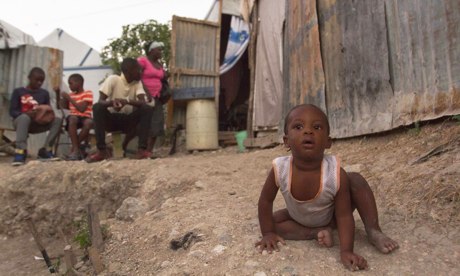 A baby boy sits next to his house in a refugee camp for displaced people in Port-au-Prince, in 2014. Photograph: Jean Marc Herve Abelard/AP

The city was drowning in a concrete deluge estimated at 22m million cubic yards of heavy debris. The beautiful white French Renaissance National Palace, which housed the residence and office of the president, was heavily damaged and stood forlornly as a painful symbol of the tragedy.

Today, Port-au-Prince is still an eyesore. President Michel Martelly’s offices are in a temporary building near the gaping void that once was the palace. The occasional buckled wall and cracked building still stands limp and ghostly in most neighbourhoods, an untenanted reminder of the disaster. And up the steep mountainsides stand hundreds of flimsy structures composed of USAid plastic sheeting and grain sacks, the letters and logo faded. As of last October, according to the IOM, 171,974 people – down from 1.5 million – were living in these lean-tos.

Venette Jean Louis is one of them. The 37-year-old unmarried mother of three is in a camp that houses approximately 500 people in Canape Verte, a neighbourhood high in the hills. “At least we don’t pay rent,” she says of her squalid living arrangements. As is the norm, the camp has provided itself with “priz”, the Haitian Creole term for free electricity obtained by sneakily hooking on to the grid. It has 18 toilets built by an NGO, but no showers. “You wash inside,” says Venette. She is uncertain if she wants to move. “We all know it’s not our land, so eventually we’ll have to,” she admits. But she is vague about where she would go or how she would pay for accommodation. “The rebuilding is going so slow, we want the IOM to come back. They could give me $500 to resettle, I’ve heard from others who got it, so I could at least pay rent for some months.”

The slow march of progress

It is four years since the earth shook so hard that the city’s terrified people created a new colloquialism for an earthquake – “goudou goudou”, the sound of the rumbling they heard beneath their feet. Should Port-au-Prince not be in better shape by now?

“If you were here right after the quake, you would know the difference between the city then and as it is now,” says Harry Adam, the engineer-architect who heads the Unite de Construction de Logements et de Batiments Publics (UCLBP). “The change is incredible.” 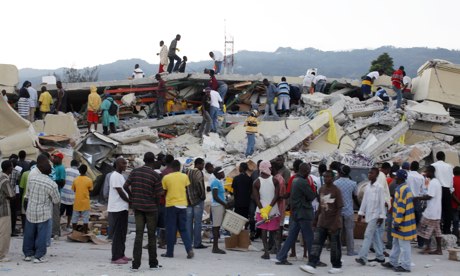 Poeple in Port-au-Prince search for survivors after the earthquake struck, in 2010. Photograph: Eduardo Munoz/Reuters

Adam reports directly to the Haitian prime minister, Laurent Lamothe, for his gargantuan three-pronged job, which he lists as follows: moving everyone out of the tents; formulating an institutional response to the lodging issue; and rebuilding public structures. He asserted that all the new construction is earthquake-proof, which adds 30% to the tab.

The World Bank has helped develop a national building code and trained a new technical team at the public works ministry to ensure standards. As befits the nodal construction entity whose slogan is “Reconstruire mieux” (rebuild better), the UCLBP is housed in a relatively comfortable prefab structure that’s less grungy than other government offices. Adam ticks off projects currently underway, including building eight new ministries (40 public buildings were destroyed) along the main Rue Champs de Mars downtown. But first, that street will have to be widened to reflect its projected grandeur as the heart of government. Adam says Martelly, a former entertainer intuitively sensitive to public applause, is enthusiastic.

The rebuilding plan mixes functionality with the psychologically important and moral-boosting feelgood factor. Starting in Christmas 2012, tent camps were removed from two public parks in the city’s upmarket district of Petionville. Wilson, who sells bottled soft drinks at Place Boyer, one of the green and pleasant newly reopened parks, says the camp’s removal has knocked the bottom out of his trade. “The Red Cross used to buy from me. Now, I don’t sell much. But it is clean and beautiful now,” he allowed.

A third park, not far from Venette Jean Louis’s camp, has been cleared and is currently being rebuilt. Work is also under way on a 3,000-house complex in Morne Cabrit, outside Port-au-Prince. So far, only 120 are ready but “the developer is giving us 50 houses a week”, says Adam. He shakes his head at the reluctance even homeless people have shown to be “pioneers in new neighbourhoods”. Phase II of the development will have 4,000 more houses. 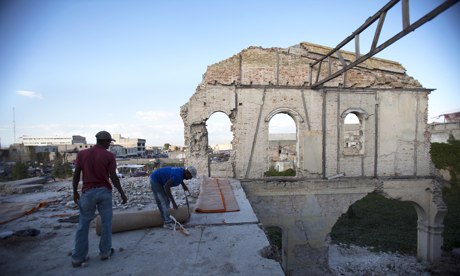 Vendors use the open space of an earthquake damaged building to cut carpet for a client near their shop in downtown Port-au-Prince, in 2013. Photograph: Dieu Nalio Chery/AP

Spreading the wealth, or trying to

Adam dismisses criticism of the resettlement scheme – a year’s rent – as an expensive and too temporary an incentive. The scheme covers people in tents, who are willing to move, and according to Adam the money from international donors is used to pay the first year’s rent. He says: “70% of those we resettled are still in the same property a year later and they’re paying their own rent.” But a new survey disputes this.

The Institute for Justice & Democracy in Haiti (IJDH), a US-based group of lawyers and its Haitian affiliate Bureaux des Avocats Internationaux (BAI), claims that resettled people now face another housing crisis because their cash rental money is nearly at an end. The survey is based on answers provided by 44 families between and one and two years after their relocation. But part of the problem, according to the World Bank’s special envoy to Haiti, Mary Barton Dock, is that houses were scarce in Port-au-Prince even before the quake.

Maarten Boute, a Belgian businessman who has lived in Haiti five years, says: “The quake didn’t cause the slums and the squatters. It merely brought the problem to everyone’s attention.”

Adam agrees and offers the national housing policy, Haiti’s first, as a possible answer. Published three months ago, it recommends mortgage schemes among other things, though the banks have yet to come on board. 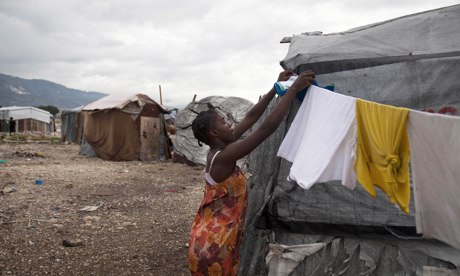 A woman fixes a clothes line next to her temporary housing tent in Port-au-Prince, in 2013. Photograph: Dieu Nalio Chery/AP

But the finance minister, Wilson Laleau, is doubtful rebuilding will have any real impact on living conditions until Haiti finds another developmental axis. “Port-au-Prince’s problem is Port-au-Prince. It swallows everything,” he says.

Not everyone is complaining. Jean-Arnold Farfan, a security guard, used the post-quake chaotic anonymity to exercise squatter’s rights over a small plot of land. “If the quake hadn’t happened, I would never, in my life, been able to have a house of my own,” he says. Farfan, 43, describes the process by which collective catastrophe metamorphosed into a personal triumph. Till the quake, he rented a house with his wife and two children. “Living in a tent camp meant we saved on rent. When I found some land, I built a small house from those savings.”

His story illustrates a Creole saying, “catastrof se pa negatif net“(catastrophe is not wholly negative). But that may be hard to stomach if you’re Jimmy or Magalie, or countless others in a city that is rebuilding slowly and painfully.