Yet another natural disaster is striking Haiti, where people are still recovering from the 2010 earthquake, as well as droughts and floods in 2012 caused by Tropical Storm Isaac and Hurricane Sandy. Two harvest seasons have already been lost due to the eight-month-long drought in northeast Haiti. Food and water are scarce, and international aid organizations are working with the local government to coordinate a response effort. 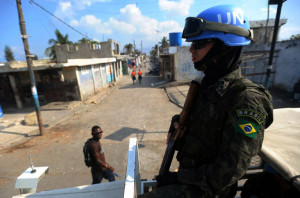 A state of emergency has been declared across northeastern Haiti. This is a country where 78 per cent of the population lives below the poverty level. A severe drought is wiping out sorely needed crops and livestock.

The eight month long drought has caused the loss of two harvest seasons. The hardship is evident in some schools where there is food for students but no water to cook with.

There has been some rain in the area recently but not enough to replenish crops. Indeed the second rainy season began later than usual last year.

Until last November, rainfall had been evenly spread across the crop-producing areas, but that second rain season which usually comes in August, was almost three weeks late. To make matters worse, northeastern Haiti received very little of that rainfall.

Nearby, Jamaica has also been in a state of drought. The government has recently had to dispatch water trucks to the drought-parched west of the island.

The Ministry of Water, Land, Environment and Climate Change says that at least six parishes have been affected, including the one that holds the popular tourist spot of Montego Bay.

There is the possibility of some thundery showers around the northern Caribbean this week, but many places will not see any wet weather. The dry season across the Greater Antilles runs until the end of March.