UN Human Rights Expert Gustavo Gallón surprised many when he stood up for cholera victims in a report on Haiti. The otherwise-ordinary report called for compensation of victims and punishment of those responsible. These statements are the strongest so far in a time of increasing support from current and former UN officials. 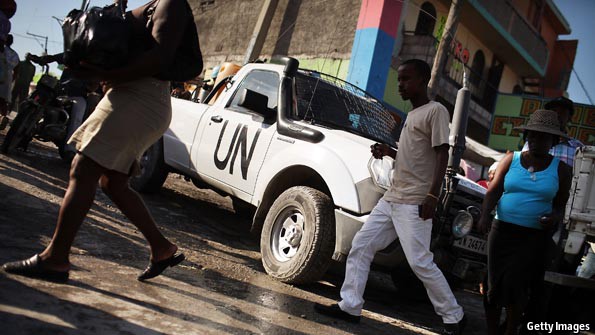 LAST month the United Nations’ Independent Expert on Human Rights in Haiti delivered his annual assessment (French version here) of the state of the poorest country in the Americas. Gustavo Gallon, a respected Colombian jurist, wrote of many troubling—and familiar–problems. They included prolonged pre-trial detention for 80% of all prisoners in Haitian jails; institutional “brittleness” on account of long-delayed elections to the Senate and local bodies; rising homicide rates; and a depressing predilection for public lynching, which indicates little confidence in the justice system.

If the indictment of Haiti was unsurprising, less predictable was Mr Gallon’s position on the country’s cholera epidemic, which first broke out in 2010. More than 8,000 Haitians have since died from cholera, and nearly 700,000 more, or one out of every 16 people, infected. Medical evidence indicates the cholera strain was brought to Haiti by Nepalese UN peacekeepers, although the UN neither admits responsibility for the outbreak nor agrees to make reparations. In October 2013 human-rights lawyers filed a class-action claim on behalf of the victims; the UN, which claims diplomatic immunity against such claims, is reportedly refusing to acknowledge even being served the lawsuit.

Mr Gallon’s report is consequently significant. He called for “diplomatic difficulties” to be resolved to “stop the epidemic” and to compensate victims fully. Silence is the very worst response, he noted, echoing his predecessor’s more muted assessment from a year ago. Mr Gallon’s forthright remarks are being seen as a sign that a heated argument is underway at Turtle Bay, the UN’s New York headquarters. The battleground is the gap between UN’s irredeemably idealistic purpose and its all-enveloping legal immunity. Even the UN’s human-rights chief, Navi Pillay, has acknowledged that someone (she didn’t specify who) needed to pay up for the suffering and havoc wreaked by cholera. Retired officials, including Canada’s ambassador to the UN, Stephen Lewis, have spoken in the same vein.

However the debate is settled, compensation would only be palliative. The bigger concern is eliminating the disease. Last year, according to Haiti’s health ministry, there were nearly 600 deaths. Late last month, the UN’s first cholera envoy, Pedro Medrano, said that falling mortality rates do not signify the end of the “silent emergency” because a cholera epidemic can ebb and wane and come back stronger as the bacterium mutates. Mr Medrano says the best chance for cholera eradication lies with a $2.27 billion UN fund-raising campaign that would help fund a proper water and sanitation infrastructure, among other things. Whatever its responsibility for introducing the disease, the UN is also Haiti’s best hope for getting rid of it.