The Obama Administration supports UN immunity in the cholera case, saying that UN officials and MINUSTAH cannot be sued. 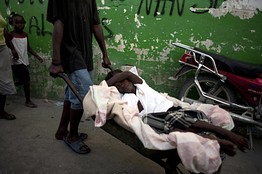 The Obama administration has told a federal judge that diplomatic immunity shields the United Nations from liability for a cholera outbreak that ravaged Haiti after the 2010 earthquake.

Haitians living in the U.S. and Haiti have filed at least two lawsuits seeking class action status in federal courts in New York claiming that the U.N. failed to screen infected peacekeepers deployed from Nepal. The lawsuits also claim the U.N. mission constructed shoddy sanitation facilities that allowed contaminated human waste to run into the country’s major river, helping to spread the disease.

The 2010 cholera outbreak killed more than 8,000 Haitians and sickened hundreds of thousands, according to U.S. officials.

The latest lawsuit was filed on Tuesday in Brooklyn federal court on behalf of nearly 1,500 residents of Haiti and the U.S. who say they “have been or will be sickened, or have family members who have died or will die, as a direct result of the cholera introduced to Haiti.”

The named plaintiffs are four Haitians living in New York City and Atlanta whose father and stepmother were allegedly killed by the disease. A similar lawsuit on behalf of Haitian victims was filed in Manhattan federal court in October.

While declining to comment specifically on the litigation, a spokesman for U.N. Secretary-General Ban Ki-moon said in a statement Wednesday that the U.N. “continues to be committed to do all that it can to help the people of Haiti overcome the cholera epidemic.”

Last month, the U.N.’s Under-Secretary-General for Legal Affairs, Miguel de Serpa Soares, wrote to U.S. Ambassador Samantha Power asserting “that the United Nations continues to maintain its immunity and the immunity of its officials in connection with this matter,” according to court documents.

On Friday, the Manhattan U.S. attorney’s office expressed its agreement with the U.N. in a letter to the Manhattan federal judge presiding over the case. The letter says the U.N. enjoys absolute immunity that hasn’t been waived.

“[B]ecause the U.N. has not waived its immunity in this case, the U.N., including [the U.N. Stabilization Mission In Haiti], enjoys absolute immunity from suit, and this action should be dismissed as against the UN for lack of subject matter jurisdiction,” the U.S. attorney’s office wrote.

The plaintiffs say the U.N. has “well-established legal obligations,” citing a 2004 “stabilization agreement with Haiti” that they say explicitly waives sovereign immunity.

They are asking a U.S. district judge to order the U.N. to set up a claims commission that would compensate victims and pay for water and sanitation improvements. “We’re asking for some modest compensation,” Stanley Alpert, an attorney for the plaintiffs and former federal prosecutor, told Law Blog. “Nobody is talking about American-style punitive damages.”