This article details the recent BAI/IJDH report on workers’ rights in Haiti. It discusses garment workers’ low wages and poor working conditions, terminations of workers who joined unions, and the Haitian government’s complicity in impunity for garment factories and other corporations. 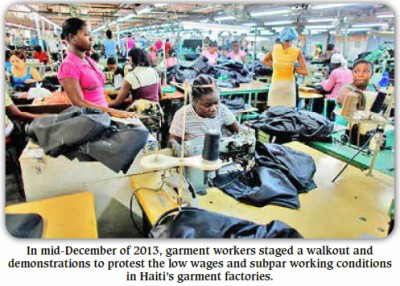 The Institute for Justice and Democracy in Haiti (IJDH) and its Haiti-based partner Bureau des Avocats Internationaux (BAI) have released a report outlining recent cases of persecution of organized workers in Haiti as well as Haitian government complicity in allowing illegal attacks against, and terminations of labor activists to occur without judicial consequences.  The report, titled “Haitian labor movement struggles as workers face increased anti-union persecution and wage suppression,” documents attacks and firings of union organizers by both public and private sector companies.

In mid-December of 2013, garment workers staged a walkout and demonstrations to protest the low wages and subpar working conditions in Haiti’s garment factories.  As Better Work Haiti revealed in its 2013 Biannual Review of Haitian garment companies’ compliance with labor standards, only 25% of workers receive the minimum daily wage of 300 Haitian gourdes (equivalent to $6.81). They also found a 91% non-compliance rate with basic worker protection norms. The BAI/IJDH report explains that on the third day of the December protests, “the Association of Haitian Industries locked out the workers, claiming they had to shut the factories for the security of their employees.”  In late December and January, IJDH/BAI documented “at least 36 terminations in seven factories throughout December and January in retaliation for the two-day protest, mostly of union representatives. The terminations continue.”

The report notes that union leaders at Electricity of Haiti (EDH) – Haiti’s biggest state-run enterprise – have also been illegally terminated and even physically attacked.  As BAI/IJDH describe: “On January 10, 2014, the leaders of SECEdH [Union of Employees of l’EDH] held a press conference at EDH, as they had countless times over the last several years. The purpose of the January 10 press conference was to allege mismanagement and corruption at EDH. At the last minute, EDH management refused to let journalists in the building, although they had given permission for the press conference the day before. SECEdH’s leaders joined journalists on the street outside EDH’s parking lot gate to convene the press conference. EDH security guards pushed down the metal gate onto the crowd, hitting SECEdH’s treasurer in the head and knocking him unconscious. The security guards stood by while the employee lay on the ground bleeding and witnesses urged them to help. Some journalists took the injured employee to the hospital in one of their vehicles. He was released from the hospital but suffers constant pain in his head, shoulders, arms, and back from the heavy gate falling on him.”

The report goes on to describe government complicity with employer infractions of labor laws at the level of the judicial system, where “public and private employers enjoy impunity” and where workers continue to have extremely limited access to the justice system as “court fees and lawyers are too expensive for the poor to afford” and “proceedings are conducted in French, which most Haitians do not speak.”  Moreover, the Labor Ministry as well as the Tripartite Commission for the Implementation of the HOPE agreement (which mandates garment factory compliance with international labor standards and Haitian labor law) have “backpedaled on the 2009 minimum wage law and issued public statements that support factory owners’ interpretations and non-compliance with the piece rate wage.”  The reports suggests that part of this backpedaling may be caused by President Michel Martelly’s efforts to promote increased international investment in Haitian sweatshops: “Making Haiti ‘open for business’ was a core piece of President Michel Martelly’s election platform that has won him political and economic support from the U.S. government, despite low voter turnout and flawed elections in 2010 and 2011. Part of the Martelly administration’s strategy to attract foreign investment has been to keep wages low so that Haiti can be competitive with the global low-wage market. Haiti has the third lowest monthly wages in the apparel industry, surpassing only Cambodia and Bangladesh. This U.S.-backed ‘sweat shop’ economic model is similar to the model in the 1970s and 1980s under former dictator Jean-Claude “Baby Doc” Duvalier.”