If people don’t know the facts about Haiti, there is no accountability and progress cannot be made. A recent article by Sean Penn in the Wall Street Journal provided a very optimistic view that was unfortunately inaccurate and left out some key points. The article below highlights some of those inaccuracies and the actual situation in Haiti–economically, in housing and in elections. 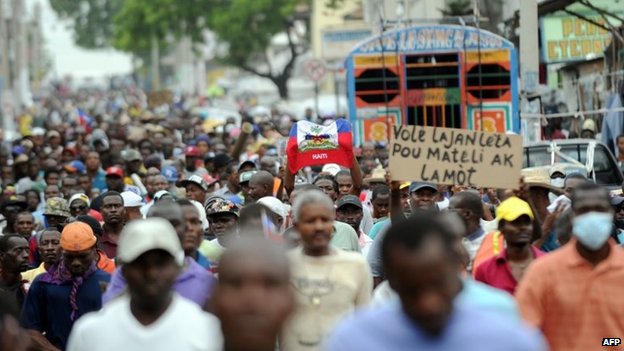 Despite this rising tide of protests, the messages most Americans hear about Haiti are filtered through the voices of celebrity experts like Sean Penn who recently denied anything is wrong and pronounced the small Caribbean nation has finally “turned a corner.”  In a recent tome published June 18 in Newsweek magazine Sean Penn wrote, “Haiti’s economy is among the fastest-growing in the Caribbean, as the government continues to make economic development a priority.”

At first glance, one might think Penn is correct for crowing about the handling of Haiti’s economy by his pals in the Martelly government given a recent International Monetary Fund (IMF) press release. On May 30 the IMF proclaimed, “Preliminary data for the first half of the fiscal year 2014 (i.e. October 2013 – March 2014) suggest that economic activity (as measured by gross domestic product, GDP), has advanced in line with projections, at a pace of about 3 – 4 percent. Inflation remained low, and it is projected to be in the mid-single digits by the end of the fiscal year (i.e. September 2014).” 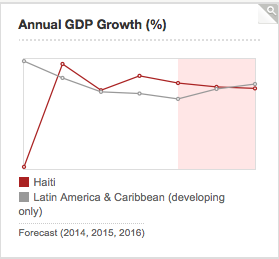 A closer examination of historical statistics on theWorld Bank’s website shows that Haiti’s annual GDP growth was actually at 5.6% when Martelly came to power through highly controversial elections in 2011. GDP growth in Haiti then dropped to 2.8% in 2012, rose to 4.3% in 2013 and is currently calculated at 3.6% for 2014 by the World Bank. Even if we take the IMF’s higher estimate of 4% GDP for 2014, that would mean that Haiti’s annual GDP actually shrank by 1.2% since Martelly assumed office. And while inflation may have dropped from 8.4% in 2011 to 5.9% in 2013, the World Bank’s official assessment of the overall economic condition in Haiti is far less rosy, “Over half of its population of 10 million lives on less than US$1 per day, and approximately 80% live on less than US$2 per day. It is also one of the most unequal countries, with a Gini coefficient of 0.59 as of 2001.” Although arguably outdated, this last admission of income inequality has remained demonstrably true for as long as Haitians alive today can remember. It is perhaps the reality of the Gini coefficient that exposes Penn’s blind spot, namely that Haiti’s national economy still remains hostage to the dictates of a powerful wealthy elite. Given this, it appears Sean Penn’s description of Haiti’s current economic juncture as “turning a corner” is an exercise in hyperbole. This is especially true in the context of the billions of dollars in international development aid pumped into Haiti’s economy under the mantle of earthquake relief since Martelly became president.

While citing roads being paved and homes built, rebuilt and retrofitted since the earthquake is all well and good, Penn also offered this statement to demonstrate his bullish view of Haiti’s progress, “Crime rates have dropped, and in May 2011, one political party transferred power to another peacefully after an election for the first time in modern history.” Penn’s assertion that crime rates have dropped is not borne out by any available data as made clear by this Haiti 2014 Crime and Safety Report offered by the US Department of State Bureau of Diplomatic Security which states, “Reliable crime statistics are difficult to come by; Haitian National Police (HNP) numbers indicating a modest drop in crime during 2012 were undercut by those from other security entities operating in-country that continued to show a steady rise since 2010. A comparative analysis of figures from various police/security entities operating throughout Haiti reflects a continuation of the trend in which incidents of crimes are inaccurately or under-reported. Haiti’s perennially weak judiciary exacerbates an already unsteady security environment.” 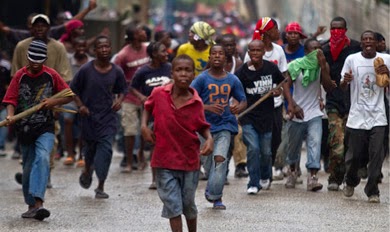 Penn’s other assertion that Martelly’s election in 2011 represented a peaceful democratic transition appears an absurd attempt to rewrite history. The violence preceding and following the first round of the November 2010 presidential elections in Haiti is well documented. In fact, it is equally documented that most of the violence was perpetrated by the supporters of Michel Martelly after it was announced by the electoral council that Jude Celistine and Mirlande Manigat would face each other in a second round of balloting. This violence led to an infamous intervention in Haiti’s election process by the Organization of American States (OAS), backed by the US, to overturn the results. The legitimacy of the election was already in question as “nearly three-quarters of the electorate didn’t vote…” according to Mark Weisbrot of the Center for Economic and Policy Research (CEPR). The abysmal participation in both rounds of the presidential elections that brought Martelly to power was the result of the banning of Haiti’s most popular political party, Fanmi Lavalas.

Based on what the OAS called a “re-tabulation”, Martelly went on to the second round that also saw its share of documented violence and intimidation. Weisbrot described the outcome resulting from, “The OAS’ actions in taking the unprecedented step of overturning an election, without a recount or evidence for its action…” Judging by the thousands of demonstrators who regularly take to the streets calling for Martelly’s resignation only to be consistently dismissed by Sean Penn, it wasn’t just the credibility of the OAS that was lost in this process.

Finally, Sean Penn has done much to transform Haiti into a cause celebre through his own intervention including his acceptance to act as an Ambassador-at-large for the Martelly government. Blurring the line between humanitarian and political operative, he has married his reputation to that of Martelly and the success of the regime. This has arguably colored his interpretation and judgment of what “turning a corner” really looks like in Haiti. This seems more obvious when we take an accounting of the facts he chooses to ignore and the social forces he regular dismisses in Haiti as unworthy of equal billing when compared to his own relatively short-lived experience there.