Medika mamba, a local product that can restore malnourished children to health, is made by a nonprofit that uses sustainable methods – like buying peanuts from local farmers – to affect systemic change in Haiti. Because of free and subsidized food aid from USAID, this nonprofit, Meds & Food for Kids, is having trouble staying afloat. 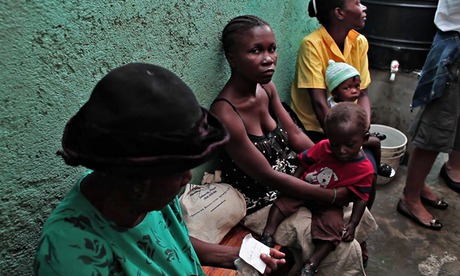 Haitian children are checked by health agents for signs of malnutrition. Photograph: MFK

Nearly 30 toddlers and their carers are crammed into the airless room at a makeshift malnutrition clinic atop a hill in Bahon, northern Haiti. This is a sleepy town along the Grande Riviere, an extravagantly named river that is a mere summer trickle through the north of Haiti.

Barring the odd snuffle, the room is silent. These children are not up to the mischief common among toddlers. They wait, listlessly, to be weighed and fed medika mamba, Haitian Creole for peanut butter medicine.

Medika mamba is a local product, manufactured by the non-profit Meds & Food for Kids (MFK) to standards approved by the World Health Organisation and the UN children’s agency, Unicef. Internationally trademarked as Plumpy’Nut by the French company Nutriset, a 150-sachet carton can restore a severely malnourished child to health in six to 12 weeks. About 22% of under-fives in Haiti are chronically malnourished.

Soon, medika mamba will be rolled out in Guatemala and beyond through Unicef’s programmes for malnourished people. But Haiti’s newest export will not be the measure of success it sounds.

“The World Food Programme (WFP) rang in December and said they wouldn’t be buying anything from us for four years because they had a corn-soy blend from USAid – for free. That was half of our annual income gone. We nearly closed in June,” says American paediatrician Patricia Wolff who founded MFK 10 years ago to make a local malnourishment product that would feed children, as well as benefit farmers.

An official explains that the donation of US corn-soy blend was bought by WFP last year with emergency USAid funding in advance of Haiti’s generally calamitous hurricane season. But it was not needed and “in 2014 USAid approved a WFP request to use the already in-country corn-soy blend stock for their ongoing programme of treating malnutrition”, the official said.

No one seems to have pondered the local implications of the decision. The official said it was standard practice for unused goods from one programme to be transferred to another. But, as the experience of medika mamba demonstrates, it is a risky policy for Haitian workers – closing the factory would have cost 42 local jobs, and hundreds of Haitian peanut farmers would have lost a reliable buyer. Wolff lobbied heavily against the “market-distorting” effects of importing a therapeutic food when a local one exists.

Wolff believes that with assured international aid buyers for medika mamba, the factory could boost production year on year, creating economies of scale and a sustainable local loop of supply and demand. “Producing 550 metric tonnes makes us sustainable because it covers the cost of everything,” she says.

In theory, that is development economics at its best – saving lives while sustaining change in low-income countries. It will tackle acute child malnutrition, which rose from 5.1% in 2012 to 6.5% last year, according to the Haitian government. And it creates much-needed jobs in a country where unemployment hovers around 40%. It is also able to redouble ongoing efforts to improve peanut farmers’ productivity and post-harvest handling and storage.

In the longer-term, Gain, a foundation that supports public-private initiatives that address malnutrition, sees the rising global demand for Plumpy’Nut as an export opportunity for Haiti’s MFK.

But whether this optimism is borne out in Haiti is dependent on whether Unicef, or other agencies, renew their order. Wolff says she lives from month to month and order to order, having no idea whether the factory will still be open next year. The loan from Gain, repayable over seven years at 6.75% interest, will need to be repaid.

The 300 peanut farmers in the north of the country, who have been selling their produce to MFK, will also be adversely affected if the factory closes.

There is little disagreement about the inherent value of localism in tackling child malnourishment in Haiti, and the WFP in Haiti says local food purchase remains a priority. But a WFP official admits that this year its nutrition activities are taken up by USAid’s Kore Lavi food voucher programme, which means it can’t buy from MFK at present.

But the politics, perverse logic and lack of coordinated thinking on aid from the west means well-meaning international agencies sometimes prefer to feed countries like Haiti rather than give them the means to feed themselves. As a result, local ventures such as MFK are constantly at risk of being forced out of business.

None of which bodes well for children like Bedline, who will inherit this poisoned legacy.