A summary of the current controversy regarding UN Secretary General Ban Ki-moon’s visit to Haiti. This is the first time he’s visiting Haiti since the cholera epidemic was started and the UN still does not take responsibility for causing it, though much evidence shows UN peacekeepers did. 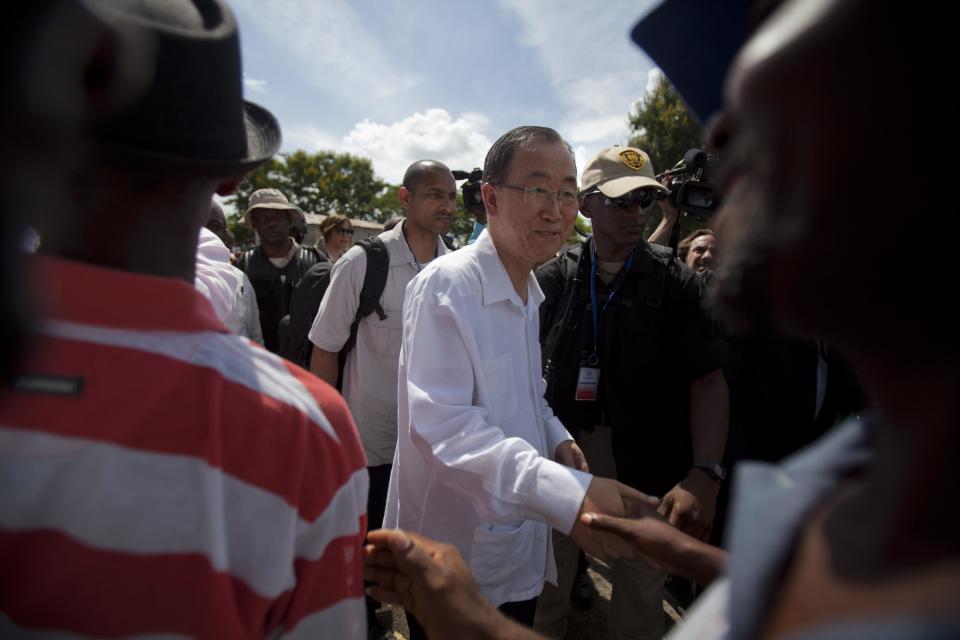 PORT-AU-PRINCE, Haiti (AP) — U.N. Secretary-General Ban Ki-moon arrived in rural Haiti on Monday to help launch a program to improve sanitation and fight the spread of cholera, a disease that many Haitians blame U.N. peacekeepers for introducing to the impoverished Caribbean country.

A deadly outbreak of the disease that followed Haiti’s devastating earthquake in 2010 has killed more than 8,500 people and sickened roughly 700,000. Studies have shown cholera-infected waste likely was introduced in one of Haiti’s biggest rivers by U.N. peacekeepers from Nepal, where the disease is endemic.

The outbreak is the subject of three separate lawsuits in U.S. courts. Earlier this year, nearly 1,500 Haitians filed a suit seeking compensation from the U.N. A previous claim by cholera victims was rejected by Ban and the U.N., which cited diplomatic immunity.

In an interview with The Miami Herald before his trip to Haiti, Ban said of the cholera outbreak: “Regardless of what the legal implication may be, as the secretary-general of the United Nations and as a person, I feel very sad.” He said the U.N. has a “moral responsibility” to help Haiti fight the epidemic.

In 2012, Ban announced a $2.2 billion initiative to help eradicate cholera in Haiti.

The U.N. chief’s visit was criticized by some human rights activists, who said the U.N. must accept responsibility for introducing the disease to Haiti and provide compensation to families.

“It is an insult to all Haitians for the secretary-general to come to Haiti for a photo-op when he refuses to take responsibility for the thousands of Haitians killed and the hundreds of thousands sickened by the U.N. cholera epidemic,” said Mario Joseph, a leading attorney for Haitian cholera victims.

On Monday, Ban was scheduled to visit a village in central Haiti with Prime Minister Laurent Lamothe to launch the “Total Sanitation” effort, which the U.N. says aims to boost sanitation and hygiene interventions in rural areas.

Ban is also expected to meet with Haitian families affected by cholera, a waterborne disease caused by bacteria found in tainted water or food. It can kill through dehydration if not treated in time.