Forced evictions are continuing in Haiti due to the government’s plans to rebuild Port-au-Prince. The poor are often left with just 10 minutes to gather their belongings before their homes are destroyed. This article describes this situation and other human rights violations related to development in Haiti, such as sweatshop labor.

Haiti: Where will the poor go?

During my last trip to Haiti this June with a delegation of students and human rights observers, we were exposed to the raw violence of the ongoing forced dispersal of the poor. On May 31, the Martelly regime intensified a process – in the name of “eminent domain” – of violently evicting the poor from their homes in downtown Port-au-Prince and then physically destroying their homes and businesses. 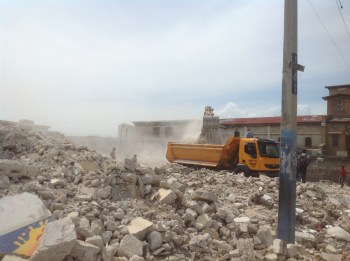 In downtown Port-au-Prince, the Martelly regime has been destroying homes of the poor in the name of “eminent domain.” – Photo: Seth Donnelly

We met with a group of men and women who had been subjected to this violence and we filmed their extensive testimony. They spoke of SWAT police and bulldozers coming at night, of having only 10 minutes to flee their homes, then witnessing the destruction of everything they had.

These survivors came to us with tears, anger and backpacks full of the only possessions they had left. They spoke of having to sleep in parks or on roofs, of children being put out on the street, of vulnerability to infection and ongoing harassment by the government.

One man, speaking on behalf of the Representatives of the Citizens of Centre-Ville Against Forced Displacement, stated that more than 62,000 people had lost their homes in downtown Port-au-Prince since May 31. The Martelly regime has not provided compensation and humane, alternative housing – in clear violation of the Haitian Constitution.

Indeed, official sources acknowledge that 400 properties have been destroyed, but only 17 people compensated.[i] Clearly, this grossly underestimates the numbers of people rendered homeless since legally registered pieces of property may actually consist of multiple dwellings of the poor with dozens of people living within them.

Secretary of State Planning Michel Presume stated earlier in the spring that the Martelly regime had taken all the necessary steps to compensate “the owners.” “We deposited this money in a deposit account. Owners have just to appear with their original titles, so they can receive from the Expropriation Committee the value of their land or their homes in accordance with the evaluation criteria for buildings.”[ii] Undoubtedly, the problem with this compensation formula is that it does not take into account the thousands of people dispossessed of their homes who were tenants, not owners.

Accompanied by a Haitian human rights journalist, we visited the areas of downtown that had been subjected to these demolitions; we saw massive destruction spanning blocks and blocks, including half of the General Hospital. We saw a bulldozer still at work and Haitians standing around the rubble, perhaps some still in shock, as if another earthquake had hit.

The initial eminent domain decree for the downtown was issued by President Preval in 2010, then repealed and re-issued (with some modifications) by Martelly. Ostensibly, the goal is to rebuild the administrative center of the city, but Martelly has also stated that he welcomes the involvement of “entrepreneurs” and the private sector.

Secretary of State Planning Presume stated that “the State has a budget of about 150 million U.S. dollars (for the construction of the administrative city) from several sources: Petrocaribe, Treasury and Fund of the Cancellation of Haiti’s Debt.”.[iii]

The people who shared their testimony with us blamed Martelly for their dispossession and current misery. According to these Haitians, the eminent domain project involves not just the reconstruction of the administrative center, but the transformation of the downtown into an upscale, commercial zone. Further investigation is required to determine other facets of this plan and sources of funding and investment involved, particularly those by the “private sector” welcomed by Martelly.

Where will the poor go? Where have so many tent city dwellers already gone? The Martelly regime has dismantled most of the tent cities through stick-and-carrot methods: Many families have received a one-time payment of $500 to relocate while others have been violently evicted from the camps.

The $500 payment is notoriously inadequate given the spike in land and housing prices and rents, a “market reaction” in large part to so many rich foreigners now living in Port-au-Prince as part of the NGO-U.N. network. Moreover, the price of rice – now “Made in the USA” – has increased dramatically in recent years, perhaps as much as 500 percent, further rendering this $500 aid package paltry.

We gained a sense of where so many desperate people are relocating when we visited Canara, a “city” of approximately 200,000 people seeking to eke out an existence in the arid, “dust bowl” hills in the outskirts of Port-au-Prince…