Jean-Claude Duvalier, notorious for the corruption and human rights abuses that reigned during his presidency, died of a heart attack this weekend. Some fear that justice for Duvalier’s victims can’t be served now that he’s died but many hope that the prosecution will continue with others who were involved in Duvalier’s human rights abuses.

PORT-AU-PRINCE, Haiti (AP) — Jean-Claude Duvalier, who presided over what was widely acknowledged as a corrupt and brutal regime as the self-proclaimed “president for life” of Haiti until a popular uprising sent him into a 25-year exile, has died. He was 63.

Duvalier died Saturday from a heart attack at the home of a friend in Port-au-Prince where he had been staying, said his lawyer, Reynold Georges, and several officials in the impoverished nation.

The former leader, known as “Baby Doc,” made a surprise return to Haiti in 2011, allowing victims of his regime to pursue legal claims against him in Haitian courts and prompting some old allies to rally around him. Neither side gained much traction, however, and a frail Duvalier spent his final years quietly in the leafy hills above the Haitian capital.

Haitian President Michel Martelly expressed his condolences to the former dictator’s family, making no mention of the widespread human rights abuses that occurred under Duvalier and his more notorious predecessor and father, Francois “Papa Doc” Duvalier.

“On behalf of the entire government and people of Haiti, I take this sad occasion to extend my sincere sympathies to his family, his relatives and his supporters across the country,” Martelly said.

The elder Duvalier was a medical doctor-turned-dictator who promoted “Noirisme,” a movement that sought to highlight Haiti’s African roots over its European ones while uniting the black majority against the mulatto elite in a country divided by class and color. 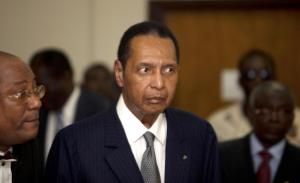 In 1971, Francois Duvalier suddenly died of an illness after naming his son to succeed him. At 19, Jean-Claude Duvalier became the world’s youngest president.

Jean-Claude Duvalier ruled for 15 years, retaining the Tonton Macoutes and the brutality of his father’s regime, though to a lesser extent. The son’s administration was seen as less violent and repressive than that of the father, though it perhaps was more corrupt.

Wisps of press freedom and personal criticism, something never tolerated under the elder Duvalier, emerged sporadically during the reign of “Baby Doc” because of international pressure. Still, human rights groups documented abuses and political persecution. A trio of prisons known as the “Triangle of Death,” which included the much-feared Fort Dimanche for long-term inmates, symbolized the brutality of his regime.

Since his return from exile, victims of the regime have testified in a criminal investigation of human rights abuses during his 15-year reign but the case has moved fitfully and there had been few signs of progress. His death brings an end to that effort without giving Haiti a chance to reconcile with that past, said Amy Wilentz, author of “The Rainy Season: Haiti Since Duvalier,” and other works about the country. 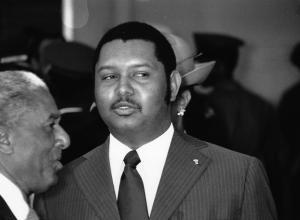 “What this means is that there will never be a trial against him and there won’t be a chance for the Haitian people to have justice and to purge from its soul the true horrors of the Duvalier era,” Wilentz said. “It’s an end but there is no closure that comes with it.”

As president, Duvalier married the daughter of a wealthy coffee merchant, Michele Bennett, in 1980. The relationship caused a scandal among old Duvalierists because she was a mulatto. The lavish wedding, which reportedly cost $5 million, also caused an uproar given Haiti’s deep poverty.

Under Duvalier’s rule, Haiti saw widespread demographic changes. Peasants moved to the capital in search of work as factories popped up to meet the growing demand for cheap labor. Thousands of professionals fled a climate of repression for cities such as New York, Miami and Montreal.

Tourists also flocked to the country, some in search of a form of tropical hedonism that included booze, prostitution and Voodoo ceremonies for which the country became legendary.

The National Palace became known for opulent parties as Duvalier’s wife took overseas shopping sprees to decorate and collect fur coats. Duvalier relished taking his presidential yacht out for a spin and racing about in sports cars. 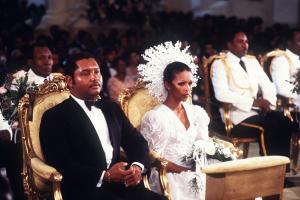 FILE – In this May 27, 1980 file photo, then Haitian president Jean-Claude Duvalier, left, is pictur …

Under mounting pressure from the administration of U.S. President Jimmy Carter, Duvalier made pretenses of improving the country’s human rights record by releasing political prisoners. Still, journalists and activists were jailed or exiled. Haitians without visas or money left by boarding flimsy boats in a desperate effort to reach Florida shores.

The New York-based Human Rights Watch estimated that up to 30,000 Haitians were killed, many by execution, under the regime of the two Duvaliers.

As Haiti’s living conditions deteriorated, Pope John-Paul II made a visit in 1983 and famously declared: “Things must change.”

Three years later, they did. A popular uprising swept across Haiti, and Duvalier and his wife boarded a U.S.-government C-141 for France.

The couple divorced in 1993. Duvalier later became involved with Veronique Roy, who accompanied him on his 2011 return to Haiti. 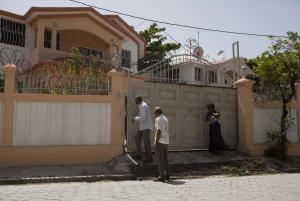 While in exile in France, Duvalier occasionally made public statements about his eagerness to return to Haiti. Supporters periodically marched on his behalf in the Haitian capital.

On Jan. 16, 2011, Duvalier made his surprise return. He said he wanted to help in the reconstruction of Haiti, whose capital and outlying cities were heavily damaged by a magnitude-7.0 earthquake the year before. Many suspected he came back in an effort to reclaim money he had allegedly stashed. Others said he merely wanted to die in his homeland.

Despite the occasional stay in the hospital, Duvalier seemed to enjoy his new life back home and was free to roam the capital. He was spotted attending government ceremonies and dining with friends in several high-end restaurants. In 2013 he began renovating an old house that Roy said had been destroyed in the wake of his 1986 ouster.