Haitian President Michel Martelly has appointed a new Prime Minister and announced plans to appoint a cabinet and electoral council. Normally, Parliament would have to ratify the Prime Minister and electoral council but since most Parliamentarians’ terms have expired, Parliament is now unable to reach a quorum. This has left Martelly to rule by decree since January 12. As protestors continue to demand Martelly’s resignation, Martelly finally acknowledged his responsibility for the current political crisis and promised to rectify the situation. 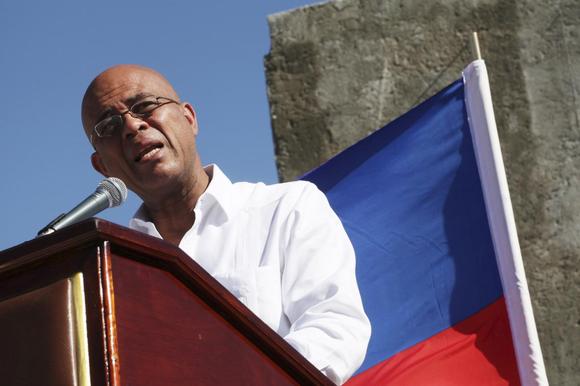 (Reuters) – Haitian President Michel Martelly announced plans on Friday to form a consensus government within the next 48 hours in a bid to rescue the impoverished Caribbean nation from a looming political crisis.

Martelly in a major speech urged anti-government demonstrators to maintain order as he seeks to steer the country toward new elections despite the dissolution of parliament earlier this week.

Speaking before an audience of political leaders and the foreign diplomatic corps, Martelly said he would swear in a new prime minister later on Friday before using his executive authority to appoint a cabinet and a new electoral authority.

“The weakness of our institutions and in particular the failure of the … legislature, cannot and should not last. It is urgent to correct these deficiencies as soon as possible because the big loser in this crisis remains our Haitian nation,” Martelly said.

Haiti has not held legislative or municipal elections for three years, leaving parliament without a quorum as terms expired and Martelly ruling by executive authority.

Under normal circumstances, the prime minister and the electoral authority would have to be ratified by parliament.

In a phone call with Martelly on Friday U.S. Vice President Joe Biden commended his efforts to reach a negotiated agreement with the parliament, but Biden expressed disappointment with the failure of parliament to pass an electoral law before it lapsed.

As he announced last month, Martelly said he would install former Port-au-Prince Mayor Evans Paul as prime minister, with the composition of the new government to be announced over the weekend.

For months Martelly battled opposition senators over an electoral law required before any vote can take place. He recognized on Friday that he had failed to hold elections, municipal or legislative since he assumed power in May 2011.

“Today, as president of all Haitians, I take the responsibility for this situation,” he said.

Some of his opponents have taken to the streets to protest poverty, corruption and what they consider his autocratic rule. They accuse Martelly of deliberately bringing about the crisis in order to rid himself of stubborn opposition in parliament.

“Martelly wanted to control everything and now he is controlling everything,” said Arnold Elie, who joined a protest of about 1,500 people in downtown Port-au-Prince on Friday morning.

“We are protesting to tell Martelly: This country is not just for you. We want him to be arrested and judged for his financial crimes,” said Elie.

Martelly invited protesters to join a national dialogue he started in recent weeks with political parties.

“I recognize the right of all those who have chosen the path of peaceful demonstrations to express their demands and frustrations,” he said.

Adding a touch of political mystery to his speech, Martelly said he would encourage a major discussion over Haiti’s constitution, including “necessary amendments,” but did not elaborate.

He stressed he had no intention of changing the constitution to seek re-election, which is currently banned.

“To avoid any misunderstanding … I want to emphasize clearly and loudly, that … in no case will I be a candidate in the next election,” he said.

Haiti is scheduled to hold presidential elections at the end of the year. Municipal and legislative elections are unlikely to be held before this summer due to complicated logistics and the need to find foreign donors to foot the bill.