As of the latest tally in April 2015, cholera had killed 8,927 Haitians and infected approximately 740,000. The recent appeal filed against a NY Federal Judge in the cholera case is reaching larger audiences, spreading awareness about UN culpability in causing and not effectively recompensing for this 2010 outbreak in Haiti. 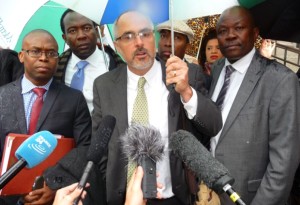 On May 27, lawyers representing thousands of Haitian cholera victims filed an appeal against Federal Judge J. Paul Oetken’s Jan. 9, 2015, decision that the United Nations is legally immune from prosecution for importing cholera into Haiti and unleashing an epidemic which has killed about 9,000.

Lawyers from the Boston-based Institute for Justice and Democracy in Haiti (IJDH), the San Francisco-based Center for Law and Global Justice, and the Miami-based firm of famed immigration lawyer Ira Kurzban filed a 62-page brief which argued that Judge Oetken erred in ruling that the UN and its military force, the UN Mission to Stabilize Haiti (MINUSTAH), were immune “despite having violated their treaty obligation to provide a mode to settle private law claims,” and UN Secretary General Ban Ki-Moon and former MINUSTAH chief Edmond Mulet “are entitled to immunity in this case simply because they ‘hold diplomatic positions.’” The lawyers also argued that, by granting these immunities, Judge Oetken was violating the plaintiffs’ “constitutional rights to access the federal courts.”