Hundreds of Thousands of Migrant Workers Face Deportation from DR

After a 2013 ruling left hundreds of thousands stateless, the Dominican Republic (DR) faced an international outcry. Now, DR threatens to deport countless workers who have failed to meet arbitrary registration requirements. Other nations’ desires to deal freely with their own migrant workers have muted international opposition to this human rights violation and there is an additional concern here: Both Dominicans of Haitian descent and those who have met the deadline may be caught in the fray due to racial profiling.

Migrant Workers in Dominican Republic, Most of Them Haitian, Face Deportation 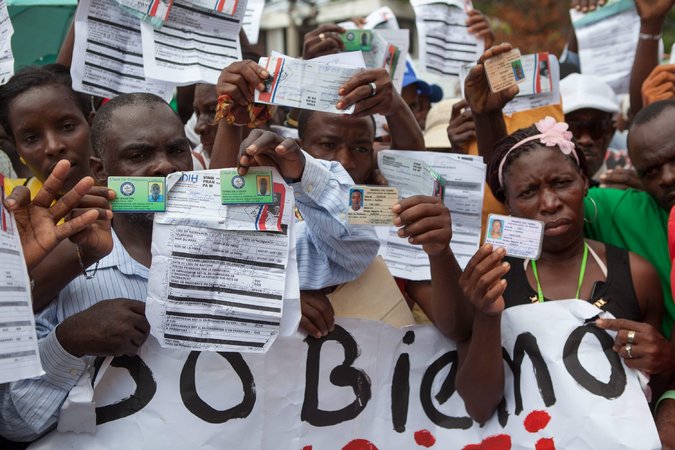 MEXICO CITY — Hundreds of thousands of migrant workers are facing deportation from the Dominican Republic, the latest in a series of actions by the government that has cast a light on the long-troubled relationship with its Haitian neighbors.

Undocumented workers in the Dominican Republic have until Wednesday to register their presence in the country, in the hope of being allowed to stay.

The government has said that nearly 240,000 migrant workers born outside the Dominican Republic have started the registration process. But there are an estimated 524,000 foreign-born migrant workers in the country — about 90 percent of whom are Haitian, according to a 2012survey — leaving a huge population of migrants at risk of deportation.

Human rights groups had hoped the government would delay the registration deadline, given the difficulties faced by many in producing documents and satisfying bureaucratic requirements. But there were no indications that the authorities would stall their plan to begin ejecting the workers, about half of whom had failed to register, according to figures circulated by the Dominican government.

“The signals are clear,” said Beneco Enecia, the director of Cedeso, a nonprofit group that works with migrants and Dominicans of Haitian descent. “The Dominican government is setting up logistics, placing vehicles and personnel to start the process of repatriation.”

Haitian workers, who have crossed the border for generations to cut sugar cane, clean homes and babysit, have long experienced an uneasy coexistence with their wealthier Dominican neighbors. It is a relationship fraught with resentment, racial tension and the long shadow of the massacre of tens of thousands of Haitian laborers ordered by the Dominican dictator Rafael Trujillo in 1937.

Dominican officials have long said that they have borne the brunt of Haiti’s economic troubles, both before and after the 2010 earthquake that devastated their neighbor and sent a stream of people fleeing across the border.

International outcry prompted the government to soften its stancesomewhat with a law the next year. It promised citizenship to children whose births were registered in the nation’s civil registry, and a chance at nationalization for those not formally registered.

Advocates and international legal bodies said it still fell short. Anything less than full citizenship left these people stateless, belonging neither to their birthplace nor their family’s homeland, they argued. But that group does not appear to be the target of the deportations, at least not directly.

Andrés Navarro García, the Dominican minister of foreign relations, told reporters on a trip to Spain that the majority of those subject to deportation had already started the registration process and would not be deported.

For those who do not enter the process, Mr. Navarro said, there will be no mass roundups to deport people and the protocol is still being worked out. Instead, the government will handle each case individually and work in conjunction with the Haitian government for an orderly transfer of citizens.

Responding to questions from other regional leaders, however, Mr. Navarro asserted the position his government has taken in the past: that the Dominican Republic, as a sovereign nation, has the right to determine its own immigration policy without the interference of other states.

The migrant workers who have registered so far have been granted a 45-day grace period during which they can complete the process. Migrants are expected to produced a signed work permit from employers, who can be reluctant to provide such documentation.

The deportations, which could begin in the coming days, have generated a more muted response from other countries when compared with the uproar stirred by the 2013 court ruling, which essentially ordered the mass denationalization of as many as 200,000 Dominican-born children.

One reason for the relative diplomatic silence, including from the United States, is the troubled relationship many countries have with migrant workers who enter their borders illegally seeking employment, advocates argued.

“Migrant deportation is something states don’t want to get into because they themselves want to continue to do such deportations,” said Liliana Gamboa, who coordinates an anti-discrimination project for the Open Society Foundations in the Dominican Republic. “I don’t know how much pushback there can be from other states.”

Some advocates worry that the mechanism to identify potential deportees will be to target any dark-skinned people suspected of Haitian descent, whether they have papers or not.

“There are no adequate screening mechanisms,” said Angelita K. Baeyens, the programs director at the Robert F. Kennedy Center for Justice and Human Rights.

Efforts to process children born in the Dominican Republic whose parents never formally registered them have fallen short. Fewer than 9,000 of an estimated population of tens of thousands have registered themselves as foreigners, as required by the law, a process that in theory puts them on a path to naturalization.

The status of these children is unclear, potentially leaving them vulnerable to deportation as well.

“If these massive deportations occur, will they include by mistake people who were born in the Dominican Republic?” Ms. Gamboa said. “Will they follow the standards of international law? Will Haiti be able to receive this number of deportees? And what would their status be in Haiti?”

Others have raised questions about the impact on the Dominican economy. For generations, Haitians have assumed the jobs that many Dominicans do not want, filling a vital part of the labor market, often at below market rates. Businesses, some experts say, could see their production costs rise if a large chunk of the labor force is removed.

But that remains a distant threat. For now, activists like Mr. Enecia of Cedeso say that many are resigned to their deportation.

“The criteria is based on racial discrimination,” he said. “Fear, desperation and anguish are the expressions of the people. They feel helpless.”