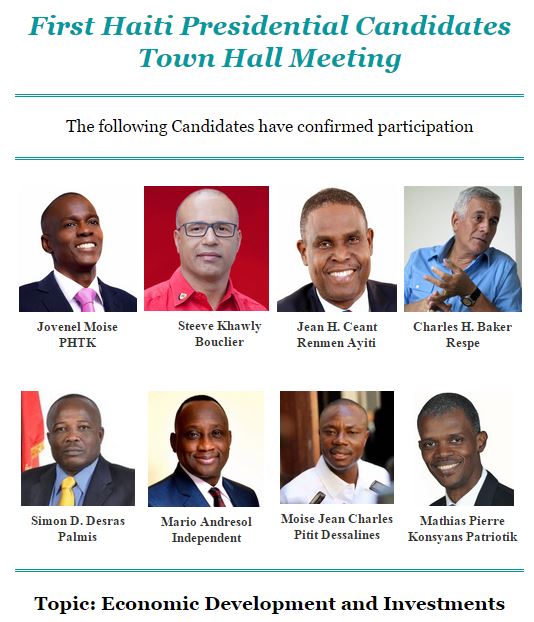 Eight of Haiti’s presidential candidates have confirmed their participation in a town hall meeting on economic development and investments in Haiti.

The Haitian economy has been recovering since the earthquake. However, recently, there has been some turbulence; its currency has been losing value, economic growth is stagnant, diaspora and foreign direct investment is on the decline. The next Haitian President will need to tackle a variety of issues from energy, infrastructure, education, import/export, to inflation stabilization etc., in order to redefine Haiti’s place in the 21st century global market place. This upcoming election is the first in recent memory to be centered on key economic issues. The confirmed presidential candidates will be discussing their vision and strategies on the state of leadership, governance and economic development of Haiti and strategies to attract foreign direct investments.

The Town Hall will be moderated by Roberson Alphonse of Le Nouvelliste, Dr. Robert Maguire, Professor at George Washington University Elliott School of International Affairs and others to be confirmed.

In an effort to foster collaborative engagement amongst attendees and online participants, questions will be drawn from a live audience and social media (i.e. facebook, twitter). #HRATOWNHALL

This event is open to the media and the public.

Registration is required and opens September 1.

The town hall will be webcast live via the internet and broadcast live via Radio Television Caraibes (RTVC) in Haiti, Ayiti TV in FL and other media outlets.