A scientific report conducted by doctor and specialist in cholera epidemiology, Renaud Parroux, shows that the cholera epidemic was indeed introduced by UN peacekeepers. When the epidemic first started, many were hesitant to “blame” the UN for it but it soon became clear that someone needed to be held accountable for the epidemic to be controlled and eliminated.

Cholera and blame in Haiti 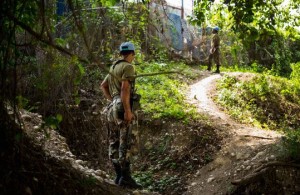 After an explosive cholera outbreak in Haiti in October, 2010, an Editorial in Lancet Infectious Diseases opined that assigning blame as to the origin of the outbreak was unhelpful.1 Subsequently, the outbreak turned into the largest cholera epidemic in the world with 745 558 cases and 8972 deaths (as of July, 2015).2 Blame is often portrayed as a vengeful act—finding fault so as to inflict emotional pain. Yet in public health circles, the definition of blame might have another connotation: “to hold responsible”.3 In Haiti, avoidance of responsibility for cholera quickly became entangled in international politics. Without insight and steerage, control and elimination efforts were hindered and irregular.

A UN peacekeeping camp in the central regions of the country hosted soldiers from a cholera-endemic country (Nepal) and in a village at the camp’s edge, doctors of the Cuban Medical Brigade recorded the first cholera cases, which suggested a possible origin of the outbreak.4 Haiti was recovering from an earthquake that occurred 9 months earlier and many felt the presence of UN troops was essential for the country’s stability. But there was a dilemma: should the origin of the epidemic be investigated or avoided, so as not to enrage the Haitian people against stabilising UN peacekeepers? Although the Pan American Health Organization, WHO, and the US Centers for Disease Control and Prevention chose to not investigate the potential involvement of the UN military camp, the Haitian government asked the French Embassy for assistance with an outbreak investigation, led by Renaud Piarroux. The ensuing scientific report provided epidemiological arguments that cholera had been introduced by the UN peacekeepers.5 After a draft of the report was leaked to the media in December, 2010, the UN secretary-general ordered a follow-up investigation. The investigation panel—selected by the UN—concluded that the source of the Haiti cholera outbreak was due to contamination of the river flowing by the village next to the UN camp, with a pathogenic strain of a south Asian type of Vibrio cholerae introduced by human activity.6Additional evidence also pointed to the UN troops as the probable source of the epidemic,7 and in 2014, the panel stated that personnel associated with the UN peacekeeping camp were the “most likely source of introduction of cholera into Haiti”.8