A recent Amnesty International report shows that for decades, the Dominican government has implemented laws to render generations of Dominicans of Haitian descent stateless.  A recent ruling has left tens of thousands “ghost citizens” without basic human rights such access to health care and education. 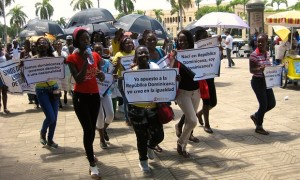 The Dominican Republic has violated the human rights of tens of thousands of people by stripping several generations of citizenship, according to a scathing new report by Amnesty International.

The report details decades of discriminatory practices codified into laws that have turned Haitians and their DR-born children into “ghost citizens”. These stateless people lack identity papers for work, healthcare, schooling or the right to live in either nation on the island.

“With the stroke of a pen, authorities in the Dominican Republic have effectively wiped four generations of Dominicans off the map,” said Erika Guevara-Rosas, Amnesty’s Americas director.

Since the 1990s, Dominican authorities have created a “legal maze” of bureaucracy to recover their papers, the group said, noting a 2013 court ruling that rendered stateless anyone born in the country to an undocumented foreign parent. The ruling was enforced retroactively to 1929, leaving as many as four generations of Dominicans of Haitian descent stateless and without valid documents.

“The ruling was outrageous,” said Chiara Liguori, Amnesty’s expert on the Caribbean and the author of the report.
“Most of these people have never claimed Haitian nationality,” she said. “Dominicans who’ve never been to Haiti, have no ties there, are now obliged to prove themselves: to say first, ‘Look I’m a foreigner,’ and then apply for naturalization over two years. And to apply doesn’t mean they’ll get it.”

The ruling rendered people stateless even outside the country, prompting protests in New York and international denunciations from human rights groups who say the government is depriving people of basic needs.

“These people have a very strong sense of belonging to this country,” Liguori said. “They want to help and make a contribution. They don’t know what to think of themselves any more.”

The rights group says these retroactive decisions have created “a continuing cycle of alienation and marginalization down the generations”. Although there are no clear estimates for how many people are stateless, Amnesty estimates the law affects several tens of thousands of people.

In 2012, a UN and EU survey found more than 200,000 people in the Dominican Republican had at least one foreign parent and were of Haitian descent.

Children with at least one Dominican parent are entitled to citizenship, though many struggle to receive recognition.

Yolanda Alcino, a 25-year-old Dominican of Haitian descent, told the Guardian she was registered at birth but has been refused an identity card for the past eight years. The second oldest of nine siblings, she said her family illustrates “the complete, complicated reality” of life in the country – some of her brothers and sisters have papers, others do not.

“It’s hard to find work, we can’t get into school, get my children into school,” she said. “We’re discriminated against, and without education, without work, life is more difficult in almost every way.”

Alcino said that earlier this year the authorities told her that without an identity card she could not register her children or file a domestic violence complaint against their father.

“I can’t get my children their identities because of this,” she said.

The rights group interviewed dozens of people for its 60-page report, including one woman, speaking anonymously, whose daughter was unable to register.

“It’s hard to find work, we can’t get into school, get my children into school,” she said. “We’re discriminated against, and without education, without work, life is more difficult in almost every way.”

Alcino said that earlier this year the authorities told her that without an identity card she could not register her children or file a domestic violence complaint against their father.

“I can’t get my children their identities because of this,” she said.

The rights group interviewed dozens of people for its 60-page report, including one woman, speaking anonymously, whose daughter was unable to register.

Jessica Profeta, a 14-year-old Dominican-born girl of Haitian descent, said her parents were refused a birth certificate repeatedly, and could not enroll her in school for a lack of papers. When her parents tried to enroll her in a naturalization plan, the line was so long that the office closed before her father reached the doors.

“I would like her to go to the university, to have a better future,” he said.

Programs such as a six-month naturalization initiative are insufficient, Guevara-Rosas said, since they was poorly advertised and demanded a list of papers that many could not supply. The naturalization program, for instance, expired in February and asked for testimony from a midwife or seven witnesses to prove a person was born in the country.

As in the US, undocumented workers are largely relegated to difficult work for paltry pay. Women often cannot find work except as cleaners and servants, and men often find themselves enduring brutal conditions on bateyes – sugar cane farms.

The Dominican government maintains that most of the people now without citizenship are in fact Haitian, even though Haiti’s own laws cast Dominican-born children into limbo. For 25 years Haiti banned dual nationality, and for more than 30 years has held that people who choose or “actively enjoy” another nationality will lose their legal status as Haitian nationals.

Dominican authorities also deny arbitrary deportations of some 40,000 people; an adviser to the president said in August that the people had voluntarily left the country. This summer the Haitian prime minister, Evans Paul, said that 14,000 people, mostly children and young adults, crossed the border in less than a week, threatening a humanitarian crisis.

The US and other countries have urged Dominican authorities to respect the rights of undocumented people, and to let international observers monitor the deportations.

Responding to criticism, the Dominican Republic created “regularization” programs, predicting more than 100,000 people would apply to enter a process of waiting periods, forms and “auditing”.

Amnesty and other activist groups have denounced the programs as insufficient, and called for restoring Dominican nationality to people whose births were registered previously, reforms to the naturalization process and an investigation into discrimination by public officials.