Opposition candidates from Haiti’s presidential elections are threatening  to force Haiti into a transition government unless changes are made for a runoff in December. Candidates who oppose the latest results have dubbed themselves the “G8” and do not believe fair elections are a possibility under the Martelly regime.

Célestin and others issue elections ultimatum in Haiti 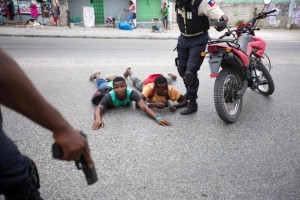 An alliance of Haitian opposition presidential candidates led by second-place finisher Jude Célestin is threatening to force Haiti into a transition government — unless changes are made in the country’s electoral council and police hierarchy ahead of next month’s planned presidential runoff.

The group of eight candidates, dubbed the G8, made its demands in a signed communique late Sunday, shortly before midnight. A transition government, it said, could last as long as 24 months during which time the priorities will be national dialogue, reforming the state, scripting a new constitution and organizing new elections.

“The G8 is convinced that honest, free, transparent and democratic elections cannot be obtained under the presidency of Joseph Michel Martelly without changes in the [Provisional Electoral Council], without changes in some units of the [Haiti National Police] and the command at departmental offices, and without the end of reprisals and repression by police against peaceful demonstrators,” the candidates wrote.

Two presidential candidates, participating in protests, were recently hurt when police fired on the crowd to disperse them. Protesters, meanwhile, have been complaining about arrests and intimidation by a specialized police unit.