Reactions to preliminary results of parliamentary vote in Haiti 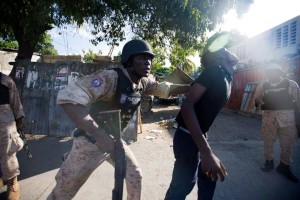 Antonio Cheramy, known as “Don Kato,” was elected with 297,260 votes in the Oct. 25 legislative runoff elections to represent the country’s most populous region, the West Department that includes metropolitan Port-au-Prince. The vote total, posted on the council’s website after midnight Sunday, is more than what 52 of the 54 presidential candidates received during balloting held on the same day, according to preliminary presidential results issued Thursday.

“The battle I was carrying out reached the population,” said Cheramy, 40. “These results are incontestable and show that the population voted me.”

The parliament announcement came on a day of more protests and arrests of demonstrators who have taken to the streets in the capital and the northern city of Cap-Haitien to protest against the preliminary results of the first round of the Oct. 25 presidential elections. Those results put government-backed candidate Jovenel Moise in a likely runoff with opposition candidate Jude Célestin. Citing the allegations of “massive fraud” by local observer groups, Célestin called the results a “farce” and has asked supporters to remain mobilize despite the government’s attempts to crack down on protests.