Challenges of primary election results and reactions across Haiti

Candidates such as Dr. Maryse Narcisse of Famni Lavalas challenge the results of the electoral vote.  This has also led to civil unrest throughout the country in the form of isolated tire burnings, rock-throwing and blockage of traffic by supporters in the central plateau and northern regions of Haiti.

Part of the article is posted below: 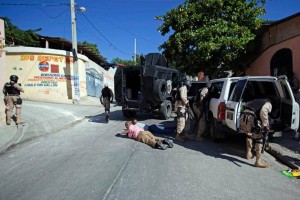 Two presidential candidates who object to their showings in the Oct. 25 elections have filed legal challenges.

Fourth-place finisher Dr. Maryse Narcisse of former President Jean-Bertrand Aristide’s Fanmi Lavalas party, and Vilaire Cluny Duroseau, who finished 42nd out of 54 candidates, are alleging they were cheated out of votes. Narcisse’s hearing has been scheduled for 10 a.m. Tuesday before the Departmental Bureau of Electoral Contestation (BCED), said lawyer Gervais Charles.

“We are contesting the credibility of the process,” said Charles, who led a similar legal challenge in 2010 on behalf of President Michel Martelly after he contested his third-place finish behind Jude Célestin, then the government-backed candidate, amid allegations of fraud and irregularities. “We are legalistic, and we know who we are going before to plead our case, the same people who are at the base of all the violations.”

“We’re not naive,” he added. “We know the legal route has its limits and the people need to feel their weight, and keep carrying on a political battle.”